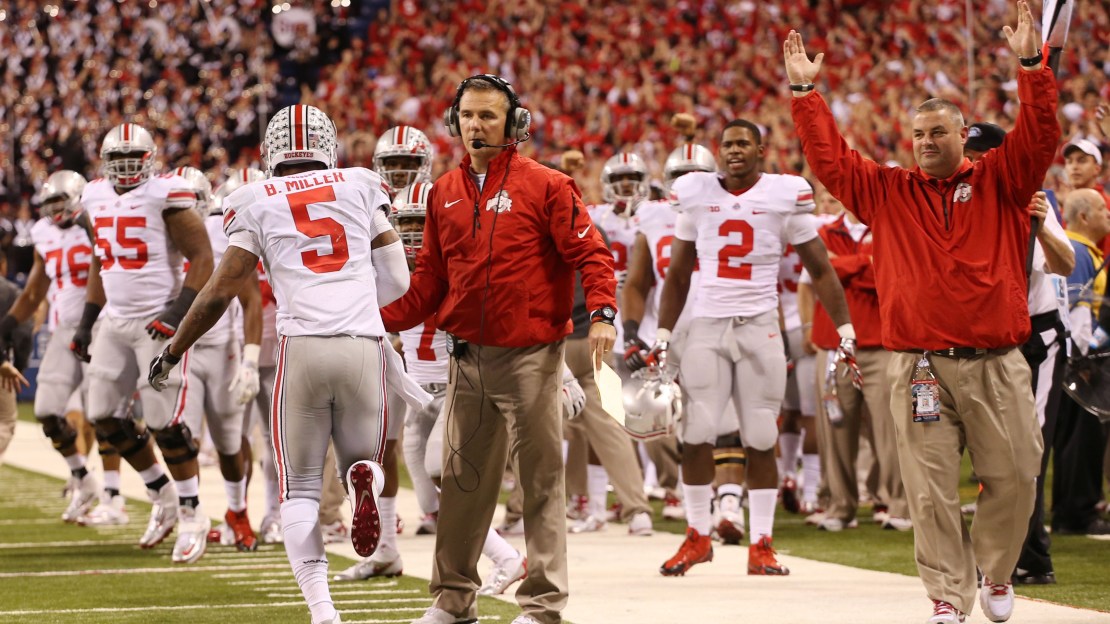 Yes, Ohio State would rather be playing in Pasadena, Calif., for the national championship vs. another ACC school, Florida State. But this is still a BCS bowl vs. a very good Clemson team. And that means it?s a chance for the Buckeyes to score some credibility points and quell critics who say OSU played a soft schedule.

Since the start of 2012, the Buckeyes and Tigers rank in the top 10 in the nation in points per game and winning percentage. Combined, they're 45-5 since the start of last season. If that doesn?t get you jacked, nothing will.

This trip to the Orange Bowl is a shot at redemption for Clemson after it was crushed, 70-33, two years ago in this game by West Virginia after winning the ACC title. Of course, this is the first meeting between these teams since the infamous 1978 Gator Bowl, a 17-15 Clemson win in which Woody Hayes punched Tigers linebacker Charlie Bauman and subsequently was fired to end his illustrious career in dubious fashion.

Storyline: Will there be a better quarterback battle in the postseason than Braxton Miller vs. Tajh Boyd? Of course not. Combined, Miller and Boyd have accounted for 70 touchdowns this season. That battle of signal-callers is one big reason why this shapes up as one of the best bowl clashes. An OSU loss would fuel the fire of critics who say Ohio State isn?t an elite team. A win could be a catalyst to another national push in 2014. Both of these squads were in the thick of the national championship chase this season. Clemson's hopes ended on Oct. 19 with a blowout loss to Florida State at home, 51-14. The Buckeyes? dream perished in the Big Ten title game with a 34-24 loss to Michigan State.

Player on the spot: Braxton Miller. If the dynamic Ohio State quarterback doesn?t star, the Buckeyes figure to lose. The Big Ten championship game was a perfect example. Yes, Miller ran for 142 yards, but he completed just 8-of-21 passes for 101 yards with a touchdown. Expect Clemson to try to make Miller beat it with his right arm, too.

Best individual matchup: It won?t get much better than Ohio State offensive tackle Jack Mewhort vs. Clemson defensive end Vic Beasley. Mewhort is a bellwether of a strong Buckeyes line who may be the top offensive lineman in the Big Ten. Beasley was a finalist for the Hendricks Award, given to the nation?s top defensive end. His 12 sacks rank third in the nation.

Best unit matchup: Ohio State secondary vs. Clemson receivers. This looks like a mismatch in the Tigers? favor. The Buckeye secondary has been burned time and again, as five teams have ripped the Buckeyes for 300 or more yards passing in 2013: Michigan State (304); Michigan (451); Indiana (320); Northwestern (343); Cal (371). This is a Clemson attack that averages 329.3 yards passing. Meanwhile, Ohio State is 11th in the Big Ten in pass defense (259.5 ypg). There is talent in the OSU secondary, led by cornerback Bradley Roby. But it will be put to the test by a strong Clemson wideout unit led by Sammy Watkins.

1. Carlos Hyde. The guy is a beast, often carrying the Ohio State offense. He ran for 1,408 yards and 14 touchdowns despite missing the first three games serving a suspension. Hyde works behind what may be the best offensive line in the Big Ten. If he gets rolling, Ohio State is difficult to stop.

2. Braxton Miller. Aside from his clunker game vs. Michigan State in the Big Ten title game, when he hit just 8-of-21 passes, Miller has been spectacular. There is no better running threat under center in the nation than Miller, who has 1,033 yards rushing with 10 touchdowns. And he also has improved as a passer, throwing for 1,860 yards and 22 scores. Miller has nice deep targets in Philly Brown and Devin Smith. They have combined for 18 touchdowns, and each has 655 yards receiving.  Bottom line: Miller is the Swiss Army knife of college quarterbacks.

3. Urban Meyer. His sideline acumen is renowned. And his resume dwarfs that of Clemson coach Dabo Swinney. Meyer will have the Buckeyes well-prepared.

1. Clemson QB Tajh Boyd. He?s really good. The Tigers rank 11th nationally in passing offense (329.3 ypg) and 13th in total offense (502.0 ypg), averaging 40.2 points. Boyd has completed 67.6 percent of his passes for 3,473 yards and 29 touchdowns this season. Boyd also can beat foes with his feet but prefers to sling it. Interesting side bar: Boyd almost was a Buckeye. Coming out of Hampton (Va.) Phoebus, Boyd was down to Ohio State and Oregon with less than a week before Signing Day. Most recruiting sites had Boyd pegged for Ohio State, but he stunningly opted for Clemson. If Boyd had tabbed Ohio State, how would that have impacted Braxton Miller?s recruitment? Fascinating.

2. Psyche. What will be Ohio State?s mind-set? Will the Buckeyes want to be in this game after coming within a season-finale win vs. Michigan State of playing for the national championship? The biggest thing the Buckeyes have on the line is their reputation. A loss to an ACC team would undermine the mojo OSU built during a 24-0 unbeaten skein the past two seasons.

3. Pass defense. Ohio State?s isn?t good. Time and again this season, the Buckeyes have been torched. How bad is it? OSU is 11th in the Big Ten in pass defense (259.5 ypg). No doubt, Buckeye corner Bradley Roby will need to limit the big plays of star Clemson wideout Sammy Watkins, who has 85 receptions for 1,237 yards and 10 touchdowns. This will be a great matchup to watch.