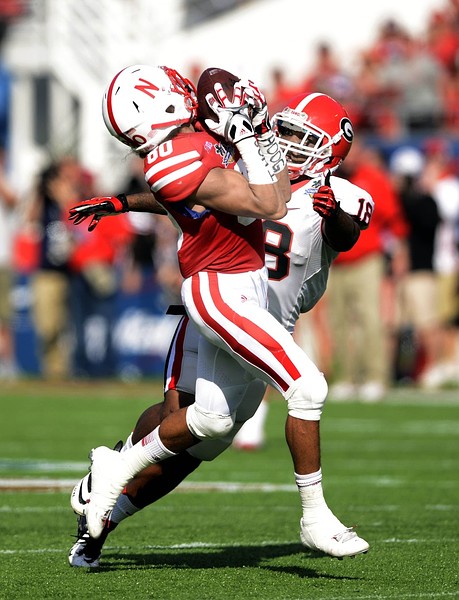 Two traditional powers square off for a second season in a row in the postseason. And each will do so without the quarterbacks they began the season with. Nebraska?s Taylor Martinez has been shelved with a variety of ailments-shoulder, hip, abdomen, ankle–missing eight of the last nine games. Aaron Murray?s season was wrecked by a knee injury suffered vs. Kentucky on November 23.

Last year?s meeting in the Capital One Bowl was tied, 31-31, in the fourth before a fumble by Nebraska back Ameer Abdullah opened the floodgates for a fast Georgia finish.

Storyline: This is a rematch of the last year?s Capital One Bowl clash, won 45-31 by the Bulldogs. The Cornhuskers are looking to end the season on a positive note, having lost two of their last three games. In the postseason, the Huskers have lost three in a row. Bo Pelini came under scrutiny in 2013 for his behavior and the direction of the program. A big effort vs. a traditional SEC power would help augment his sagging image. If Nebraska fans think their team has been injury-plagued, consider this: The Bulldogs have suffered six season-ending ACL knee injuries to starters on offense.

Player on the spot: Tommy Armstrong, Jr. The redshirt freshman quarterback needs to throw well for the Huskers to win. He should be ready for action after a late-season ankle injury derailed him after he took over for an injured Taylor Martinez back in October. Armstrong completes just 53 percent of his passes and has seven touchdown throws and seven picks. Yes, he?s good at running the option, but he needs to hit some passes to loosen the Georgia defense. If Armstrong struggles, Nebraska could turn to Ron Kellogg III, who started the finale vs. Iowa, but struggled in hitting 19-of-37 passes for 199 yards with a touchdown and two interceptions. But remember, he did complete the game-winning Hail Mary vs. Northwestern.

Best individual matchup: Nebraska CB Stanley Jean-Baptiste vs. Georgia WR Chris Conley. Conley paces Georgia with 42 catches for 605 yards. He burned the Huskers for touchdown catches of 47 and 89 yards last year. At 6-3, 206 pounds, Conley is a match up problem. The 6-3, 220-pound Jean-Baptiste is one of the few Nebraska corners who can stand up to him. The Huskers must limit big plays in the passing game. Getting a good pass rush from the likes of end Randy Gregory will help. He led the Big Ten with 9.5 sacks.

Best unit matchup: Nebraska defensive line vs. Georgia offensive line. Running back Todd Gurley has dealt with lingering effects from injury; still, Georgia wants to get him amped for a rushing attack that?s averaging 176.1 yards. The Huskers have a salty line that continues to improve behind Gregory and Jason Ankrah, among others. But NU is just eighth in the Big Ten in rushing defense (161.2 ypg). If the Huskers lose this battle, they figure to lose this game. Gurley is a good one.

THREE REASONS TO BE OPTIMISTIC:

2. Health. Bo Pelini said shortly after the bowl announcement that he expects his team to be as healthy as it has been in some time once this game rolls around. The o-line, in particularly, has been racked by injury. But time and time again, the unit has responded.

3. Facing a backup quarterback. Yes, junior Hutson Mason looked good in a double-overtime win over Georgia Tech in the Bulldogs? finale. But, he?s not Aaron Murray. Look for Nebraska to come after Mason and give him some different schemes to deal with. He will be without some top wideouts who are out with injury in Malcolm Mitchell and Justin Scott-Wesley. If Mason struggles to pass, the Huskers can commit to slowing running back Todd Gurley. He?s a speedy back who is the team?s top offensive option for a UGA rushing attack that ranks 11th in the SEC.

THREE REASONS TO BE WORRIED:

1. No mojo. The program?s Legends Division title hopes unraveled quickly in November. The Huskers lost two of their last three games, falling at home to Michigan State and at home vs. Iowa. The lone win was an overtime decision at Penn State. Then, speculation about Bo Pelini?s future swirled until the A.D. issued a statement. What?s the mind-set of this team?

2. Passing. It?s not very good. Nebraska?s aerial game ranks 93rd in the nation, averaging 199.5 yards passing. Without some semblance of a passing game, the athletic Georgia defense will be able to commit to stuffing the run. If the Huskers throw over 30 passes, it won?t be a good thing.