Volleyball Report: B1G is best of the best 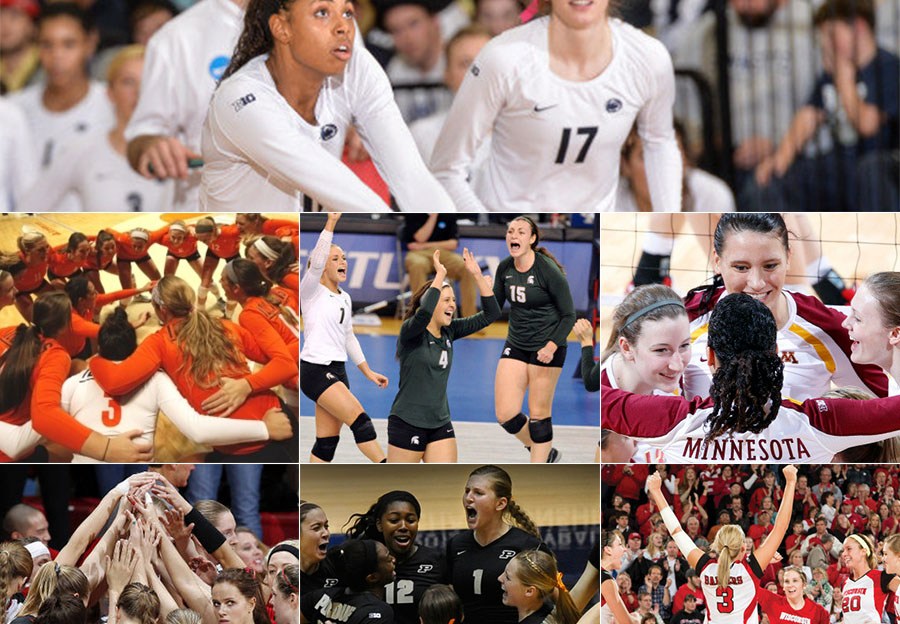 Coaches, players and fans can all agree that the Big Ten represents the best caliber of volleyball in all the nation. The conference proved that on Sunday, as an unprecedented seven teams reached regional play, setting a new NCAA record.

Big Ten teams make up nearly half of the field remaining in the tournament, as the Sweet 16 features all but one league team that made the postseason.

With both Nebraska and Illinois hosting regionals this weekend and two different sites featuring three of four remaining teams out of the Big Ten, a Final Four littered with Big Ten teams is still a possibility. A postseason, which has already witnessed history for the Big Ten, is likely to see a few more firsts before the tournament comes to a close.

The Tigers were the nation?s last unbeaten, having not lost more than one set in a match all year. However, Missouri had yet to face a Big Ten foe. Purdue introduced the SEC Champion to a style of play it had not witnessed and defeated Missouri on its home floor to advance to Sweet 16 for the fifth time in the past six seasons.

Four players would finish in double-figure kills and the hallmark of Purdue volleyball, ball control, allowed the Boilers to eliminate the SEC?s top-seeded team. Junior Val Nichol finished with her second triple-double of the season and continued to show why she belongs in the conversation as one of the Big Ten?s best players. A roster with four redshirt seniors, talented youth and tournament experience is dangerous this time of year and the Boilers run may be only just beginning.

Last season was all about ?unfinished business? for Nebraska volleyball and that business remained unfinished after a loss to the Ducks in the regional final in Omaha last year. The Huskers erased the memory of that defeat on Saturday by sweeping Oregon and earning a chance to host regional play at the Devaney Center with an opportunity to return to the Final Four for the first time since 2008.

In just her second tournament match, freshman Kadie Rolfzen took over for the Huskers both at the net and defensively as she led the team in kills (15) and digs (17).  The task gets more challenging going forward, but the 8,000 fans at Devaney will only increase their intensity as the matches become more meaningful.

In the national perspective, the debate over volleyball conference supremacy has shifted between the Big Ten and the Pac-12 each season. To me, that discussion shifted one direction a few years back.

This year represented the fourth consecutive season where the Big Ten has had at least six teams reach the Sweet 16, while the Pac-12 has not topped four teams in the regional semifinals in one tournament during that span. The Big Ten has won five of the last seven national titles, and the Pac-12 has claimed one championship in the last seven years. In head-to-head matchups in the tournament this year, the Big Ten has gone 4-0 thus far against Pac-12 opponents. Granted those four matches were played on the home court of Big Ten teams and those teams were higher seeded than their Pac-12 competition, but the trend has become one-sided.

The Big Ten and Pac-12 will play at least one more match in the tournament, with the potential of possibly four more if the bracket plays out a certain way. But in recent memory, it has not been much of a contest, the Big Ten trumps the Pac-12.

The State Farm Center will witness NCAA Tournament volleyball for the first time in its history, as Purdue and Illinois meet for the third time this season. The Boilers and Illini split the first two meetings, with both teams winning on their home floors. While the second meeting was a straight-set sweep for Illinois, the first was a tightly contested affair.

Playing in Mackey Arena back on October 11, the first set was decided in extra points and the third and fourth sets were won 25-23 by Purdue. The Boilers won in four, but the match could have just as easily gone the Illini?s way. In Huff Hall in November, Illinois out-hit Purdue, .369 to .217, but the Boilers were in the midst of a four-match losing streak that had seen the heart of their team, Carly Cramer, not practice for two weeks.

The teams that will meet Friday night will be considerably different than the ones that met earlier this season, with both playing their best volleyball over the past few weeks. Add to it, two of the countries best student sections in the Spike Sqaud and Boiler Block, and Friday?s match is the must-watch regional semifinal of the bunch.

The Badgers have surpassed all expectations for this season and advanced to the Sweet 16 for the first time since 2006. Sweeping both Milwaukee and California now sets up a match with the Seminoles to reach the regional final.

Florida State knocked off perennial SEC contender Florida in the second round and features the nation?s 17th-best hitting team (.271). FSU is led by the Walch sisters, Nicole and Elise, who average 3.56 and 2.83 kills per set on the season. Elise is a familiar face for Badger fans as she played her first season in Madison before transferring to Florida State. The only player who shared the floor with Walch in Wisconsin was senior libero Annemarie Hickey. So much has changed for the Badgers since Walch?s only year, there shouldn?t be much familiarity left.

Deme Morales will need to keep up her miraculous ability to wipe away any height discrepancy between her and right side blockers, as she?ll meet 6?5? Elise Walch at the net. The Big Ten?s smallest front row player, at 5?7?, hit .404 with 21 kills in the first two rounds and also had 18 digs.

Heading into this match, a lot of people will point to the meeting in the Big Ten opener, where Michigan State beat Penn State in five sets in Rec Hall, as a reason why the Spartans and Nittany Lions will play a close regional semifinal Friday. After all, Michigan State is the last team to beat Penn State prior to the Lions 21-match win streak, so it stands to reason that it could do it again. A lot has changed since September 27.

Penn State has lost just four sets since the middle of October, Deja McClendon has elevated her game to elite all-around status, and the Nittany Lions have held onto set leads consistently since that first loss.

Clearly, Michigan State has the confidence that it can beat Penn State. However, after what we witnessed on BTN on November 2, and the way the second half of the Big Ten season has played out, it seems unlikely the Nittany Lions will fall to the Spartans for a second time this year. I said it entering the tournament, the only thing between Penn State and another national title is an error plagued match or significant injury.

It?s back-to-back Pac-12 foes for Minnesota after the Gophers survived Colorado on Saturday night to reach their second straight regional semifinal under Hugh McCutcheon. Seniors Tori Dixon and Ashley Wittman both had 19 kills, while underclassman Hannah Tapp and Daly Santana were also in double-figures.

Minnesota has not had a signature win this season, losing to the top two teams in the Big Ten in each of the four meetings vs. Penn State and Nebraska. The Gophers have beat the teams they were expected to beat and have yet to pull off an upset.

Friday presents another opportunity, but the Cardinal will be a tremendous challenge. Stanford is third in the nation in blocks per set this year and fourth in the nation in hitting percentage. The Cardinal are led by AVCA 1st team All-American and 3-time All-Pac-12 selection Carly Wopat, who is one of five players on the team averaging at least 2.7 kills per set. Stanford finished one match behind Washington for the Pac-12 title and swept its first two opponents to get to the regional semifinal.

The Gophers will have to handle the balance of the Stanford attack and get the same on their side of the net as the seniors and youth will need to excel to pull off the upset and advance.

(A win for Minnesota and Penn State would set up the second consecutive year that these two teams would meet with a trip to the Final Four on the line. Penn State won last year?s meeting in West Lafayette.)

The lone Big Ten team separated from the packs in Champaign and Lexington is Nebraska. The Huskers will face another of the nation?s hottest teams for the 2nd time in two weeks. Nebraska lost to Penn State on November 30 as the Nittany Lions earned their 19th consecutive win and will now face the Toreros who are on a 17-match win streak of their own.

San Diego earned the No. 9 seed in the tournament with a record of 24-3 entering the postseason, its lone losses coming to No. 1 Texas, at BYU and against St. Mary?s. The Toreros handed No. 6 seed USC its first loss of the season back when the Trojans were the nation?s No. 1 team in September and also beat Illinois in four sets in a tournament at Iowa State. However, San Diego has only played one ranked team since beating USC and, like the majority of the field, has never played in Devaney. West Coast Conference Coach of the Year Jennifer Petrie?s team has experienced a similar atmosphere this year though and came out victorious when it knocked off Hawaii in the Stan Sheriff Center where 7,000 were in attendance. We?ll know Friday if the long layoff between facing top quality opponents has hurt the Toreros.

San Diego is second in the nation in kills per set this year and features another balanced attack with five players averaging over 2.5 kills per set. The Huskers will need Big Ten Player of the Year Kelsey Robinson to get back to her double-digit ways after totaling just 8 kills against Oregon and hitting .222.

Catching a top team early in the season when lineups are still being sorted out and freshman have jitters is a considerable difference than meeting in the tournament when a team is in top form. Nebraska should end the Toreros streak.