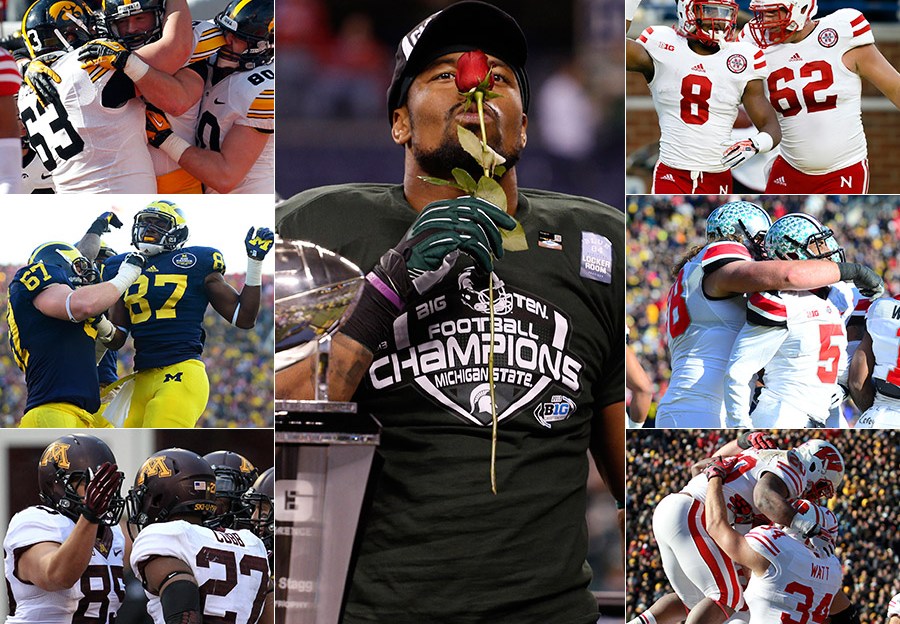 The Big Ten bowl matchups have been announced. And there are some interesting clashes.

The Big Ten failed to get a team in the BCS title game for the sixth season in a row, but there are two teams in BCS bowls. Here?s a quick look at the seven Big Ten bowl matchups.

The Spartans are in Pasadena for the first time since the 1987 season, when they beat USC. Michigan State will be tested by a good Stanford team led by rising star coach David Shaw. The Cardinal were in this game last season, knocking off Wisconsin. And this will be their fourth BCS bowl in a row. Shaw coaches a tough, physical Stanford team that in many ways mirrors the style of Mark Dantonio. So, if you live smash-mouth football, watch this game.

A great quarterback battle between Braxton Miller and Tajh Boyd. In fact, not many bowls will have a better matchup of signal-callers. The Buckeyes defense struggled down the stretch, allowing 603 yards and 41 points to Michigan and 438 yards and 34 points to Michigan State in the last two games. Clemson?s offense will be another tough test for this maligned Buckeye defense, as the Tigers are 12th in the nation in passing (329.3 ypg) and 12th in scoring (40.2 ppg). Boyd is a special talent with 3,473 yards passing with 29 TD tosses. Long-time OSU fans will remember these schools met in the 1978 Gator Bowl, which became famous after Woody Hayes slugged Clemson linebacker Charlie Bauman-ending Hayes? illustrious career in a dubious fashion.

Can't wait to watch that massive Wisconsin o-line contend with South Carolina stud end Jadeveon Clowney in the Capital One Bowl. Remember that hit Clowney delivered vs. Michigan last year in the postseason? Sure you do. We all have seen it 1,233,457 times. The matchup between Steve Spurrier and Gary Andersen will be one of the best coaching battles of the postseason. This Gamecock offense vs. this Badger defense. Nice, as well. Can Wisconsin run enough with Melvin Gordon and James White vs. South Carolina? The Gamecocks will know what?s coming, and they have an athletic defense unlike any the Badgers have seen in 2013.

This conjures memories of the classic 2005 Capital One Bowl clash between the Hawkeyes and Bayou Bengals, won by Iowa on a dramatic 56-yard touchdown heave by Drew Tate to Warren Holloway in the waning moments to earn a 30-25 win. Both of these teams are physical squads that like to run to set up the pass. Without a doubt, this will be the best team that the Hawkeyes have faced all season. Does Iowa have enough skill/speed on offense to score on this athletic LSU defense? The Iowa defense catches a big break, as LSU quarterback Zach Mettenberger will miss the game with a knee injury suffered in the finale vs. Arkansas.

An interesting clash pitting Brady Hoke vs. all-time coaching great Bill Snyder. No Big Ten team in a non-BCS bowl will be more scrutinized. The Wolverines need to finish the season on an up note after going 1-4 in November during a highly disappointing season. And the lone win came in triple overtime at Northwestern. An inconsistent offense was the biggest issue. The good news for Michigan: KSU?s offense isn?t great, which means the Wolverines may not need to rely on their dysfunction offense much to win. Still, Michigan?s offense could have issues moving the ball and scoring on K-State, which is 36th in the nation in scoring defense (23.7 ppg). This is a physical Wildcats team will try to run to set up the pass. Snyder?s teams typically play with discipline; and they rarely beat themselves. So, Michigan will have to play smart and limit turnovers.

This clash may have the least buzz of all the Big Ten bowls. Why? Because it?s a rematch of the Capital One Bowl from last year, a 45-31 Georgia win. And this is one of the least impressive Bulldogs teams under Mark Richt, as injuries proved to be ruinous for Georgia in a disappointing season. Oh, and each team will be using backup quarterbacks. Still, this will be a good chance for the Huskers to score a win over a SEC team and help Bo Pelini quell his critics. Nebraska finished the season losing two of its last three games. The Bulldogs will be without quarterback Aaron Murray, who suffered a season-ending injury in November, augmenting the Huskers? chances to win. So, a young and improving Nebraska looks to have a good chance to succeed and build confidence for 2014. And the Huskers offense should be healed up-and hopefully better than the last time we saw it vs. Iowa.

Two programs on the rise face off. The Orange don?t have a dynamic offense, ranking 100th in the nation in scoring (22.8 ppg). And Syracuse struggles to pass, ranking 102nd in the nation (181.5 ppg). Minnesota lacks a dynamic offense, as well. Both teams have solid defenses. Bottom line: This may be a low-scoring game. A win in the Texas Bowl would be Minnesota?s ninth this season. It would also be the eighth time in program history and only the second time in the last 108 years that Minnesota would finish the season with nine wins. The Gophers beat Syracuse 17-10 at home last season on the strength of two Donnell Kirkwood rushing touchdowns.