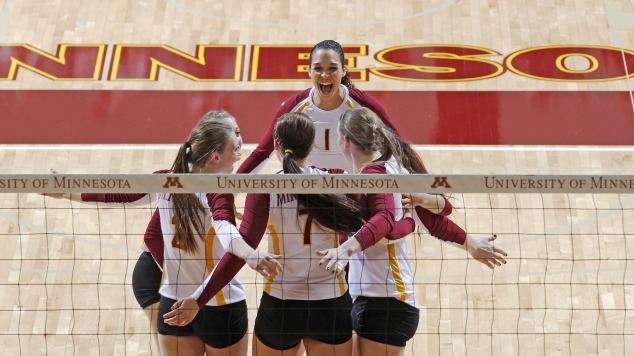 Seven Big Ten women's volleyball teams advanced to NCAA regional semifinals this weekend. Illinois (Marquette), Minnesota (Colorado), Nebraska (Oregon), Penn State (Utah), Purdue (Missouri) and Wisconsin (Cal) all advanced to the Sweet 16 on Saturday, while Michigan State (Kentucky) did the same Sunday. Catch up on all of the latest results in this post.

ILLINOIS 3, MARQUETTE 1 | RECAP
Illinois got off to a slow start against No. 22 Marquette, with the Golden Eagles bringing their A-game early on at Huff Hall. But Illinois quickly converted the Huff energy into their own and snatched the victory out of the Golden Eagles' talons. Sophomore Jocelynn Birks finished with 19 kills and junior Liz McMahon ended with 17 to send the Illini (18-14) soaring on to the Sweet Sixteen.

MICHIGAN STATE 3, KENTUCKY 1 | RECAP
Michigan State defeated host No. 17 Kentucky 3-1 (25-22, 21-25, 25-22, 25-20) on Sunday afternoon. No. 20 MSU advances to the NCAA Round of 16, which will be held at Kentucky's Memorial Coliseum next weekend. The Spartans will play Penn State, while Stanford and Minnesota will also compete in Lexington. Kentucky ends its season with a 22-9 overall record, and with its loss, eliminates all SEC teams from the NCAA Tournament. MSU improves to 23-11.

NEBRASKA 3, OREGON 0 | RECAP
An outstanding night from Kadie Rolfzen and the Husker block powered the eighth-seeded Nebraska volleyball team to a 3-0 sweep over 25th-ranked Oregon in a second-round NCAA Tournament match Saturday night in front of 8,012 fans at the Devaney Center.

PENN STATE 3, UTAH 0 | RECAP
Behind a match-high offensive performance from sophomore Megan Courtney, the No. 2 Penn State women's volleyball team (30-2) knocked off Utah (21-13) in straight-sets (25-14, 25-15, 25-11) Saturday evening to advance to the Regional Semifinals of the 2013 NCAA Tournament. The victory extends the current Nittany Lion winning streak to 21 consecutive matches and stretches the PSU all-time record in the tournament to 79-26.