Dienhart: Relive it quarter by quarter 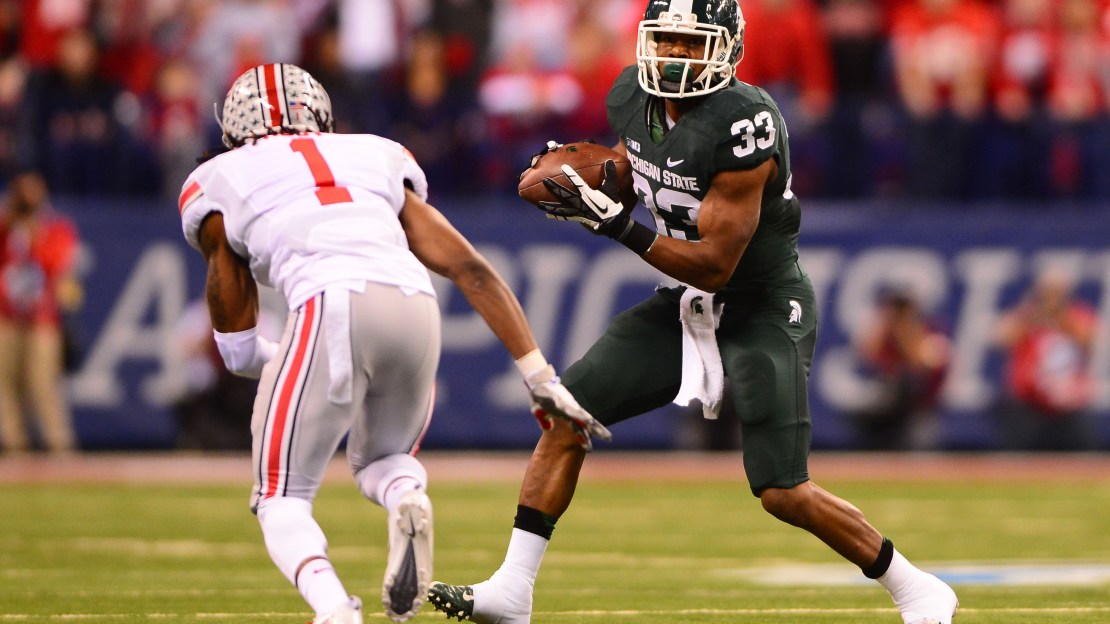 BTN.com senior writer Tom Dienhart posted quick takes after each quarter of the Big Ten Football Championship from his perch at Lucas Oil Stadium in Indianapolis. Also, follow him on Twitter @BTNTomDienhart.

Quick take: MSU trailed, 24-20, entering the fourth quarter. But the Spartans outscored the Buckeyes, 10-0, in the final stanza. When push came to shove, the MSU defense stifled the Ohio State offense in the final 15 minutes to secure the school?s first Rose Bowl since the 1987 season.

Key moment: After stuffing Ohio State on a fourth down, MSU took over at their 39-yard line and proceeded to march 61 yards in six plays for a score. Jeremy Langford rumbled 26 yards up the middle for a touchdown that basically sealed the game in giving MSU a 34-24 lead with 2:16 left.

Key play: Facing fourth-and two from the MSU 38-yard line and trailing 27-24, the Buckeyes opted to go for it. Miller tried to run around right end but gained just one yard. MSU took over on downs with 5:41 remaining.

Key number: 25, yards for OSU in the fourth quarter.

Key penalty: With Michigan State facing a second-and 10 from the OSU 26-yard line, Connor Cook threw to Tony Lippett. OSU defensive back Doran Grant was flagged for pass interference with 12:37 left. MSU went on to score a TD, with Cook hitting tight end Josiah Price for a nine-yard touchdown pass to five the Spartans a 27-24 lead with 11:41 left.

Key score: Michigan State opened the quarter trailing, 24-20. But then it went to work quickly, scoring a touchdown on its first possession of the fourth quarter and never looking back with Connor Cook hitting tight end Josiah Price for a nine-yard touchdown to put the Spartans back in the lead at 27-24. It was MSU?s first lead since holding a 17-10 edge at halftime.

Quick take: Ohio State officially took control of the game in the third quarter erasing a 17-0 deficit and taking a 24-20 lead with 24 unanswered points. OSU had 151 yards in the quarter; MSU had just 67.

Key moment: Ohio State took the opening drive of the second half and marched 75 yards on seven plays, capping the drive with an 8-yard touchdown run by Braxton Miller that tied the game at 17-17. You could feel mojo swinging at that point toward the Buckeyes, who trailed 17-0 at one point.

Key play: On a fourth-and-two late in the third quarterback, Connor Cook called his own number and gained six yards to pick up a first down. It was the second time in the game Cook converted a fourth down with a keeper. And, just like the first conversion in the first quarter, this drive ended with a field goal (44 yard) by Michael Geiger to cut OSU?s lead to 24-20 with 2:29 left in the third quarter. That ended a 24-0 run by the Buckeyes. MSU needed those points to stem the tide.

Key number: 67, yards for MSU to 151 for OSU. The Buckeye offense is coming to full life.

Key score: Miller bolted in from six yards out with 5:36 left in the third quarter to make it 24-17 OSU. It was the Buckeyes' first lead of the game.

Quick take: Ohio State found its groove in the second quarter, stringing together some good drives and totaling 170 yards after having just 28 in the first quarter. The best drive was a five-play, 84-yard effort that resulted in OSU?s first TD of the night to get it back in the game after falling behind 17-0 after Connor Cook heaved a perfect 33-yard strike to Tony Lippett.

Key moment: In the dying moments of the half, Ohio State marched 53 yards in seven plays for a field goal as the half expired. The key play was a Braxton Miller-to-Jeff Heuerman 36-yard pass to the MSU 11-yard line that set up a 28-yard field goal by Drew Basil that made it 17-10 Michigan State at the half. We have us a ball game.

Key play: With the pocket breaking down around him on a second-and-eight from the OSU 18-yard line, Braxton Miller broke contain and bolted 48 yards. It was vintage Miller. Up to that point, OSU had just 38 yards. OSU went on to score its lone TD of the half on the series.

Key number: 324, combined yards in the second quarter. The teams combined for just 71 in the first quarter.

Key score: Trailing 17-0 and needing something positive to happen, Ohio State marched 84 yards on five plays to cut the MSU lead to 17-7 on a 20-yard TD toss from Braxton Miller to Philly Brown. OSU needed the score to stay in the game. Mission accomplished.

Quick take: The Michigan State offense had some success in the opening stanza, controlling the ball and clock with 13 yards rushing and 35 yards passing. MSU had the ball for 10:45 in the quarter.

Key moment: Michigan State took the opening kickoff and executed a 14-play, 47-yard drive that used 8:31 and resulted in three points. It set a good tone for the Spartans.

Key play: Facing a fourth-and-one at the Ohio State 31-yard line, Michigan State went for it. Connor Cook executed a quarterback sneak for two yards. The drive eventually stalled, but the Michael Geiger nailed a 40-yard field goal for the lone points of the quarter.

Key number: 28, yards for Ohio State in the first quarter.

Key penalty: There were three, all on Ohio State. Two pass interference calls and interfering with the punt returner. The Buckeyes need better discipline. The biggest of all was P.I. that gave MSU a first down on its scoring drive.