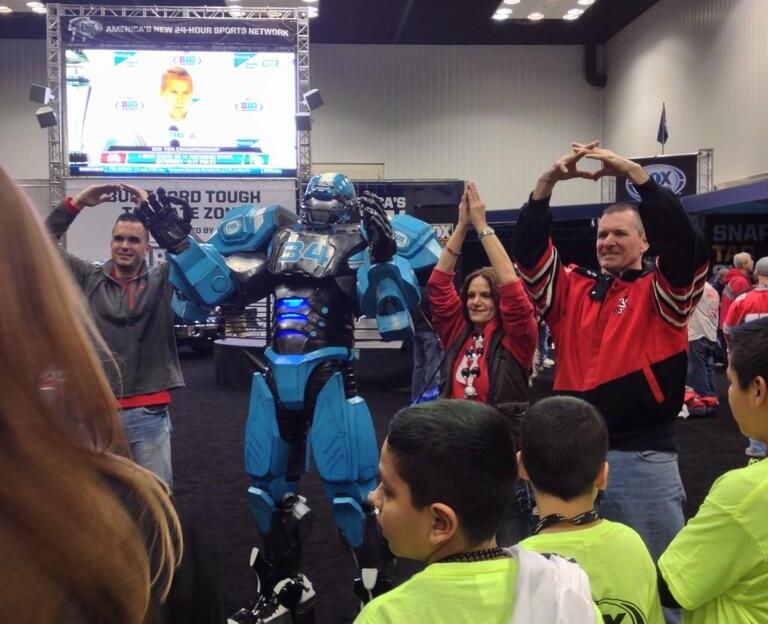 After addressing the media on Friday afternoon at Lucas Oil Stadium, both Urban Meyer and Mark Dantonio made one thing clear – This year's Big Ten Championship Game is going to be a good one. Scratch that. A GREAT one.

Fans of both schools began crowding the streets in downtown Indianapolis on Friday in anticipation for tomorrow night's big game.

I made it a point to take in every moment of it and tried to capture the best of the best leading up to the third annual Big Ten Football Championship game. Remember, Dantonio and the Spartans were here two years ago and came up just short of the ultimate prize, falling to Wisconsin 42-39 in a heartbreaking defeat. For Meyer, this is the first time his Buckeyes have played in the Big Ten Championship game.

Best sight from Lucas Oil Stadium: You think it's snowing where you are? Look at the snow come down in this great shot taken right outside of Lucas Oil Stadium, the sight of Saturday's Big Ten Championship Game. Best Quote (Urban Meyer): Asked if he likes Conference Title games: "Do I like them… Well, I like when we win them. I think it's great for college football."

Funniest Quote (Urban Meyer): Reporter tells Urban Meyer that at some point, he is going to lose a football game. Meyer – "Thanks. I appreciate that (laughter). Get his name for me."

Best Quote (Mark Dantonio): "As Muhammad Ali would say, we're going to find out just how great we are tomorrow night."

Funniest Quote (Mark Dantonio): Reporter asks what prompted Dantonio to tell his players they would be the ones playing for a Big Ten Championship last year after a 7-6 season. Says it "came out of left field a little bit." Dantonio- "You got it. That would be me- kind of out of left field (laughter)."

Best Player Tweet (Michigan State): MSU punter Mike Sadler not impressed with the view from his hotel room in Indianapolis.

Stellar view of downtown Indy from the hotel room! pic.twitter.com/2kbM26e9je

Isn't that the truth…