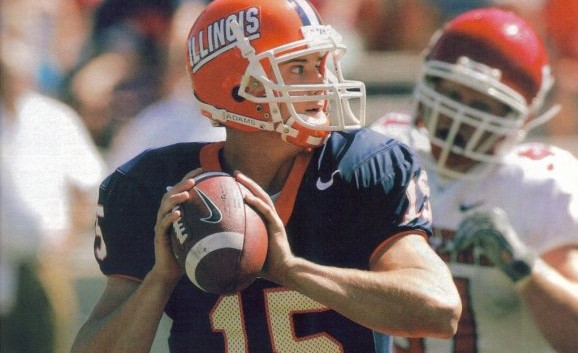 In the coming weeks, students on every campus in the Big Ten Conference will return home for the holidays. The idea of returning home, whether it's at the end of the calendar year or the conclusion of a student's collegiate career, is one that often brings mixed emotions. "After graduating, I returned to my alma mater, Riverside-Brookfield High School, where I coached, taught, and got involved with Young Life Ministries," Brasic said. "It was there I learned how to build relationships with people, and that sports can be a tool to use for a much greater purpose then making money."

While working at his alma mater, Brasic was inspired to return to the familiar surroundings of the University of Illinois campus.

Brasic is now the college and evangelism pastor at the Urbana Vineyard Church. His work with students off the field has brought a new appreciation for his time as the starting quarterback of the Illini, and has also developed a stronger passion for the campus.

"I would have never thought in a million years I would be back on the campus of Champaign-Urbana," said Brasic. "But here I am, and I have never been so satisfied in my life."

After he was named the 2001 Chicago Sun-Times Player of the Year in high school, Brasic signed a letter of intent to play football for Ron Turner and the Fighting Illini. It was the first time he would follow his heart to Champaign.

"I grew up watching the Illini hoping that one day I would wear the orange and blue uniform," Brasic said. "Running out of the tunnel into Memorial Stadium was a dream come true. I will never forget my days playing QB for the Illini."

Brasic was the starting quarterback for the Illini in 2005 and into the 2006 season, where he set the record for rushing yards in a season by a quarterback with 420, and finished his career only 76 yards shy of the university's career mark.

To learn more about Brasic's work on campus, go to: timbrasic.com.