Dienhart: Laying out Big Ten Title Game from A to Z 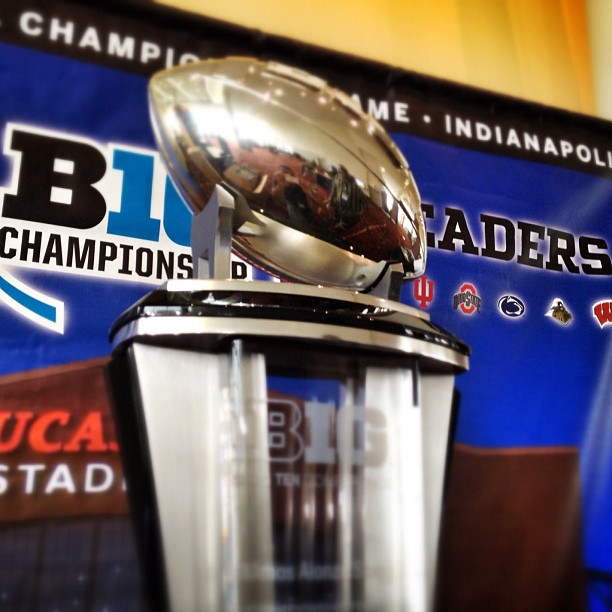 The Big Ten Football Championship game is being analyzed from every possible angle. And that?s just on this website. But let?s not stop there as we are days away from the big game between No. 2 Ohio State and No. 10 Michigan State. I'm headed to Indianapolis for all of the hoopla on Friday and I'll be covering Saturday night's game of course, too. So here is my  look at the big clash from A to Z.

A, is for Anticipation. This is the most anticipated Big Ten championship game yet. Yes, this is only the third. Still, having 12-0 Ohio State vs. 11-1 Michigan State with a potential spot in the BCS title game on the line for the Buckeyes is delicious.

B, is for Big tight ends. I?m talking about Ohio State?s tandem of Jeff Heuerman (6-5, 252) and Nick Vannett (6-6, 255), which could loom large. Each is able to get down the seam in the pass game for some big gainers to help loosen the MSU defense. These guys could be underrated weapons on Saturday night. You heard it here first.

C, is for Connor Cook. The Michigan State sophomore has settled what was a muddled and messy quarterback position back in September. Cook seized control of the post at Iowa. Since then, he?s averaging 214 passing yards and completing 60 percent of his attempts with 12 touchdown tosses and just four picks. How good has he become? Cook earned second-team All-Big Ten honors from the coaches.

D, is for Darqueze Dennard. The Michigan State stud has been named the Big Ten?s Defensive Back of the Year. And he just may be the top cornerback in the nation. Ohio State has a star corner in Bradley Roby. Enjoy watching these two future first-round draft choices.

E, is for St. Elmo Steak House, the swanky eatery on S. Illinois Street is the place to see, be seen and drop a lot of coin on a boffo meal in downtown Indy. Make sure you get a shrimp cocktail. The shrimp are as big as a baby?s arm.

F, is for Ferocious. That describes Ohio State linebacker Ryan Shazier, the lynchpin of a sometimes-leaky Buckeye defense. He paced the Big Ten in tackles, averaging 10.2 with 122 stops. Guy is all over the field

G, is for Gadget, as in ?gadget? play. Michigan State coach Mark Dantonio is a master at them. Ask Notre Dame. Will we see one on Saturday night? Hmmmm.

H, is for Hyde. Carlos Hyde was voted the Big Ten Running Back of the Year. He earned it, literally and figuratively carrying Ohio State to victory a few times. Who can forget his second-half effort in the win at Northwestern? Hyde is a beast, leading the Big Ten with a per-game rushing average of 143.3 yards with 165 carries for 1,290 yards.

I, is for Island. Michigan State likes to put its cornerbacks on an island in man-to-man coverage. That allows the Spartans to slide as many as nine men into the box in an effort to thwart the run. But the scheme also leaves MSU susceptibility to big pass plays.

J, is for Jeremy Langford. Michigan State had a yawning need at running back when Le?Veon Bell turned pro early. Langford has answered the call, rushing 245 times for 1,210 yards, eclipsing the 100-yard barrier in each of the last seven games with a Big Ten-high 16 rushing scores.

L, is the Lucas Oil Stadium, the glistening home of the Big Ten title game for the third season in a row. It?s the ?House That Payton Manning Built That Andrew Luck Is Living In.?

M, is for Miller. Braxton Miller, to be exact. He?s the Big Ten Offensive Player of the Year for a second season in a row. He?s also arguably the most deadly weapon in college football who has a legit shot at winning the Heisman despite missing almost three games.

N, is for Narduzzi, as in Pat Narduzzi, the Michigan State defensive coordinator who is one of the hottest assistants in the nation. He?ll be a head coach soon. For now, just enjoy watching his defense that ranks No. 1 overall in the Big Ten (237.7 ypg); No. 1 vs. the run (64.8 ypg); No. 1 in scoring defense (11.8 ppg).

O, is for Ohio. Script Ohio, specifically. It?s a fabulous tradition born in 1936 that is punctuated by the oh-so-famous dotting of the ?i? by a sousaphone player.

P, is for Perles. Big George Perles is the last Michigan State coach to lead the Spartans to the Rose Bowl, doing so after the 1987 season with players like linebacker Percy Snow, offensive tackle Tony Mandarich, wideout Andre Rison and running back Lorenzo White. Not bad. MSU went 9-2-1 overall and 7-0-1 in the Big Ten that year, beating USC in Pasadena.

R, is for Rose Bowl. That could be Michigan State?s destiny even if it loses to Ohio State. Kinda strange, huh?

S, is for Shilique Calhoun. He made Michigan State fans forget about William Gholston-quickly-en route to earning Big Ten Defensive Lineman of the Year accolades. He has seven sacks and 13. 5 tackles for loss.

T, is for Twenty-four wins in a row for Ohio State. That?s the longest winning streak in the nation. It?s an amazing run that dates to a loss at Michigan under Luke Fickell to end the 2011 season.

U, is for Urban Meyer, whose is aiming to win a third national championship and second with another school. The only coach who has won national crowns in the BCS era with two schools is Nick Saban. In other words, Meyer is on the path to all-time greatness.

V, is for Victory, of which Michigan State has 11 in 2013. That marks the third time in the last four seasons Mark Dantonio has engineered an 11-win season in East Lansing. The 2013 Big Ten Coach of the Year can take a bow, but he won?t.

W, is for Win, which is what Ohio State got over Michigan State the last time they played on Sept. 29, 2012. The game was in East Lansing and was Urban Meyer?s first Big Ten contest. OSU won, 17-16. Braxton Miller led the way, notching 315 total yards as the Buckeyes upset No. 18 Michigan State. Miller ran for 136 yards on 23 carries and passed for 179 yards while completing 16 of 23 attempts.

X, is for X-factor. It?s special teams, in which MSU has an edge. The Spartans have two weapons in punter Mike Sadler and kicker Michael Geiger. Sadler averages 42.4 yards per boot and is adept at placement with 29 punts inside the 20-yard line. Geiger led the Big Ten in field-goal percentage (12-of-13). And he has a big leg, drilling all six of his attempts between 40-49 yards with a long of 49.

Y, is for Young stud. That?s what Ohio State offensive coordinator Tom Herman is. He?s only 38 years old but is on the fast-track to coaching stardom. His Buckeye offense is the best in the Big Ten in scoring (48.2 ppg); total offense (530.5 ypg); rushing offense (321.2 ypg); pass-efficiency offense (164.0).