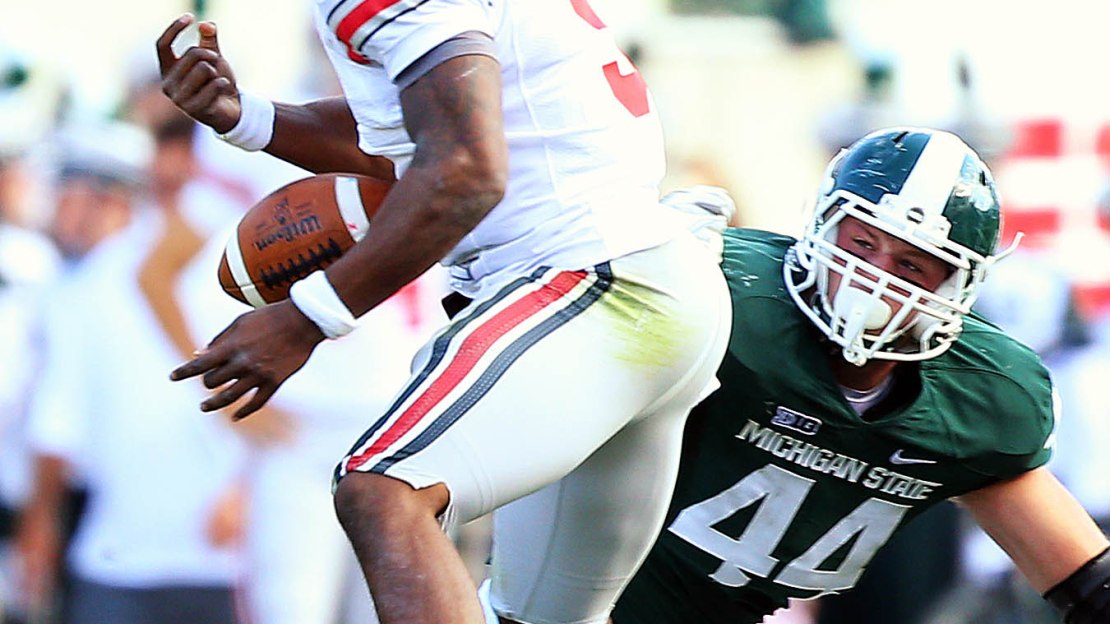 Way back on August 1, I did a Q&A with Iowa legend and BTN analyst Chuck Long, asking for his views on the 2013 season. In one of my questions, I asked Long who he was picking to win the Legends Division. His selection was a bit of a surprise: Michigan State.

Four months later, Long looks like a genius. Now, only 60 minutes separates Michigan State from the Big Ten championship and the conference's automatic bid to the Rose Bowl. The Spartans, by the way, haven't been to the Rose Bowl since the 1987 season.

But Ohio State will have something to say about that when the teams meet on Saturday night in Indianapolis. I caught up with Long to get his thoughts on the big game.

Q: What did you see in the preseason that made you like Michigan State so much?
A: They had a great defense last year and lost some really close games. They were going to have a lot of that defense back. And I knew they would have more fire and a purpose. With that defense, I knew they always were going to be in games. All it took was to settle down the quarterback spot and have some type of consistency on offense. They didn?t have to light it up on offense like Ohio State. They just needed some consistency and growth. That?s what they did as the season progressed.

Q: What does Michigan State have to do to beat Ohio State?
A: They have to run the ball. And I think they can do it. You see what Michigan did to Ohio State. OSU has a good and growing defense, but I don?t see them as a top defense yet. And Cook has to be accurate with his throws. They have been a slow-starting team, so they need to start off better. Early in games, Cook will overthrow guys and miss some wide open receivers. That?s a kid who is nervous at the beginning of games. He needs to settle down early. The butterflies will be going, but he has to hit some of those early throws.

On defense, they do what they do. The key matchup will be against Braxton Miller and Carlos Hyde. Ohio State has been living on big plays in the passing game. If you study Braxton Miller, he?s completing about 70 percent of his passes. And he?s not dinking and dunking. He?s throwing it down field. The defensive key for Michigan State will be to limit those big plays. If there is anything that has hurt Michigan State on defense, it?s big plays down the field. A lot of that is because of their man coverage. Teams are shooting the ball into the air and are coming down with a few of them.

Q: What does Ohio State have to do to win this game?
A: They have been a bit inconsistent on defense. The key on defense will be to stop Jeremy Langford and the run game and make Connor Cook throw the ball. If Ohio State can do that, it will play right into their hands.

On offense, the Buckeyes need to move the pocket some against Michigan State?s defense. If they can do that and get Miller on the edge, it will help. MSU plays man coverage, which makes it vulnerable to option teams. And Miller and Co., can run the option. If they get on the edges, the Buckeye offense can have some success. But they have to get Miller out of the pocket; he can?t be a pure pocket passer in this game.

Q: Does either team have an edge from a coaching standpoint?
A: I don?t see either coach having an edge. It?s even. But I think Urban Meyer or Mark Dantonio will have to have some kind of fake, a gadget or a go-for-it-on-fourth-down situation early in the game or at a crucial time in the game. That could be the difference in the game. It will be interesting to see how it plays out in a big game like this. It could be a blocked punt. Who knows?

Q: Is there more pressure on Ohio State?
A: Yes. With the BCS spot on the line. And also to keep the undefeated streak alive.

Q: How important is it for the Big Ten to get a team into the BCS title game?
A: I think it?s huge. To have a team in the national championship game is big for any conference. The Big Ten hasn?t had it in a while.

Q: Any other keys to the game you?ll be looking for?
A: Field position usually is key in a game like this. And the turnover battle also is always big. I want to see how the special teams work. Sometimes a good punt can flip the field for you and could be a difference in this game. You never know. Who will throw the fake in there? The reverse pass on offense? Those things don?t just flip the field, but they are game-changers. And can Ohio State drive the field on this Michigan State defense?

Q: How do you see MSU defensive coordinator Pat Narduzzi dealing with Braxton Miller?
A: The MSU corners are locked down. Narduzzi plays with a nine-man box with the safeties down with the corners in man. The weakness of that defense is the corners are turning and running with wideouts. So, your run support on the outside is a little weaker. It will be interesting to see what Narduzzi calls against Braxton Miller. With those corners locked in man coverage and running away, now your edges aren?t as secure to stop a guy like Braxton Miller. I wanna see if Pat Narduzzi plays a little bit more zone with his corners on the outside so they can face the football. It?s not their system. They don?t do that. It would be a departure from what they do, but they have Braxton Miller to deal with. It will be interesting. That?s gonna be a key thing I look for.

Q: Any weaknesses in the OSU offense?
A: I just think it?s a solid bunch. Besides Miller and Hyde, their receivers are solid. I don?t see a real big difference-maker. They spread the ball around. They are solid. It?s Miller and Hyde. This is gonna be a great game. I can?t wait.