Monday links: How big was Iowa's win at Nebraska? 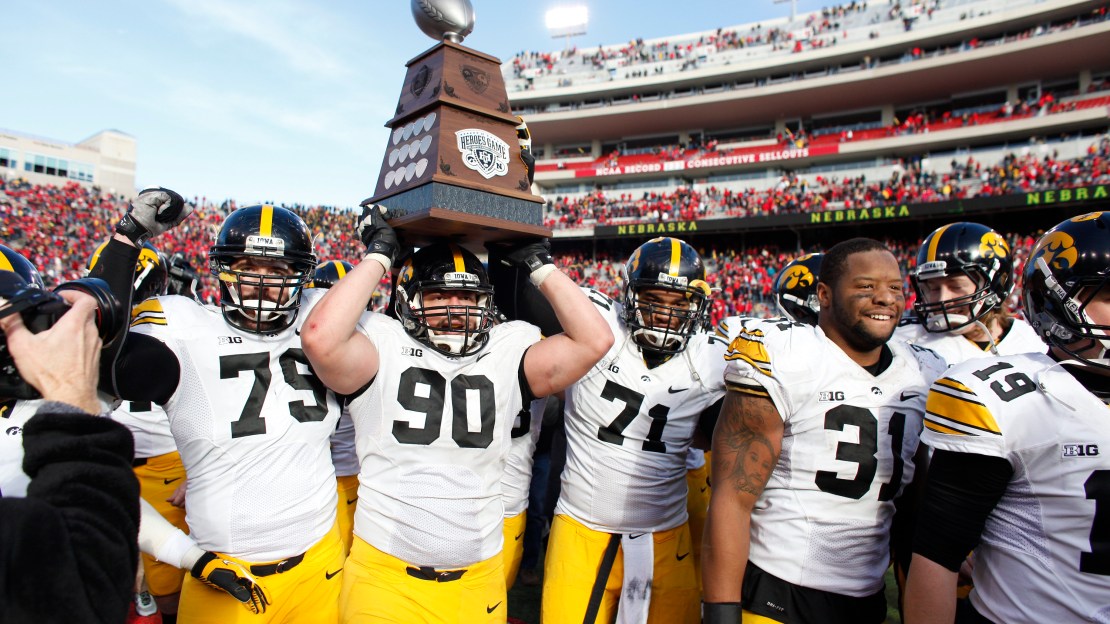 Big Ten championship game week is here! So, let?s kick off Monday?s link with a quick look back at that wild Ohio State-Michigan game. There was a lot to like for Ohio State in its 42-41 win at Michigan. But, alas, that ugly pass defense reared its head again. OSU allowed 451 yards passing and 603 overall.

?We're pretty disappointed," said linebacker Ryan Shazier. "We're a lot better than that. We had a bad game today. We had too much emotion at the beginning and they got in front of us. They started off early and we just had to start calming down. We just have to do better."

Yes, Michigan won just seven games in a disappointing season. But it showed a lot of life for the future in its valiant battle with Ohio State.

?I?ll be very excited to see the next game,? said Hoke, whose team will play in a bowl. ?Let?s see if we play with that same passion they had today, that energy.?

Big win for Iowa on Friday at Nebraska. Heck, let?s be honest: It was a huge win. In fact, Pat Harty of HawkCentral.com thinks it may have been a program-turner for the Hawkeyes. No doubt, as Iowa flipped its record from 2012, going from 4-8 to 8-4.

Harty says whether Iowa had turned the corner has been an ongoing debate ever since the Hawkeyes rebounded from a 30-27 loss to still undefeated Northern Illinois in the season opener to win four games in a row, highlighted by a 23-7 victory over what now is an 8-4 Minnesota team on Sept. 28. But there is no denying this: With a chance to win nine games and perhaps add to its January bowl legacy, the Iowa football program is now relevant again. What a turnaround by Kirk Ferentz and Co.

The great Mike Griffith of Mlive.com thinks this Michigan State defense is good. But it can?t be considered great without sealing a trip to the Rose Bowl.

I see where Griffith is coming from. But I still think this defense will go down as maybe the best in school annals no matter the postseason destination for the Spartans.

Tom Shatel of Omaha.com has taken a look at the statement released by Nebraska A.D. Shawn Eichorst that announced Bo Pelini would be back as coach in 2014. He says the statement raises questions but is worth taking at face value.

Shatel would like to see Eichorst and Pelini appear together at a postseason presser. I think a lot of people would like that. Shatel thinks Eichorst may have seen a fire about to blaze out of control, and so he stepped in to put it out and restore calm. In that sense, he was right on time. State your support and tell everyone to move on, nothing to see here. I just wonder why it took the Huskers A.D. so long to offer public support. Whatever.

Wisconsin really had not had a clunker game all season. Well, the home loss to Penn State certainly qualifies as a clunker. And it was a costly clunker that likely killed the Badgers at-large BCS bowl hopes. In this video, Joel Stave and other Badgers talk about the breakdowns.

How about Christen Hackenberg? The kid quarterback tossed four touchdowns in an upset win at Wisconsin. He talks about it in this video. ?Hack? keeps getting better and better. How good will he be next season?

The great David Jones of Pennlive.com says Hackenberg gets an ?A? on the final exam for his first semester. Is there a better true freshman quarterback in America?

Jones asked Hackenberg to describe his progress on a month-by-month basis.

?September, I started picking things up. So, ?progressing.?

?November, ?understanding.? Things started clicking for me the last month here. Understanding the entirety of the offense - run game, pass game, coverages. I just gotta continue to get better at that.?

I can read and re-read Hageman?s life story. It?s that amazing. I?ll be rooting for him in the NFL. Oh, and his interception against Northwestern helped change the course of what appeared to be a lost season. Minnesota?s play of the year?

The key to Minnesota?s success this season? It has been Hageman?s defense, says Marcus Fuller of the St. Paul Pioneer Press. No doubt. The offense? It was one-dimensional and lacked explosion.

"Just the fact that we've been able to have this record and play aggressive against ranked teams, I feel like we definitely took a step forward," Ra'Shede Hageman said. "The sky's the limit for the way we're playing. The seniors had a chip on our shoulder from past years. I feel like we definitely carried the team on and kind of set the tempo for, obviously, the future."

North Dakota State got a vote in the AP poll. Nebraska did not.

So a game being played on the 29th of Dec is better than playing on New Years day?

My take: It doesn?t matter. The ?New Year?s Day bowl? mystique ended years ago with the flood of bowls.

A Texas-Michigan Buffalo Wild Wings Bowl might draw higher TV ratings than any non-Jan. 1 bowl game since … Ever?

#Gophers being a "great story" with a turnaround season and regrouping after Kill's medical leave helps sell MN program to bowls, Kill said.

Mighty SEC's title game has West winner Auburn, which went 0-8 in league last year, and East's Missouri, which was in Big 12 two years ago.

My take: Now you KNOW it?s a big game.

Agree w/ Kirk H's take: If Auburn couldn't get enough of a boost after beating Bama to get past OSU doubt Tigers will get it after Mizzou.