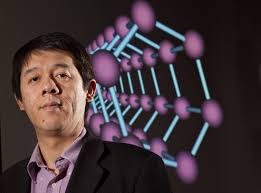 For 20 years, Xiao Cheng Zeng has been leading innovative research at Nebraska. Earlier this month, he was recognized by the one of the oldest scientific societies in the world.

Zeng, the Ameritas University and Willa Cather Professor of Chemistry at the University of Nebraska, was named one of 12 new Fellows into the Royal Society of Chemistry (RSC) earlier in November.

?The designation is a huge honor,? said David Berkowitz, a Willa Cather Professor and the Chair of the Department of Chemistry at the University of Nebraska. ?It brings honor to what [Zeng] has been doing for the last 20 years, and shines a brighter spotlight on the fundamental research going on in chemistry at Nebraska.?

The RSC is the largest organization in Europe for advancing the chemical sciences. With a worldwide membership network and publishing business, the RSC promotes science through educational conferences and political activity.

Since arriving on campus at Nebraska, Professor Zeng has supervised 20 graduate students and 20 postdoctoral fellows, and has published nearly 300 scientific papers in various journals. Berkowitz noted that Zeng is the department?s most published professor.

?He?s a theoretician,? Berkowitz said. ?Zeng has predicted structures that people didn?t know could exist, and couldn?t imagine could exist, that are pretty profound through computational chemistry.?

In 2012, Zeng was named an associate editor of Nanoscale, a journal focusing on nanoscience and nanotechnology that is published by the RSC.

Zeng has been recognized for his research with a number of other prestigious awards, including the University of Nebraska Outstanding Research and Creative Activity (ORCA) Award in 2010. Here is a video produced by the university when he was honored.

To learn more about the Royal Society of Chemistry, go to: http://www.rsc.org/