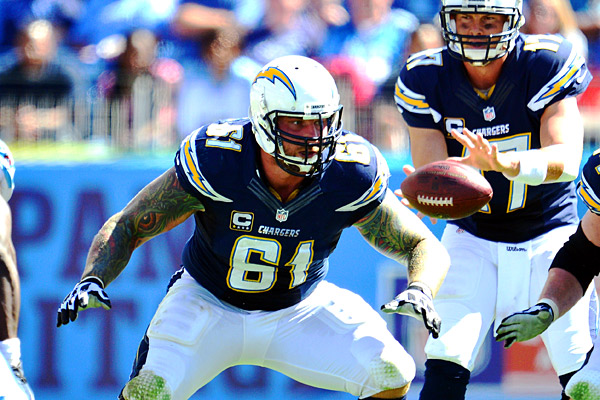 At the start of the 2013 NFL season, Dollar Shave Club announced a season-long initiative to promote its new male hygiene product, ?One Wipe Charlies,? that broke from the football-advertising norm of featuring popular quarterbacks, running backs and wide receivers in ads. The goal of the campaign is to raise awareness about good hygiene for men. During designated games, Dollar Shave Club is donating $10 for every clean snap made by one of its spokesmen and $1 for every tweet during that game with the hashtag #cleansnap, totaling up to $4,000 for the charity of each player?s choosing.

For Hardwick, the campaign is right up his alley.

After four years in West Lafayette, Hardwick was selected in the third round of the 2004 NFL Draft by the Chargers. He has spent the last 10 years as the heart of the offensive line in San Diego, and has become intimately involved with the Marine Corps-Law Enforcement Foundation (MCLEF).

Early in his NFL career, another former Big Ten lineman, Indiana-grad Kris Dielman, introduced Hardwick to MCLEF. Since then, Hardwick has invested significant time and money assisting children and spouses of fallen Marines and federal law enforcement officers in the San Diego community.

To support MCLEF, as well as the Big Brothers and Big Sisters of San Diego County, the Chargers started a program to get its fans involved.

Touchdowns 4 Kids is an opportunity for Chargers fans to pledge money for every touchdown scored by the team. Hardwick, Dielman (who is now retired) and other members of the Chargers? offensive line have pledged to donate $100 per touchdown for the entire season, and the Chargers organization has also committed to donating $2,500 on Hardwick?s behalf, at the end of the season.

This year, Hardwick?s involvement with Dollar Shave Club will add more funds to the MCLEF cause.

For more information about Touchdowns 4 Kids, go to: http://touchdowns4kids.com/

For more information about the Marine Corps-Law Enforcement Foundation, go to: http://www.mc-lef.org/