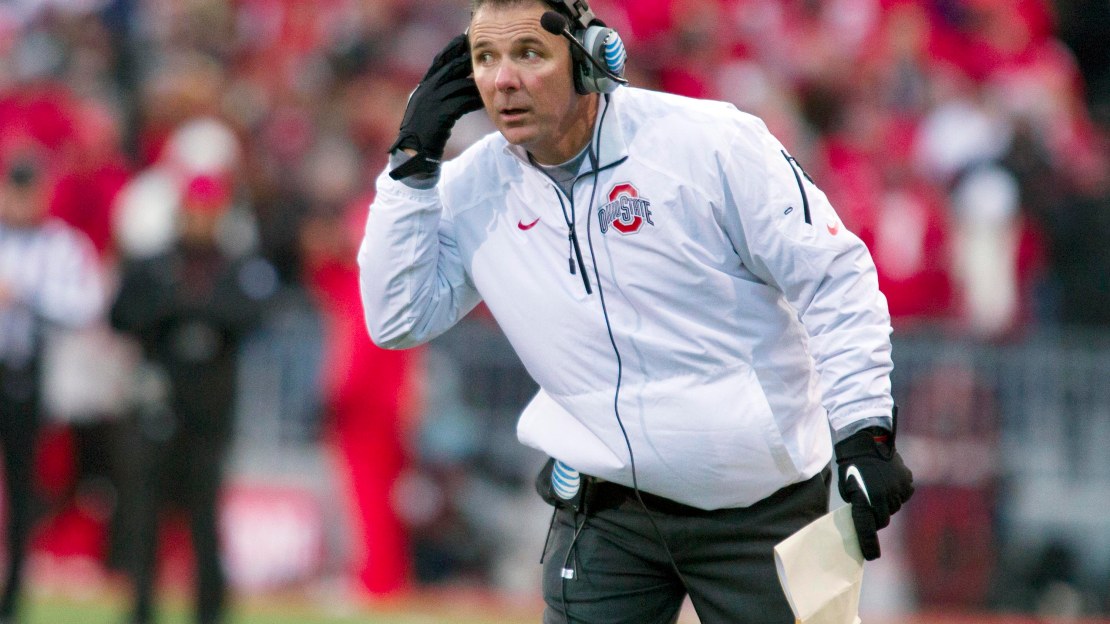 (AP) Ohio State coach Urban Meyer made a major blunder on Monday. No, he didn't make a brash prediction or mock an opponent. In the eyes of many, however, this might have been worse.

He said the word "Michigan."

Around these parts, Buckeyes coaches, fans and players refer to their biggest rival as "That Team Up North" or maybe "That School Up North," but almost never by the university's actual name.

"Did I really?" Meyer said, looking stricken, after being told of his faux pas. "Wow. I apologize."

That might sound petty to people not acquainted with the bitter rivalry known as "The Game," but the pettiness works both ways. Michigan coach Brady Hoke calls the final opponent on his schedule "Ohio" – something that drives Buckeyes' fans crazy.

"We are excited (about playing) Ohio," Hoke said Monday. "It's such a great rivalry that we're fortunate to be able to play in and coach in. This is a week that gets everybody involved. Everybody has an opinion, which is good for The Game because it's talked about."

Beyond Meyer's little slip-up, just about everything followed form as the Buckeyes spoke publicly for the final time before going deep into their practice facility/war room to scheme and dream for Saturday's big game at The Big House in Ann Arbor, Mich.

The third-ranked Buckeyes (11-0, 7-0 Big Ten) are favored by 12 1/2 points, largely because they're riding a school-record 23-game winning streak. In addition, that sizable favorite's role is also because the Wolverines (7-4, 3-4) have struggled lately, losing four of their last six games.

Jack Mewhort, one of Ohio State's captains and a starter on the offensive line, grew up in Toledo, almost in the middle both geographically and in terms of partisanship, between the two rivals.

He disregarded Michigan's recent hard times heading into the 110th playing of The Game.

"That makes no difference because of the tradition and history that go into this rivalry," he said. "It's always a tough, smash-mouth game. We're prepared to get their best shot, and they're going to get ours, too. The records aren't really a big deal this week."

One thing that might be a factor is that The Game doesn't stand alone at the end of the regular season for the Buckeyes this year. For the first time ever, they'll be playing in the Big Ten championship game a week later against No. 11 Michigan State.

Meyer, the coach at Florida 2005-2010, has encountered a similar situation three times before. In 2006, '08 and '09, his Gators squared off with rival Florida State in their last regularly scheduled game and then had to play in the Southeastern Conference title game a week later. They beat the Seminoles in all three, winning two SEC championship games.

"I don't want to say it's awful, but you talk about blowing out your staff and players," he said. "Our focus is on this one, but we know what's coming. You have to be so disciplined in the way you practice, and I'm going to warn our coaches and myself about sleep and taking care of yourself, because these next two weeks are going to be brutal."

The players don't sound as if they'll have the slightest problem concentrating on a team that many native Ohioans are born and bred to despise.

"There is a dislike for that team up north," defensive lineman Michael Bennett, who hails from suburban Dayton, Ohio. "I think every guy gets a little bit of motivation from that and coach Meyer gets extra motivation from that. It filters down to us."

The Buckeyes have been on a roll: the lengthy winning streak, taking a division title, locking up a berth in the conference title game and remaining in the thick of the national championship picture at No. 3 in the BCS rankings.

But all of that doesn't mean a whole lot if they can't win the game that's most important to their fans.

"This is the whole season, really," safety C.J. Barnett said. "Everything is out the window, records, everything we've done, haven't done – it's all about this week."