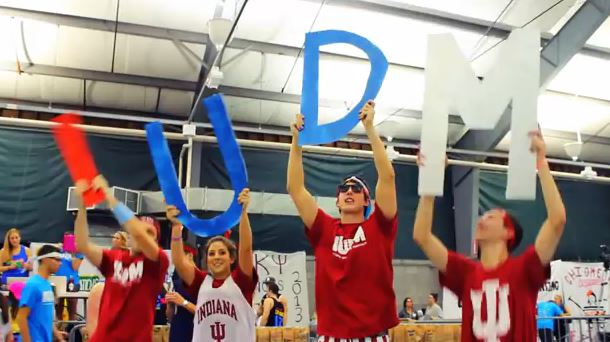 A mere 36 hours after Survivor?s ?Eye of the Tiger? appropriately opened the 2013 Indiana University Dance Marathon (IUDM), the 23rd annual fundraiser concluded with a record-breaking celebration.

From 8 p.m. on Friday, Nov. 17, to 8 p.m. on Sunday, Nov. 19, more than 3,000 students who had spent a year planning and fundraising danced. And danced. And danced some more. The exhausting efforts - in the months prior to the event and on the dance floor - raised an impressive $2,622,123.21 to benefit Riley Hospital for Children in Indianapolis.

Students devote countless hours to raising funds and making the event a success. Greer Homstad is on the entertainment committee.

?The committees meet for a couple hours every week for nine months planning the marathon,? said Homstad. ?I was fundraising while I was abroad in Italy. You never stop thinking about it.?

Social media played a huge role in this year?s IUDM. Not only did student fundraisers use their social networks to spread the word and raise money, but the Facebook page for the event displays a lengthy timetable of this year?s event. Featuring videos, photos and comments from those who danced and those who were on the receiving end of the event?s generosity, the page is a monument to the community that exists around IUDM.

The dancers are on the floor for either 18 or 36 hours, which can be physically taxing. During the marathon, families share their stories with the students to motivate them to continue dancing. According to Homstad, those stories make the event more special.

?There?s nothing that can prepare you for what you experience in those 36 hours,? said Homstad. ?It?s emotionally draining hearing the unimaginable things the families are going through. It might be a six-year-old kid telling you he?s had 30 surgeries in the past year, and he was on bed rest for the summer and couldn?t ride his bike or go outside and play because the doctors didn?t expect him to ever walk again. So while your feet and back hurt, it?s well worth it.?

For many graduates, the event is an important tie to the university. And for many seniors, the final marathon can be bittersweet.

?Most of us started participating as freshmen or sophomores,? said Homstad. ?As a senior, I?m already planning on coming back for the marathon next year. For recent grads who were involved, IUDM is like Homecoming.?

Since its inception, IUDM has raised more than $14 million for the Ryan White Infectious Disease Center at Riley Hospital. For more information about IUDM, go to: http://ironiudman.net/newsite/