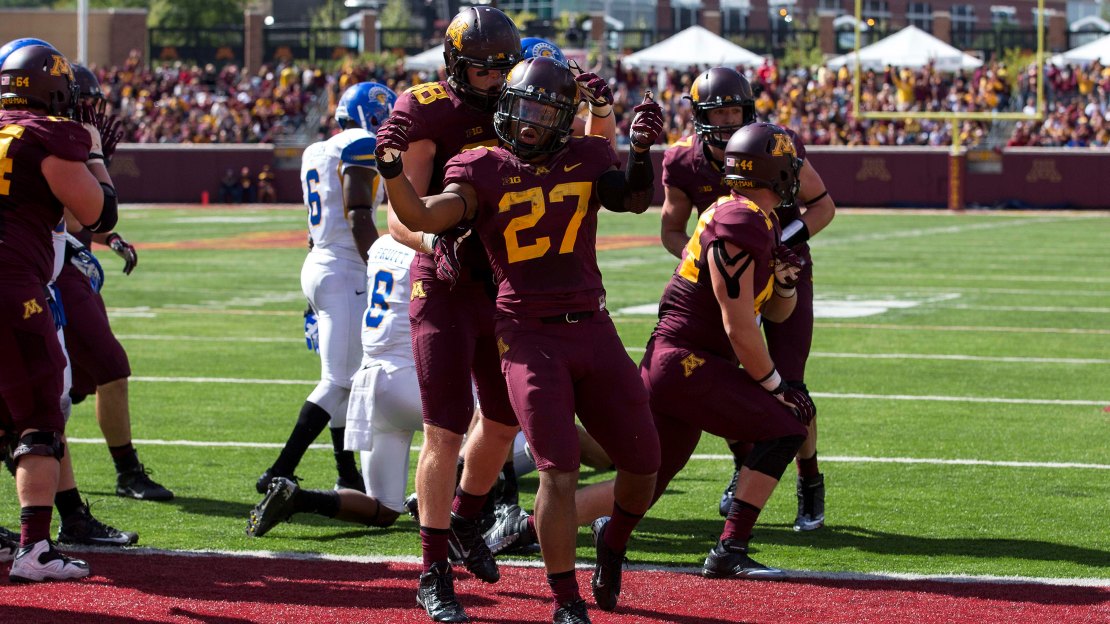 No player in the Big Ten has been more surprising this season than Minnesota running back David Cobb.

When the season began, he was a third-stringer behind Donnell Kirkwood and Rodrick Williams. But when Kirkwood injured an ankle in the season opener vs. UNLV, an opportunity developed. Williams and Cobb shared the load, but Cobb slowly took over and hasn?t looked back.  He?s now one of the top backs in the Big Ten for an 8-2 Minnesota team that?s the surprise of the league.

The Gophers are riding a four-game Big Ten winning skein, the school?s longest since 1973. And Minnesota has been doing it with acting head coach Tracy Claeys leading the team on game days with Jerry Kill working his way back as he tends to his health.

Cobb has been a big part of the success for a team picked by most to finish last in the Legends Division but remains in the hunt to win the title. He ran for over 100 yards in each of the last four games and five overall, enjoying a breakout 125-yard effort vs. San Jose State on Sept. 21 for an offense that is built around a physical ground game.

I caught up with the 5-11, 225-pound junior as he was prepping for a big visit from Wisconsin in the battle for Paul Bunyan?s Axe, which the Gophers haven?t won since 2003. It will be the biggest game in the brief history of TCF Bank Stadium.

Q: This has been a dream season, right?

A: It definitely has. The coaches have put a lot of trust in me and I have gotten an opportunity and have made the most of it. I just want to run with it and make the most of it.

Q: Any way you envisioned this back in August when you were down the depth chart as a third-stringer?

A: Everyone has their visions of what they want to be. I always thought in the back of my head that if I got my opportunity, I would make the most of it and I would be satisfied with just having the opportunity. I didn?t envision having as much success as I am now, but it?s a credit to my coaches for having confidence in me, as well as the o-line and my teammates.

A: I don?t really have a favorite play. But I like all of our zone schemes; you never know where they can hit. I guess if I had to pick a play, I?d have to say the screen pass where I get out in space. The DBs and linebackers are dropping, and when I get the ball I have about a 15-yard start. So, I really like the screen.

Q: What has been your favorite run this season?

A: I?d say it was my first career touchdown, which was this year at New Mexico State. It was about a 14-yard run. I broke a tackle and made a guy miss. That was my most memorable.

Q: Growing up in Texas, was there anyone you liked to emulate?

A: Growing up down there, everyone wants to be Adrian Peterson. But as a kid, I fell in love with Eddie George. He?s the reason why I wear No. 27. I also like Arian Foster, and Texas had a couple of good backs like Ricky Williams. I was a UT fan growing up. So I try to take a bit from each of their games.

A: I had a few offers and some other schools wanted me to play other positions. But I really wanted to play running back. I had interest in Stanford, but I took a visit to Minnesota and they brought me in. I liked how they treated my family and I liked the environment. Coach Kill and others showed me around and said they?d take care of me and help me get my degree.

Q: What other backs in the Big Ten do you like to watch?

A: Ameer Abdullah has quickness in the hole. He sees the hole and makes two cuts and he?s going down the field before you know it. I like watching him. I like Tevin Coleman of Indiana. He kinda reminds me of Darren McFadden. The big power back from Iowa (Mark Weisman) is a load to bring down. Bill Belton from Penn State has some quickness. I like his game. He?s also a good pass catcher out of the backfield. And Ohio State?s Carlos Hyde. He?s a bigger back. He also can out run you. He has been playing well.

Q: What is your best attribute?

A: For me, it?s trusting the guys up front. It?s vision, seeing the linebackers and knowing the offense. A lot of guys have talent and speed, you need those things. But what separates guys is knowing what defenses are going to do and knowing your offense and blocking schemes. That?s what helps me out a lot.

Q: What would it mean to win the Axe? Minnesota has lost the last nine meetings.

A: First, it would be another win for us. Then, we?d get to bring home the Axe. That would be good. We haven?t beaten them in a while. If we can send them back to Wisconsin without the Axe, that would be great.