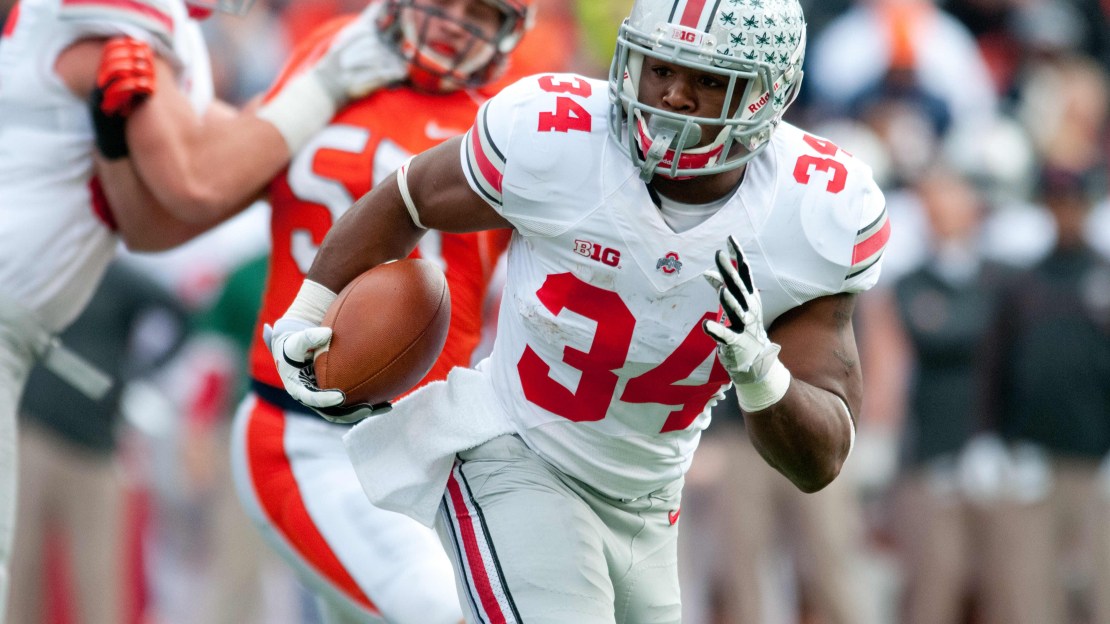 The penultimate week of the season is upon us, with some interesting storylines. Minnesota will try to win the Axe from Wisconsin for the first time since 2003, while Michigan State and Ohio State will look to win outright the Legends and Leaders Division, respectively. The Buckeyes also are aiming for win No. 23 in a row in its quest for the BCS title game. Here?s a look at all of the Week 13 matchups.

Why you should watch: Someone is going to win a Big Ten game! Both squads are 0-6 in conference play. For the Fighting Illini, the pain and suffering has dragged on since 2011, when the program last won a Big Ten game. It?s 20 conference losses in a row and counting. The Boilermakers have lost eight in a row in Darrell Hazell?s debut, which is going down as one of the worst seasons in school history-if not Big Ten history.

Player on the spot: Purdue DT Bruce Gaston. He and his defensive linemates have been a colossal disappointment. Time and again, they have gotten trucked despite the unit being purported preseason strength with veteran, mature talent. Gaston is gonna have to lead a charge to disrupt the timing of a good Illini offense that could rip apart Purdue?s tissue-paper defense.

Why you should watch: Two schools trying to climb over each other in the bowl pecking order. The Wolverines are trying to punctuate a disappointing season on an up-note, coming off an emotional triple-overtime victory at Northwestern that ended an ugly two-game slide. The Hawkeyes were off last week after getting bowl eligible the week before at Purdue. Iowa would like a signature victory. This would qualify, as would a season-ending win at Nebraska.

Player on the spot: Iowa QB Jake Rudock. The Iowa quarterback has been a revelation in his first season as a starter. He?ll need to hit some passes to loosen a Michigan defense that figures to be primed to stop the run. Rudock shouldn?t be fazed, as he has hit 59 percent of his passes with 14 touchdowns and nine picks.

Key matchup: Michigan offensive line vs. Iowa defensive line. The Wolverines have struggled much of the season up front, especially along the interior with a true freshman, redshirt freshman and former walk-on starting of late. The Wolverines will face a big, tough and physical Iowa d-line that is No. 5 in the Big Ten vs. the run (130.0 ypg). Michigan is No. 11 in rushing offense (135.7 ypg).

Key number: 684, receiving yards for Devin Funchess, the most ever in a season for a Michigan tight end.

Why you should watch: A win by the Spartans would clinch the Legends Division title and a second trip in three seasons to the Big Ten title game. MSU already has a share of the crown. For Northwestern, it?s looking for a win to stop the bleeding of a six-game losing skid that has derailed a once-promising season. Lose this game, and NU officially would be eliminated from bowl eligibility, not missing the postseason since 2007.

Player on the spot: Michigan State RB Jeremy Langford. The Michigan State back has literally and figuratively carried the Spartans during their push to the Legends crown. He has rushed for 100 yards in six games in a row, running for 721 yards in that span. He was at his best in the win at Nebraska last week, running for a career-high 151 yards with three touchdowns.

Key matchup: Northwestern offensive line vs. Michigan State defensive line. The struggles of the Wildcat attack are well documented. Last week, NU scored just one touchdown in four quarters and three overtime sessions. The blocking has been an issue most of the season. If the Wildcats can?t get a push vs. this physical Michigan State front, it?s going to be a long day in Evanston for the Cats. NU is 10th in the Big Ten in scoring (27.1 ppg); MSU is No. 1 in scoring defense (13.2 ppg).

Why you should watch: It?s the Battle for Paul Bunyan?s Axe! Minnesota also still technically is in the running to win the Legends Division. The Gophers need Northwestern beat Michigan State this Saturday-and then to win their last two games-including the finale at MSU. Hey, it could happen. Minnesota is hot, winners of four in a row and coming off a bye. The Badgers also are playing well, having won five in a row and trying to get positioned for a BCS at-large bowl spot. Minnesota hasn?t won the Axe since 2003.

Player on the spot: Minnesota RB David Cobb. He has emerged as one of the top Big Ten backs, rushing for over 100 yards in each of the last four games. He has 942 yards on the season, trying to be the school?s first 1,000-yard rusher since Amir Pinnix in 2006. If the Gophers can get him going vs. a rugged Wisconsin front seven, Minnesota could enjoy some success.

Key matchup: Minnesota front seven vs. Wisconsin running backs. The Gophers have played better than expected along the line and at linebacker, being active and aggressive. Is it great? No. But it?s solid. The unit will have to be on its A-game vs. a formidable Badger rushing attack that averages 307.9 ypg.

Why you should watch: The Cornhuskers? Big Ten title hopes are over after the loss last week to Michigan State on top of the defeat at Minnesota earlier this season. The Nittany Lions are ineligible for the postseason. So, what?s on the line? Tangibly, not much. But, don?t discount pride. Penn State would love to finish with two wins to compile another 8-4 mark under Bill O?Brien. The Cornhuskers are looking to improve their postseason pecking order.

Player on the spot: Nebraska QB Tommy Armstrong, Jr. The redshirt freshman has had his moments-good and bad. And, that?s to be expected. He has seven touchdown passes and seven picks and is coming off his worst effort of the season. Armstrong completed just 42 percent of his passes vs. Michigan State. Yes, Penn State?s defense has had issues, but the Nittany Lions typically have played well at home. Armstrong will need to pass well to open room for Ameer Abdullah, the Big Ten?s No. 1 rusher.

Key matchup: Penn State WR Allen Robinson vs. Nebraska secondary. Robinson basically has been a one-man gang, not getting much consistent help from other Nittany Lions receivers. If the Huskers can slow down Robinson, it would make the Penn State offense easier to defend and allow Nebraska to focus on slowing a strong Nittany Lions rushing game led by surging Zach Zwinak and Bill Belton.

Key number: 32, sacks for Nebraska, which ranks No. 1 in the Big Ten and No. 4 in the nation. Randy Gregory leads the league with 8.5 sacks.

Why you should watch: The Buckeyes can?t just win; they must dominate. Ohio State ?only? beat Illinois last week, 60-35. That coupled with another big win by Baylor saw the Buckeyes? grip on the No. 3 spot in the BCS standings slip to a razor-thin .001. Last year, Indiana pushed Ohio State to the limit before falling 52-49. A loss officially would end Indiana?s bowl hopes.

Player on the spot: Ohio State RB Carlos Hyde. Ohio State just needs to feed the big fella. This is an Indiana defense that?s bleeding points and yards, ranking last in the Big Ten in scoring (38.8 ppg) and last overall (534.8 ypg). The rushing defense? It?s awful, too, ranking 11th (251.1 ypg). Hyde has rushed for over 100 yards in each of the last five games, coming off a 246-yard, four-touchdown effort at Illinois. He?s a beast.

Key matchup: Indiana receivers vs. Ohio State secondary. Strength on strength. The Hoosiers have a fleet set of wideouts with the likes of Kofi Hughes, Shane Wynn and Cody Latimer. Throw in tight end Ted Bolser, and this is a nice collection of pass catchers. Led by cornerback Bradley Roby, the Buckeyes are loaded with athletic ability in the secondary. They can?t let IU rip off big plays in the passing game, as that?s the Hoosiers? only way to stay in this game.

Key number: 0, 1,000-yard rushing seasons by running backs under Urban Meyer. Carlos Hyde has a chance to end that vs. Indiana. He?ll enter the game with 947 rushing yards.