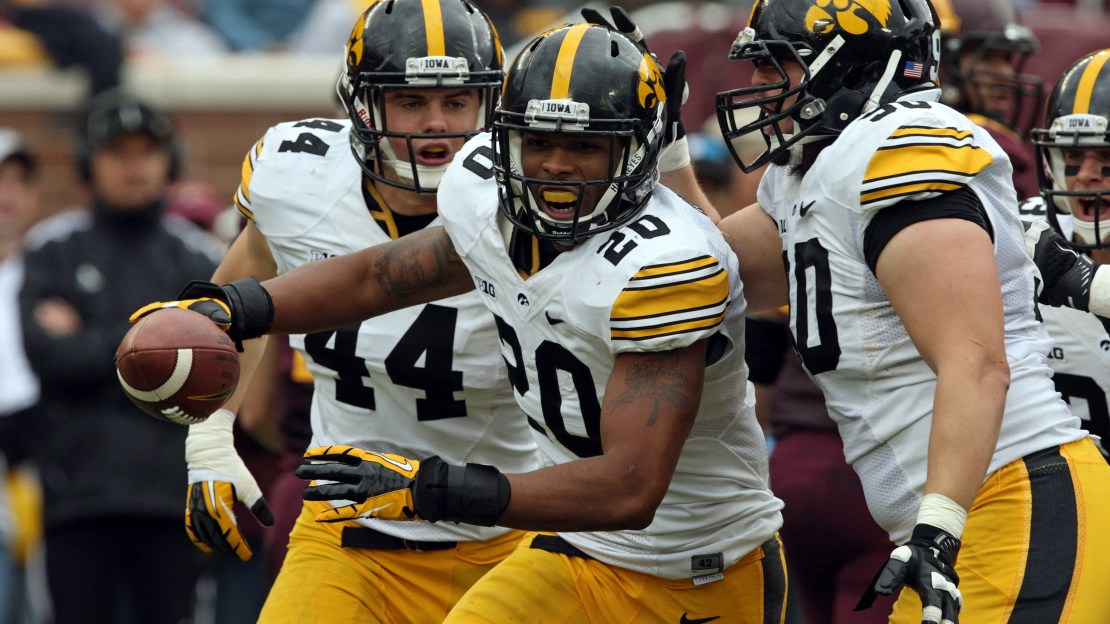 Let?s begin Wednesday?s links with a salute to an awesome triumvirate of Iowa linebackers. This Saturday vs. Michigan will be the final game in Kinnick Stadium for Hawkeye seniors James Morris, Christian Kirksey and Anthony Hitchens. What a trio it has been, says Rick Brown of HawkCentral.com. I agree. And you should, too.

But don?t keep a box of Kleenex handy for the Hawkeye linebackers. ?It?s not like we?re sitting around and holding hands,? Morris said of their Kinnick farewell. ?We?re really focused on what?s in front of us. There will be plenty of time to talk about glory days, all that good stuff.?

Iowa enters Saturday?s game ninth nationally in total defense. The three linebackers are the heart and soul of that improving defense. Hitchens has a team-best 87 tackles, while Morris has 81 and Kirksey 80. Hitchens and Morris both have 10 tackles for a loss this season. Morris also has a team-best five sacks.

Studs. All three of them. And, they?ll be missed.

Before we get to more football, did you see what Wisconsin junior Frank Kaminsky did last night? Forty-three points!!! That's a Wisconsin single-game record, and he did it by hitting 16 of his 19 shots, including all six 3-pointers. Impressive!

Tough break for Minnesota, as leading receiver Derek Engel suffered a knee injury in practice and could miss the Wisconsin game. Here is a video reaction from Jerry Kill and Gophers QB Mitch Leidner. Not good.

On a positive note, Joe Christensen of the Minneapolis Star-Tribune has five reasons for the Gophers? turnaround in 2013.

No. 1 on the list: The emergence of running back David Cobb. You won?t get an argument from me.

Mike Griffith of Mlive.com says Dantonio, it turns out, likes to dance to celebrate victories - and so do the assistant coaches and players. Hey, when you are 9-1, spinning on your head seems like a good idea.

"You know, the whole dance thing really started first game," Dantonio said at his Tuesday press conference, asked by MLive.com about a video that recently surfaced. "We just sort of kept it quiet. Somebody got it out of the bag after the Michigan game."

Wisconsin?s Gary Andersen never has coached in the Big Ten, but he knows the importance of the Wisconsin-Minnesota rivalry.

?Coach Alvarez walked me through the facilities and you see the ax sitting there in its trophy case," Andersen said earlier this week. "It doesn't take you long to look at it and see how important that is."

The Gophers lead the overall series, 58-56-8, but the Badgers took back the Axe in 2004 with a 38-14 victory at Camp Randall Stadium and have won the last nine meetings.

"Rivalries that have gone on for this long have so many stories behind them and so many moments behind them," said Andersen. "It's what I'm used to. It's what is great about college football in my opinion."

Oh, if you think you are watching Wisconsin when you watch Minnesota, don?t be alarmed. The two teams do operate in very similar fashions. Makes sense to me.

This is pretty cool. Penn State has a chance to produce two 1,000-yard rushers for the first time ever in Zach Zwinak and Bill Belton. Thanks, Bob Flounders!

Nice column from Rob Oller of the Columbus Dispatch, who says Ohio State fans should embrace, not fear, a shot at the BCS title game after the failures of 2007 and 2008.

Why put Buckeyes fans through those tortured national championship game losses again, Oller wonders? Because some fans - maybe 10 percent? - remain so traumatized by those back-to-back title-game losses to SEC teams that it hinders their ability to think rationally, even today.

Those fans know who they are. The thinking goes something like, ?It might be better to play a Pac-12 team in the Rose Bowl, where there is a better chance to win, than to chance getting embarrassed again by an SEC team - i.e. Alabama - in the BCS title game. Or to risk getting routed by Florida State.?

It?s about time to start rolling out the ?Big Ten is slow? stories. First up: Gil Brandt of NFL.com. Zzzzzz.

Brandt watched Ohio State beat up on Illinois. What got his attention was how a slow defensive Illini team was able to catch Carlos Hyde from behind on a 26-yard run at the end of the first quarter. Well, did Brandt notice the Illini defender had no angle on Hyde? Nope, that would have ruined the premise of Brandt?s story! So, just play along, reader, OK? This is a classic example of oversimplification.

Michigan has many issues. Chief among them: converting third downs.

Mark Snyder of the Detroit Free Press notes the recent numbers are staggering - against Michigan State, the Wolverines were 2-of-14 on third downs, against Nebraska 3-of-15, and 0 for the first 12 against Northwestern. Woof. Winning first down no doubt would help Michigan win third down.

But, hey, freshman running back Derrick Green is making strides.

This just in: Purdue coach Darrell Hazell calls the 1-9 season a ?work in progress.?

Hey, I can think of other things to call it, but let?s run with that, OK?

My take: It?s a very explosive attack that excels despite having a banged up o-line. Impressive.

From 2008-13, Michigan and Washington State are the only BCS-conference schools with more than Nebraska's 152 turnovers.

My take: This is impressive.

My take: And that led to zero touchdowns in regulation.

Dantonio on how dangerous Northwestern is: "They need 2 wins to go to a bowl game. They're in that kind of mode."

My take: Ya, well, NU also has lost six games in a row.

The question Bill O'Brien shot down about Allen Robinson was how NFL ready do you think he is? OB's response? "I'm not going down that road"

My take: I think that means O?Brien thinks Robinson is NFL-ready.