Did you see this? Frank Kaminsky & Wilt Chamberlain 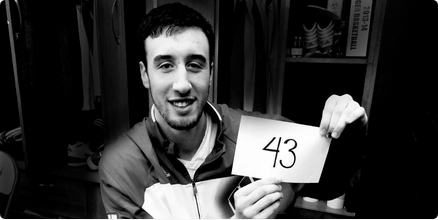 Wisconsin junior Frank Kaminsky has seen his popularity grow at a rapid pace after the Badgers' big man posted a school-record 43 points in a 103-85 victory over North Dakota Tuesday night at the Kohl Center.

His name was trending on twitter last night and into the early hours of Wednesday morning.

He was the lead on Sportscenter and well-known ESPN personality Steve Levy began referring to Kaminsky as "Special K."

But this tops it all.

Earlier today, Wisconsin men's basketball official twitter account (@BadgerMBB) released a photo of Kaminsky holding up a "43" sign in the locker room following the game. The picture was meant to resemble the famous image of former NBA great Wilt Chamberlain, holding up a "100" sign following his 100-point scoring output against the New York Knicks back on March 2, 1962.

In return, we decided to have a little fun and create a side-by-side image of Kaminsky and Chamberlain in honor of the Badgers' big man's memorable performance.