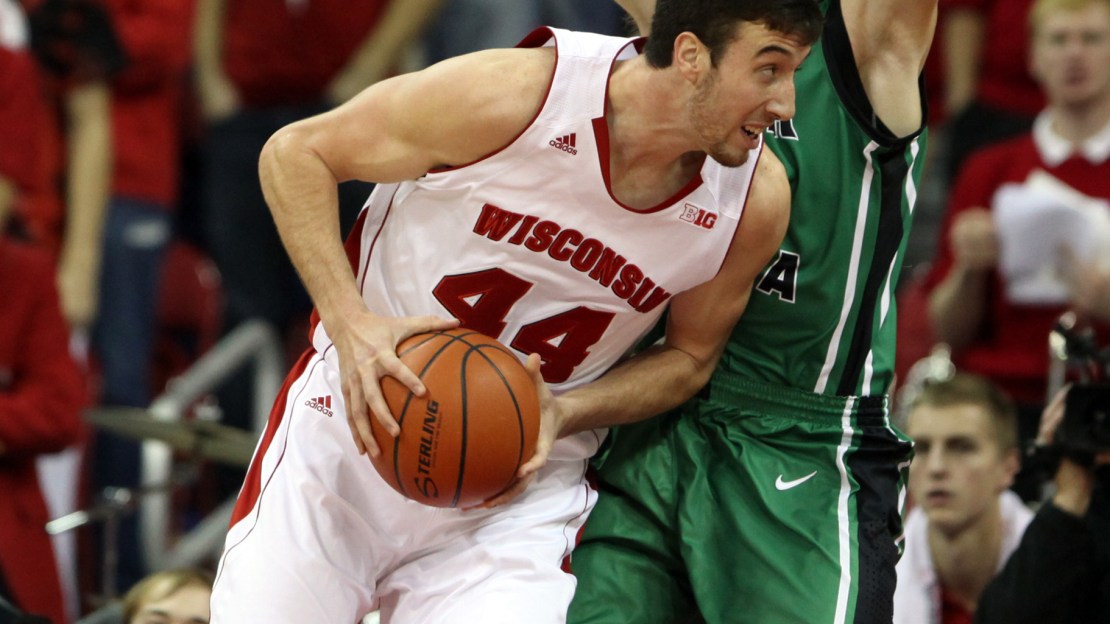 Frank Kaminsky clearly had a nice game last night, but where does the Wisconsin single-game record 43 points rank among the Big Ten's other top single-game performances of the past five seasons? See where the Big Ten Geeks rank Kaminsky's career night in this post.

Honorable Mention: Frank Kaminsky, 11/19/2013 vs. North Dakota
There are others that fit into this category. But this one happened last night, so I'll give it a bit more attention here.
Numbers: 43 points (19 shots), 6-6 from 3, in 28 minutes.
Geek Numbers: 191.0 Offensive Rating, 28.0% Usage
Why it Mattered: It doesn't, really. Wisconsin was going to win this game with or without Kaminsky's outburst. And despite this performance, Kaminsky is probably not going to be on the shortlist for the Naismith Award. But as far as offense goes, what Kaminsky did last night is something like a perfect game. This is similar to Kerry Wood's one-hit, no walk, 20 strikeout shutout performance. Wood isn't going to the Hall of Fame. And the game ultimately didn't matter much. But for three hours in May, Wood did something better than anyone else ever had. Rarely will you ever see someone just dominate an opponent like Kaminsky did last night. I'm jealous of all those who got to witness it in person.

5. Andre Hollins, 11/23/2012 vs. Memphis
Numbers: 41 points (16 shots), 5-5 from 3, 12-13 on FTs.
Geek Numbers: 150.0 Offensive Rating, 41.0% Usage
Why it Mattered: Last year was supposed to be a breakthrough season for Minnesota, and for a while, it was. After curb-stomping its first three opponents, the Gophers were tripped up by Duke, and staring down a strong Memphis team in the Atlantis Tournament. But despite Minnesota's strong start, Trevor Mbakwe was still not himself after missing a season with an injury. In fact, outside Hollins, the rest of the team shot 39 percent fron the field. No matter. Dre put the Gophers on his back and on the national scene. This was the first of 11-straight wins for Minnesota, which included wins over Michigan State and at Illinois. For a while there, the long-suffering Minnesota fans were on cloud nine.

4. Robbie Hummel, 1/12/2010 vs. Ohio State
Numbers: 35 points (17 shots), 10 rebounds, 0 turnovers. 8-13 from 3.
Geek Numbers: 169.0 Offensive Rating, 25.6% Usage
Why it Mattered: This would rank a lot higher if the Boilers won the game. It actually feels wrong to put this on the list, for that reason. I mean, if Hummel scores 3 points, the same exact thing happens-Purdue loses. But this was a special performance, in part because Evan Turner nearly matched it on the other end (32 points on 21 shots, 9 rebounds). This was the Big Ten's version of that Bird/Jordan commercial, with both players matching each other on every possession. The two teams ended up in a three-way tie for the conference crown, along with Michigan State. It was the last season that the Big Ten was "down," but through no fault of the teams at the top. Really, the problem was that Indiana and Iowa were still in disarray. But for that, the conference was just as good as it is today.

3. Jordan Taylor, 3/3/2011 vs. Indiana
Numbers: 39 points (19 shots), 7-8 from 3, 1 turnover.
Geek Numbers: 176.6 Offensive Rating, 36.0% Usage
Why it Mattered: On a team level, this was not a significant performance. Wisconsin was 13-4 in the Big Ten, and Ohio State had locked up the regular season Big Ten title. The Badgers still had a shot at tying Purdue for second place, but the Buckeyes rocked them by 28 in the next game to slam the door on that possibility. But for Jordan Taylor, this was the signature performance in one of the greatest individual seasons in college basketball history. We tend to be biased with all things Taylor, but we're not alone. The reason is that he was the anti-convention. To wit, much of his value derived from "invisible" plays in the form of not turning the ball over. Then there's the fact that his per-game numbers always underrated him due to Wisconsin's slow play (his 39-point masterpiece came in a 55-possession game). Throw in his nonchalant attitude on defense, which had the effecting of showing just how little on-ball perimeter defense matters in relation to the attention it garners, and, well, we're smitten. What's crazy is that another one of Taylor's games (February, 2011 vs. Michigan State) probably also deserves to be on this list.

2. E'Twuan Moore, 2/20/2011 vs. Ohio State
Numbers: 38 points (18 shots), 7-10 from 3, 4 rebounds, 5 assists, 2 steals.
Geek Numbers: 155.4 Offensive Rating, 30.9% Usage
Why it Mattered: Purdue was 10-3 (21-5 overall) entering this game, while Ohio State had just one loss on the entire season. Even on their home floor, Purdue was an underdog. Moore had a big first half, scoring 18 points, while freshman Jared Sullinger had 12 for Ohio State. With about six minutes left, Purdue clung to a 5-point lead, but that's when the E'Twuan Moore show started, as he scored 12 points down the stretch to seal the win. The win gave the Boilers a chance at a share of the title if Ohio State faltered down the stretch. But the Buckeyes didn't lose again until they met Kentucky in the NCAA Tournament.

1. Brandon Paul, 12/8/2012 vs. Gonzaga
Numbers: 35 points (16 shots), 5-9 from 3, 4 rebounds, 3 assists, 3 steals, 2 blocks.
Geek Numbers: 165.3 Offensive Rating, 33.3% Usage
Why it Mattered: Is this even the right game? After all, Paul dropped 43 on Ohio State a few months prior to this. When Illini fans talk about "The Brandon Paul Game," that's the game they're thinking of. So why this game, and not that one? Well, it's primarily because The Brandon Paul Game featured 7 turnovers (versus 2 against Gonzaga), which only exemplifies why Illini fans are correct that it's The Brandon Paul Game. And the game against Ohio State was in Champaign, while this occurred on the road. But also, the story is better. Against the Buckeyes, the Illini were an 8.5-point underdog that took down a top-5 team. There's an enduring image of Paul hitting the decisive shot (Watch it!) right in the face of the Nation's Best Perimeter Defender?, and the win propelled the Illini into the national rankings with a 15-3 record. But that was the last great thing to ever happen to Bruce Weber in Champaign, as the team limped through the rest of the season, finishing on a 2-12 note.

Last year, however, the Gonzaga win was just the beginning for a resurgent Illinois. After a rough patch in January, the team took down Indiana on its way to making the NCAA Tournament and being inches from the Sweet 16. Not to mention, Illinois was a heavy, 11.5-point underdog in that game.

Now, onto the oversights:

Burke's "problem," like Evan Turner's, is that his excellence was widely distributed. What he lacked in one-time tremendous efforts he more than made up by simply putting in a stellar performance, nearly every game.

Eighteen rebounds sounds great. But it was against Northwestern. Partial credit.

OK, let me have it. Tell me who I missed.