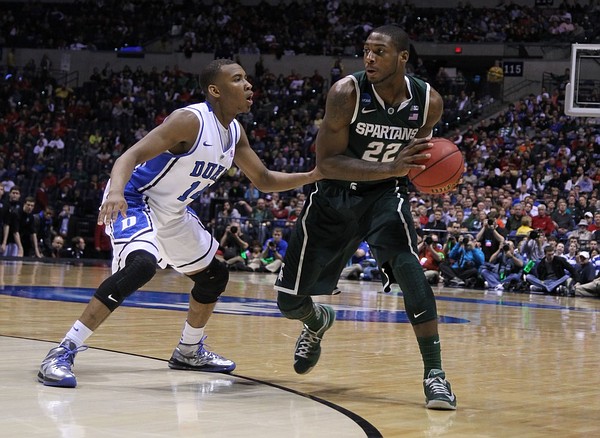 Michigan State received 51 of 70 first-place votes and now sits atop of the AP Top 25. Michigan State (3-0) hasn't been No. 1 since Jan. 1, 2001 – a few months after winning the most recent of its two NCAA titles – and took over No. 1 after holding on for a 78-74 win over then No. 1 Kentucky on Tuesday in Chicago. Michigan State plays visiting Portland tonight (game preview) at 7 p.m. on BTN/BTN2Go.

Michigan State was also voted No. 1 this week in the USA Today Coaches Top 25, winning 22 out of 32 first-place votes (full poll here).

In the AP poll, Kansas is at No. 2 after receiving seven first-place votes, the same number as No. 3 Louisville. Kentucky falls to No. 4 ahead of No. 5 Arizona.

"I think it's a privilege," Izzo told The AP on Monday, several hours before Michigan State hosted Portland. "If we handle it well, we'll see how long we can hang on. And if we don't, we'll learn something from that. We don't get a banner or a ring for this, but it's good for our program. It's also good for the guys on this team to add to their collection of accomplishments."

After playing the Pilots of West Coast Conference on Monday night, Michigan State will play Virginia Tech on Friday night in Brooklyn, N.Y. and then Oklahoma or Seton Hall the following night. The Spartans' next marquee game will be Dec. 4 at home against No. 24 North Carolina. Read the full AP story here.

The complete AP poll is below. Bookmark our AP and Coaches polls page for updates all season long.