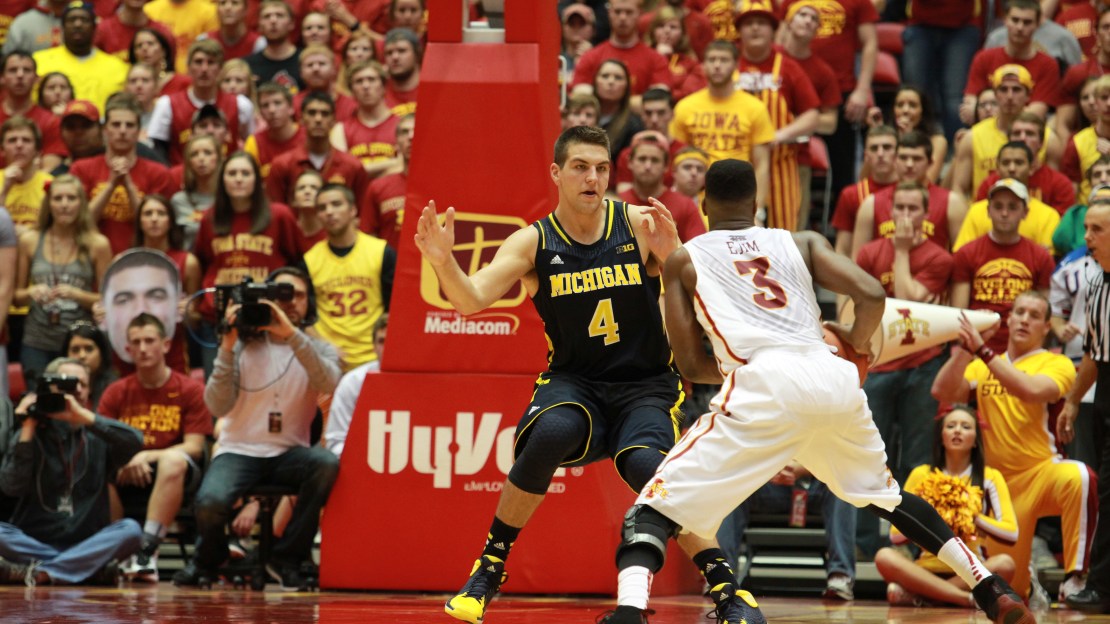 Most of the conference fed on cupcakes this weekend, but there were a few games of note. The best game of the weekend was Michigan's trip to Iowa State. Sadly, it did not go as the Wolverines would have liked, although Iowa State was actually favored in this game (which calls the subsequent court-storming into question, for those who dream of joining the Fun Police).

A full-strength Michigan played classic Beilein Ball, shooting a lot of threes while minimizing turnovers and shooting a high percentage on twos. And it mostly worked. The Wolverines turned it over on fewer than 16 percent of their possessions, and shot 53 percent inside the arc. Unfortunately, the team hit very few of its three-point attempts (27.6 percent), and made only 4 of its paltry 9 free throw attempts.

Nik Stauskas led the team with 20 points on 18 shots. He also dished 5 assists against only a single turnover. Last year, Trey Burke was the unquestioned leader of the offense, and everything played off of him. This year, that role hasn't been defined yet. But some out there believe Stauskas should be the centerpiece of the attack.

Michigan's offense should run through Stauskas, ala Neitzel for MSU in 2007. (Better supporting cast in this case.)

In any event, I'm not too concerned by the loss. Clearly, Mitch McGary was not quite up to speed yet (9 points on 7 shots, and 4 fouls in 22 minutes), and Iowa State is a good team that was playing on its home court. But it will be interesting to watch how Michigan's offense evolves this season.

Ohio State flexed its defensive muscles in holding Marquette to 35 points in a 65 possession game. The resulting 0.54 points per possession was the lowest figure posted by an Ohio State team since November 2008, when OSU held a hapless Samford team to 22 points. But that was against Samford. At home. This was Marquette, in a true road game. That probably pushes it to the finest defensive performance of the Thad Matta Era. What makes that all the more ridiculous is the fact that the Golden Eagles actually dominated the glass, grabbing 18 offensive rebounds (39 percent of their misses). That means that Ohio State was giving up second and third looks all game, but Marquette was still unable to convert at a rate that even approached respectability.

Of all the Buckeye games this year, this one might be the Buckeye-eyest. I say that because it presents extreme characteristics that I expect for this team-amazing defense, and mediocre offense. Ohio State's offensive attack was pretty awful as well in this game, as the team scored just 0.80 points per possession. But that really sounds more like a compliment than an insult. Over the past four seasons, OSU has had-at most-one game per season with this lousy of an attack. The team lost each of those (as you would expect when you have your worst offensive game of the season) by double digits. Here, they actually won. And by seventeen. Ohio State hosts American on Wednesday, which has the 323rd best offense in all of Division I, currently. Expect to be on #SINGLEDIGITWATCH for that game.

Sam Thompson was the lone bright spot for the Buckeye attack, scoring 13 points on 10 shots. He also grabbed 8 rebounds.

Wisconsin survived a road test at Wisconsin-Green Bay, prevailing 69-66. Both teams were held under a point per possession, largely because both teams avoided fouling and denied second chances. For the Badgers, that's a very good sign, as defensive rebounding is a question mark this season:

But right now, it's a concern, because even after Saturday's performance (UWGB recovered 27.5 percent of its misses), UW ranks 153rd in defensive rebounding percentage, nationally. That will improve, but it needs to improve a lot in order for this group to meet Ryan's typical standards. In particular, Sam Dekker needs to step up his game, as his defensive rebounding percentage remains unchanged from last season. As he's usually the second-tallest Badger on the floor at any time, that's unacceptable. Perhaps Ryan got in Dekker's ear before the game, as the sophomore pulled down 6 defensive boards in this matchup.

As for how close this game was, it's not all that concerning given that UWGB is projected to be one of the better (and likely, the best) teams in the Horizon League. Come March, this won't look like a blemish. Frank Kaminsky led the offensive attack with 16 points (12 shots) to go with 8 rebounds.

Purdue survived a home scare against Rider, but although a win is a win in RPI-land, I'm beginning to think that Purdue does not have the makings of an NCAA Tournament team. And frankly, there's no excuse for that. This team is plenty talented, as it returns almost everyone in the rotation from last season's squad that nearly played the Big Ten to .500. Also, last year's team featured a lot of freshmen that all came back. And at least one of those freshmen, Jay Simpson, appears to have had a tremendous redshirt season and is playing great basketball.

So what's the problem? Well, it's definitely not the offense as the team has scored well above 1.1 points per possession in every single game thus far this season. That leaves defense. And although some might be quick to blame the new hand-checking rules as the culprit (as was feared by some in the offseason), the reality is that Purdue hasn't been sending opponents to the free throw line with great frequency. Rider was a decided exception to that rule (31 attempts against 37 two-point shots), but on the whole that has not been a big problem. Instead, the issue has been defensive rebounding. Each of Purdue's three opponents garnered at least 35 percent of their misses.

The good news is that this problem is entirely fixable. While defensive rebounding wasn't a strength last year, it also wasn't much of a weakness. And really, it doesn't need to be any better than "not bad" for Purdue to get on track for a Tournament bid. And for all of D.J. Byrd's talents, rebounding was not one of them. So while I am concerned about Purdue's start, I'm not quite ready to hit the panic button yet.

Elsewhere, Northwestern lost to a mediocre Illinois State team, which lost its top six scorers off last year's team. The loss probably rivals last year's home defeat to Illinois-Chicago. But you probably have to go back to November 2004 to find a loss that was definitely worse than this one. What makes it worse is that the Illinois State fanbase actually seemed louder in Welsh-Ryan than Northwestern's.

If you're an NU student, please read the recap, because you were not here

We have a new defining photo of the Northwestern fan base: pic.twitter.com/PlBSI1HXzB

The Wildcat offense was terrible, scoring 0.93 points per possession, largely driven by an inability to finish at the rim. Northwestern made just 52 percent of such attempts, and the team could not overcome that inaccuracy with jumpshooting (25 percent on two-point jumpers). In particular, the team needs to get more out of Alex Olah. The seven-footer had at least 3 inches on everyone else on the court-he needs to do better than converting 1 of 4 shots. I'm also not the biggest fan of Sanjay Lumpkin seeing so many minutes as long as he insists on being a spectator on offense (In 86 minutes, he's attempted 8 field goals. A team of Sanjay Lumpkins would attempt fewer than 20 shots a game.), but then again he did grab 9 defensive rebounds.

Dissect the game all you want, but the takeaway should be that good teams do not lose games like this. Chris Collins is firmly in rebuild territory.

This week is mostly cupcakes until Thursday, when Nebraska opens play in the Charleston Classic by facing UMass, and Indiana faces off against Washington in the 2K Sports Classic in New York.