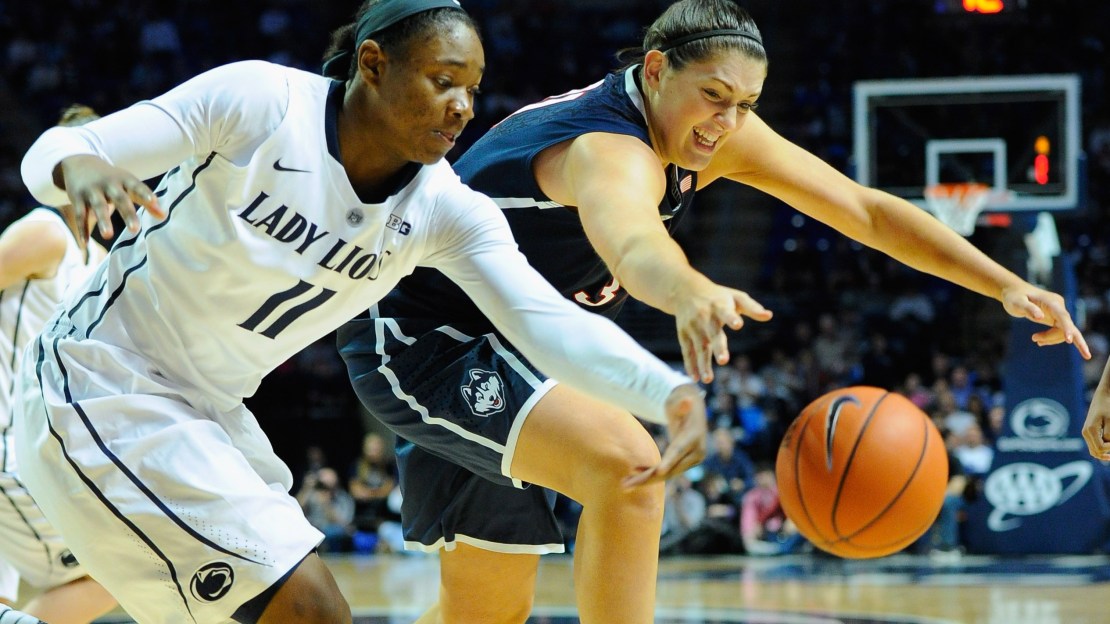 Big Ten women's hoops is in full swing today as eight teams are in action. No. 13 Penn State kicked off today's slate with a 71-52 home loss to No. 1 Connecticut. Illinois, Iowa, Michigan State, Northwestern, Ohio State, Purdue and Wisconsin also were in action. Catch up on all of today's B1G women's hoops action in this post.

(AP) Maggie Lucas scored 18 points and Tori Waldner had 11 for Penn State, but the Nittany Lions fell to No. 1 Connecticut  72-51 Sunday, snapping the Lady Lions 22 game home-court winning streak. The Huskies (4-0) knocked off their third Top 25 team of the week, beating No. 8 Maryland 72-55 on Friday night and No. 3 Stanford by 19 points on Monday.

Ameryst Alston scored a game-high 22 points for the Buckeyes (3-1), including six points in the final 6:45, but the Buckeyes fell to Georgia 53-49 on Sunday in a meeting of unbeaten NCAA Tournament regulars. Khaalidah Miller (12 points) hit three of Georgia's five 3-pointers, including one at 2:19 that extended the Bulldog's lead to 51-45. Ohio State's Raven Ferguson scored a putback after an offensive rebound and Alston made two free throws in the final minutes, but the Buckeyes could not get closer than four.

The Illinois (3-1) women's basketball team won their third straight game Sunday afternoon behind an offense that was one point shy of tying the single game scoring record set back in 1981. The Illini routed Alcorn State 112-28, breaking the record for widest margin of victory. Seven Illini finished in double figures, including senior Amber Moore who led the team with her fourth straight 20+ scoring game with 25 points.

Most times when basketball teams "start to click," it refers to scoring points on offense. University of Iowa senior Theairra Taylor says the Hawkeye women's basketball team is starting to click on defense, which was bad news for Stony Brook on Sunday. Iowa improved to 4-0 on the season by limiting the Sea Wolves to 18.6-percent shooting from the field and 6.7-percent from 3-point range during a 78-40 victory on Mediacom Court inside Carver-Hawkeye Arena.

(AP) Tori Jankoska and Aerial Powers each scored 24 points as No. 19 Michigan State outlasted No. 23 Dayton in overtime 96-89 on Sunday. The Spartans (2-1) trailed by two late in regulation, but Powers hit a layup with nine seconds remaining to send the game into overtime.

(AP) Courtney Moses scored 30 points to lift No. 18 Purdue to an 81-79 win over Toledo on Sunday. Moses was 13 of 18 from the field, with four 3-pointers, including the go-ahead jumper with 6:29 remaining in the second half that gave the Boilermakers (3-0) the lead it would hold to the buzzer. Houser added 17 points and eight assists to extend her double-digit scoring streak to 14 games.

Three pointers, points in the paint and rebounds, the Badgers did it all Sunday afternoon in a big 71-51 win over Northern Illinois at the Kohl Center. The win moves Wisconsin to 3-0, its best start since the 2009-10 season, while the Huskies fall to 1-2.

Northwestern battled with UNLV Sunday night at Welsh-Ryan Arena and after eight ties and 11 lead changes, the Wildcats emerged the 57-53 victors. Sophomore forward Lauren Douglas provided a spark off the bench for Northwestern with 11 points, including a key 3-pointer late in the game to tie things up at 53-53, and eight rebounds. Sophomore guard Maggie Lyon led the team with 12 points and chipped in five rebounds. Freshman forward Nia Coffey earned her second-consecutive double-double, posting 10 points and 10 rebounds in just 26 minutes.