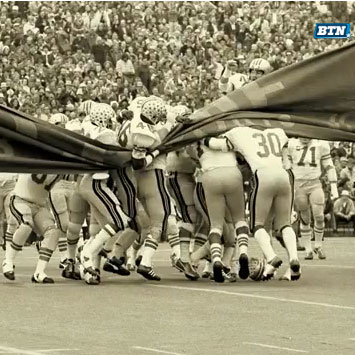 Randy Gradishar walks off the elevator wearing a snappy sport coat from the 1974 Rose Bowl and a necklace of buckeyes draped around his neck. The former Ohio State linebacking great seems pleased with himself. ?Check that out,? says former Michigan quarterback Dennis Franklin, eyeing Gradishar?s jacket. ?Did you get that for going to the Rose Bowl??

Gradishar nods and laughs. And so it goes all night during this gathering of old rivals in the Blackwell Hotel located in the shadow of Ohio Stadium. Members of the 1973 Buckeyes and Wolverines are here to reminisce about their epic battle 40 years ago. That year, the annual football game between Michigan and Ohio State ended in a 10-10 tie, but one team still won and the other team lost. The game caused much angst among two sizable fan bases and ultimately changed the Big Ten Conference's bowl structure for good. Now the story is being documented in the BTN Originals documentary "TIEBREAKER," which airs Saturday, Nov. 16 at 7 p.m. ET on BTN/BTN2Go.

The players from these two teams are much older now, well into their 60s. They are heavier, balder, some walk a bit slumped over. But these aging warriors from Ohio State and Michigan still carry a spark and breathe life into their 40-year-old football stories telling them as if they happened just the other day.

Gradishar still looks like he might be able to run down one-time Michigan fullback Ed Shuttlesworth. Once a prowling defensive tackle for Michigan, Dave Gallagher still cuts a dashing figure and appears equipped to go one-on-one with former Ohio State lineman John Hicks. Buckeye running back and icon Archie Griffin? Well, he look likes the best of them all until you see Franklin, who still looks like he could run the option the way he did four decades ago.

"TIEBREAKER," which draws richly from archival footage, documents and first-person interviews as well as from the amazing conversations between the players at that dinner earlier this year. Watch the film and listen hear their stories firsthand as I did. See Franklin describe his bitter disappointment over the eventual outcome. Listen to Griffin and the other Buckeyes express their delight at winning the bid. And experience Michigan kicker Mike Lantry relive the agonizing moments when both of his kicks failed to break a tie on that cold day in Ann Arbor.

But before you experience this one-hour dive into this on corner of Big Ten history, let's set the stage with a look back at that classic game from November 24, 1973.

Ohio State entered the game unbeaten (9-0) and ranked No. 1 in the nation. Michigan also came in perfect (10-0), ranked No. 4. And, like in most every season in this era, the winner of "The Game" would punch its ticket to the Rose Bowl. The Buckeyes also were thinking about winning the national championship. But, first, Ohio State had to beat the Wolverines in Ann Arbor.

"We wanted to get back to Pasadena," Hicks said. "We had gotten beaten pretty badly (42-17) the year before out there by USC. We wanted another shot at it."

An NCAA-record crowd of 105,223 shoehorned into the Big House on Nov. 24, while a national television audience watched and listened to Chris Schenkel and Duffy Daugherty call the game on ABC. Up to that game, Michigan had outscored its foes, 320-58 while Ohio State had pounded their opponents, 361-33. Some team wasn?t going to gets its way. Something had to give.

Ohio State failed to notch a first down in a scoreless first quarter, which set the tone for a game where every inch of yardage seemingly would cost a pint of blood. Finally, Ohio State struck first with a 31-yard field goal by Blair Conway. Bruising Ohio State fullback Pete Johnson made it 10-0 after bulling into the end zone just before halftime after a series of good runs by Griffin set up Johnson?s scoring plunge.

But the game changed in the second half.

"Bo (Schembechler) made some adjustments and went to a Gap 8 defense," said Hicks, leaning forward on a cane. "And Woody (Hayes) wouldn't adjust. He just kept running the ball. He wouldn't throw it."

The third quarter was scoreless, but Michigan was in control. And it showed in the fourth quarter, when the Wolverines' Lantry booted a field goal to get Michigan on the board, making in 10-3 OSU. Time and again, Shuttlesworth battered his way through an Ohio State defense that wouldn?t compromise its scheme.

Midway through the fourth quarter, Franklin hit a key 35-yard pass to tight end Paul Seal to get Michigan into the red zone. But the drive stalled at the 10-yard line. Facing fourth and inches, Schembechler went for it. And, it worked: Franklin faked a handoff to Shuttlesworth, kept the ball and pushed his way 10 yards into the end zone for the tying score. It was 10-10. Plenty of time remained for a surging Michigan team to seize victory from a listless Buckeye team.

But then, it happened.

With 2:23 left, Franklin was decked by Ohio State's Van Ness DeCree breaking the dashing quarterbacks collarbone. Still, Michigan twice got within range for Lantry, whose straight-on kicking style allowed him to launch he ball great distances. He first missed a 58-yard boot by inches. And then, with 28 seconds left in the game, Lantry got one more shot, this time from 44 yards. Lantry missed it.

The 10-10 tie left the nation wanting for more, but more importantly it created a real conundrum: Who would represent the Big Ten in the Rose Bowl?

Those in the Michigan camp felt they had played better than Ohio State in the game and thus merited the invite to Pasadena. The debate raged.

Ohio State had been to the Rose Bowl the year before. At the time, the Big Ten had a policy that only the league champion would go to a bowl-and it was the Rose Bowl.

The Big Ten also had a "no-repeat" rule until 1971. If that had still been in effect in 1973, Michigan would have advanced to the Rose Bowl even if it had lost to Ohio State. But, with the no-repeat rule wiped from the books, the decision as to who would represent the Big Ten in Pasadena was decided on vote by the Big Ten's athletic directors. The story surrounding the secrecy of that vote as told in "TIEBREAKERS" is fascinating all by itself.

According to Schembechler?s 1989 autobiography, the Big Ten was nervous because the conference had lost the previous four Rose Bowls. Ending that skid may have been difficult if Michigan went and quarterback Franklin couldn?t play because of injury.

So, on the day after the game, the Big Ten took a vote.

And Ohio State was tabbed to play in the Rose Bowl.

And Schembechler was livid.

He said it was "an embarrassment to the Big Ten Conference" and claimed "petty jealousies" were involved. Schembechler eventually demanded that changes be instituted to the Big Ten's policies regarding bowl play that would allow for more than one league school to take part in a bowl.

Soon thereafter, the Big Ten indeed changed its bowl policy, allowing more than one team to go to the postseason. But Michigan?s perfect 1973 team had to pay the price for progress.

?It was tough to never go to a bowl despite all we did,? said Franklin, who as the starter from 1972-74 won three Big Ten titles and went 30-2-1 but never went to a bowl. ?But at least we sparked change.?

And a lot of controversy along the way.

?TIEBREAKER? is the first feature-length documentary produced by BTN. The 60-minute film examines the aftermath of the 1973 Ohio State-Michigan football game, which ended in a 10-10 tie and left the determination of which school would represent the Big Ten in the Rose Bowl up to its Athletic Directors. Learn more at www.BTNTIEBREAKER.com.