Mark Weisman: 'There is no other place I'd rather play' 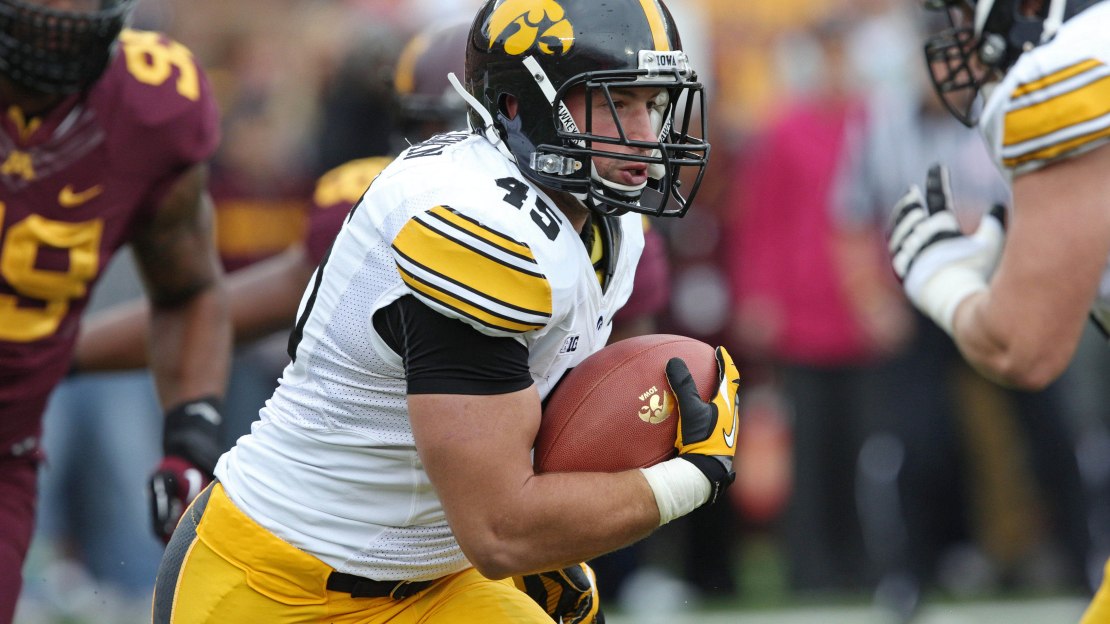 Iowa?s comeback from a disappointing 4-8 effort in 2012 is almost complete. But fullback Mark Weisman and his teammates still have unfinished business.

Weisman and the Hawkeyes (6-4 overall; 3-3 Big Ten) are off this Saturday, giving them time to gear up for a big finish and improve their bowl stock. Iowa became eligible for the postseason with a dominating 38-14 victory at Purdue last week. Michigan visits on Nov. 23, followed by a season-ending trip to Nebraska. Win those, and Iowa?s postseason stock will rise significantly.

This has been a nice turnaround for a Hawkeye program that missed a bowl in 2012 for the first time since 2007. That had some wondering about the direction of the program. But Weisman has helped quell any of those notions, leading the team with 777 yards to go along with four touchdowns.

The junior from Buffalo Grove, Ill., and Stevenson High is part of a deep collection of Hawkeye backs that also includes Damon Bullock, Jordan Canzeri and true freshman LeShun Daniels. They help Iowa rank sixth in the Big Ten in rushing (194.4 ypg). And that rushing attack has taken pressure off sophomore quarterback Jake Rudock, who hasn?t had to carry a big load in his first season as a starter.

I caught up with the 6-0, 236-pound Weisman, who emerged seemingly out of nowhere in 2012 to rush for 815 yards after transferring from Air Force, to get his thoughts on a variety of subjects as the season draws toward an end.

Q: Coming out of high school, you went to Air Force. Did you have any other offers?
A: I did not. I committed the summer before my senior year, I don?t know if I would have gotten any others.

Q: Why Iowa?
A: They recruited me a little out of high school. I had a brother and cousins who went here, so I was familiar with the area. I knew some coaches who knew some coaches here, so they helped me get in contact. It ended up working out for me and was a good decision.

Q: Did you consider any other schools besides Iowa when you left Air Force?
A: Western Michigan or here.

Q: You got off to a good start, running for over 100 yards in four of the first five games. You haven?t gone over 100 since Sept. 28 at Minnesota. Talk about your season thus far.
A: My play has been tailing off a bit, but we have been playing some good teams. A lot of other backs have been getting reps. It doesn?t really matter who carries the ball as long as you get wins. That?s the most important thing.

Q: Are there any backs in the NFL who you would compare yourself to style-wise?
A: I don?t get to watch much NFL because I am here on Sundays and I have a Monday night class. So, I don?t know. It?s hard to say.

Q: What game have you personally been most proud of?
A: I?d say the Minnesota game (23-7 win in which Weisman ran 24 times for 147 yards.) We were controlling the line of scrimmage a lot. The line, fullbacks and backs were doing a great job. We were staying on the field. We finished the game on the field, running out the clock. And that?s important to us.

Q: What?s your favorite play?
A: I like inside zone. I?d rather run up the middle. But, really, whatever is called, I?ll run as hard as I can out there and give it my best shot.

Q: Can you break down the other running backs? skills?
A: Damon (Bullock) is a great pass blocker, fast, a good receiver. Jordan (Canzeri) is super speedy and shifty. He makes tons of guys miss. He?s also good out of the backfield. LeShun (Daniels) is getting better each and every day. He?s a big, powerful back out there. He can do it all.

Q: What has o-line meant to you and the backs?
A: It?s the most important thing. They may not get the most credit, but they are the most vital component. They have done such a good job for us. Every game, the line has done well, which is a credit to them more than us backs. They have done an unbelievable job and will continue to.

Q: What did you think when you saw Iowa picked by most to finish fifth in the Legends Division in preseason magazines?
A: We don?t really look at that stuff.

Q: You have six wins now with two games (vs. Michigan and at Nebraska) to play coming off a 4-8 season. Do you and your teammates feel vindicated?
A: We have missed some games this year, but we are in a good place and now we have to continue to improve and move forward and see where that takes us.

Q: What do you like most about playing in Kinnick Stadium?
A: It?s unbelievable. The fans are great. They are so supportive. It?s really energetic out there. There is no other place I?d rather play.

Q: What are the team?s goals from here on out?
A: We wanted to win a Big Ten championship. That?s out of reach now. We are moving from there and trying to get to the best bowl we possibly can now. You don?t want to win just six games. We will see where we can land.