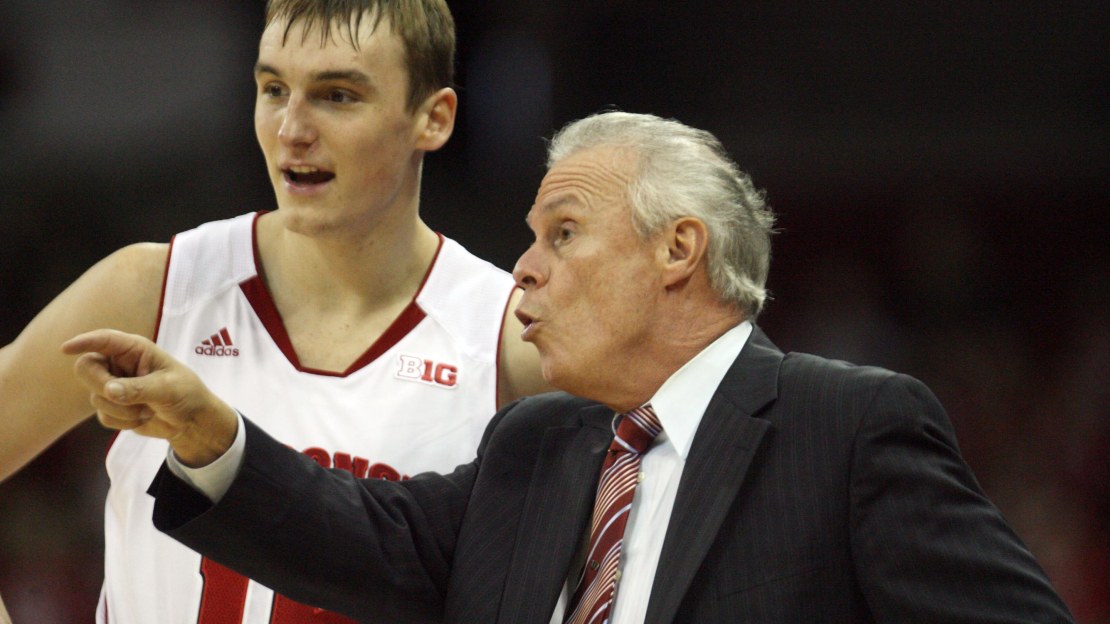 We resume our season preview back-and-forth, with Mike answering Josh's question about Wisconsin–is this team becoming the Atlanta Braves of college basketball? Always a good team, always in the postseason, but never a real threat to win it all?

(Part one can be found here.)

Mike: It feels that way, doesn?t it? Most programs would kill to have the kind of consistent success enjoyed in Madison, but style-of-play complaints end up putting the Badgers under the microscope. Therefore, any time Wisconsin doesn?t get as far in the NCAA tournament as it should, the result is used as validation of the fact that the Badgers just aren?t as good as the computers and nerds say. Bo Ryan can never win in March!

Except that just isn?t true. Ryan has taken Wisconsin to the NCAA tournament in each of his 12 seasons, and he?s cumulatively overperformed his seeding. That profile took a hit this past March, when the 5-seed Badgers got bounced in the Round of 64, but Ryan still has a positive ?performance against seed expectations,? or PASE.

Before last season's disappointing performance, Bo Ryan was a healthy overachiever in the tournament given his seeding. Even now, he's still slightly outperformed his seed on average, though it's by a small margin.

History aside, Wisconsin again looks very good, especially on the offensive end. Friday night?s dismantling of what should be a solid St. John?s defense was very impressive. I think the Badgers are a safe bet to again get a 5-seed or better in the NCAA tournament, and it?s a complete misreading of the data to say that Ryan has a history of underperforming in March. That said, I don?t think this Wisconsin team is a threat to win it all, just because most teams that fall in the 15-20 range nationally aren?t a threat to win it all. There?s no shame in that.

What?s your take on Iowa? I see all the objective numbers saying that this could be a Big Ten contender, but I personally feel like the Hawkeyes? ceiling is limited. I think there?s a very real chance that Iowa finishes worse in KenPom that it did last season (25th). Convince me otherwise.

Josh: No problem. The first point is that Iowa simply returns everyone, except Eric May. May was a useful enough player, but he probably wasn?t one of Iowa?s five best last year. So simply based on returning minutes, this team should at least tread water as compared to last season.

Then factor in the sophomores. Not only does Iowa return a fair number of them (Mike Gesell, Anthony Clemmons, and Adam Woodbury), but at least a couple of them (Gesell and Woodbury) were top-100 players, so the breakout potential for them is even greater. Woodbury especially looks to have a lot of potential. Defensively he was fantastic last year, if we just go ahead and ignore fouls for a minute. He blocked shots while also rebounding at a high level. In fact, there?s a very good chance that he?s the best defensive player in the conference this season.

Then there?s the case of Iowa?s perimeter shooting, which was the principal drag on last year?s offense. While I don?t think the Hawkeyes are going to shoot over 40 percent from downtown, making a third of their attempts should not be a problem if we see some regression back to the mean.

And finally, if you wanted to look for potential impact newcomers, former Badger Jarrod Uthoff might make for a good candidate. Frankly, if I have one complaint about Iowa, it?s one of the same ones I had last year-the schedule. With six teams currently ranked below the top 280 teams in Pomeroy, this has all the makings of another cupcake slate. Frankly, that?s what kept the Hawkeyes from dancing last year. Iowa should be good enough for it not to matter this season, but someone needs to get in McCaffrey?s ear about this. There?s just no reason to tempt fate when the team is this good.

Michigan looks strong again, though predictions seem all over the place. I?ve seen everything from a top-5 team to a top-20 team. Is the range on this team really that big? And how do the Wolverines replace Trey Burke?

Mike: I?ve erred more to the top-20 team side of things when it comes to Michigan, for a couple reasons.

On the offensive side, I see a team full of guys that will have to bump their usage to levels with which they may not be comfortable. Trey Burke and Tim Hardaway combined for a usage rate around 50 percent, and the incoming freshmen are likely not going to come anywhere close to that. That means the returning players who were so good in limited roles will be forced to take a lot more responsibility.

Nik Stauskas and Glenn Robinson III were excellent last season, but they both had usage rates around 15 percent. How much efficiency do they lose when they can no longer pick their spots? It seems at least one of these guys has to become an all-conference performer for Michigan to be top-5 good, and those don?t feel like great odds to me.

My second concern is on the other end, where John Beilein has never shown that he?s capable of putting a great defense on the court. In national terms, Beilein has never finished better than 37th in adjusted defensive efficiency. Maybe Mitch McGary can be the key to Beilein?s best defense ever, but I wouldn?t bet on it.

I?m seeing something like a top-10 offense and a top-40 defense, which gives you an overall top-20 type team. Michigan certainly has the potential to put it all together and be a top-5 team, but that?s not my baseline expectation. If everybody sticks around, next season?s Wolverines could be scary.

Now to your favorite subject-Aaron Craft and the Ohio State Buckeyes. That defense is going to be outstanding, but can they score enough to challenge for the title?

Josh: Sure, it?s possible. Two years ago, Michigan got a share of the title, despite finishing well behind Ohio State and Michigan State in terms of efficiency. So yes, Ohio State can compete for the crown on a wins and losses basis.

But if we?re talking raw scoring margin, I don?t think the Buckeyes belong. Yes, the defense should be very good, but it was already very good last season (12th in the nation, 2nd in conference play). Yes, the team can improve on that, but we?re hitting a point of diminishing returns. As for offense, it?s hard to see how this team won?t suffer a step back this season. As you've pointed out, LaQuinton Ross is basically a downgraded version of Deshaun Thomas. And Ross might improve to close that gap even further this season, but I don?t see him completely replacing Thomas. And then you?ve got to deal with the problem of replacing LaQuinton Ross. After all, if Ross is busy imitating Thomas, who will play the part of the 2012 version of Ross, who was still a very good player?

Further, there are virtually no sophomore minutes to dole out, and none of the incoming freshmen are ranked in the top-25. I therefore don?t see anything but marginal improvements from the supporting cast, none of which will serve to overcome the massive loss of Thomas. In sum, I see a slightly better defense, and a worse offense. Overall, I think that adds up to a half-step back from last year?s team, which is still really good. Anything less than 10 conference wins for the Buckeyes will be a disappointment, but I don?t really expect them to win more than 12, either.

Time for the main course. Any reason not to slate Michigan State as the conference champ?

Mike: I can?t see any argument for the Spartans not to be the favorite. You?ve got all the major boxes checked: a boatload of returning minutes, Sophomore Leaps, a coach with a proven track record of winning big, and a conference POY candidate in Gary Harris. For all the reasons we?ve discussed, it?s hard to see teams like Ohio State, Michigan, Indiana, Iowa, and Wisconsin winning the national title, but a scenario in which the Spartans take home the crown feels fully plausible.

Last season, Michigan State was an improved offense away from being a national title contender. Now, by turning Gary Harris and Denzel Valentine into sophomores, I believe that offense has arrived. The early schedule provides the Spartans with a chance to prove it, as they?ll face Kentucky and North Carolina before the second week of December. I see Michigan State as the clear favorite in the Big Ten, and I?d frankly be shocked to see somebody else win the conference. The Big Ten has a lot of really good teams but only one great team, and it?s Michigan State.

Any qualms with that statement? And who is your pick for Big Ten POY?

Josh: That?s probably right, but I?m going to insert a caveat on Michigan. Lots of uncertainties there, but I still like the upside of that team. But MSU is a no-brainer.

Last week I picked Dekker for my player of the year, and it was largely a coin flip between him and Harris. Both are sophomores, both performed about the same last year. But I like Dekker?s chances to have the ball in his hands on virtually every Wisconsin possession. And really, with everyone else picking Harris, I think Dekker is a great ?value? pick. It?s a toss-up game where the line is 10 points. So I?m sticking with it.

Have I persuaded you on Dekker? And we talked about Vonleh earlier-are there any other freshmen that will challenge him? Beilein does have a history of finding diamonds in the rough, after all.

Mike: I can roll with the Dekker pick. I still think Harris is the slight favorite, since Dekker?s conventional numbers will be stifled a bit by Wisconsin?s tempo, but this might be an instance where we stick to our tempo-free guns. Ladies and gentlemen, Sam Dekker is your BTG preseason POY.

As for the top freshman, Vonleh is clearly a strong favorite. He?s not only the highest rated RSCI recruit in his class (#8), he?s the highest rated RSCI recruit in the Big Ten, period. If Vonleh doesn?t live up to expectations, I?d agree with you that one of Beilein?s freshmen would take his place-either Zak Irvin or Derrick Walton. Until Vonleh shows he?s not the guy, he?s the prohibitive favorite for freshman of the year.

It should be another fantastic season of Big Ten hoops, and the conference might be stronger top-to-bottom than we?ve ever covered.

Now, finally, it's time to get down to meaningful basketball games. Tonight, the Big Ten has two big opportunities to proclaim its dominance. At 6:30pm CT, Michigan State faces Kentucky in the earliest ever matchup of #1 vs #2. At 8pm CT, Wisconsin hosts a very good Florida team. Big time college basketball is back.