Dienhart: These Gophers are making history 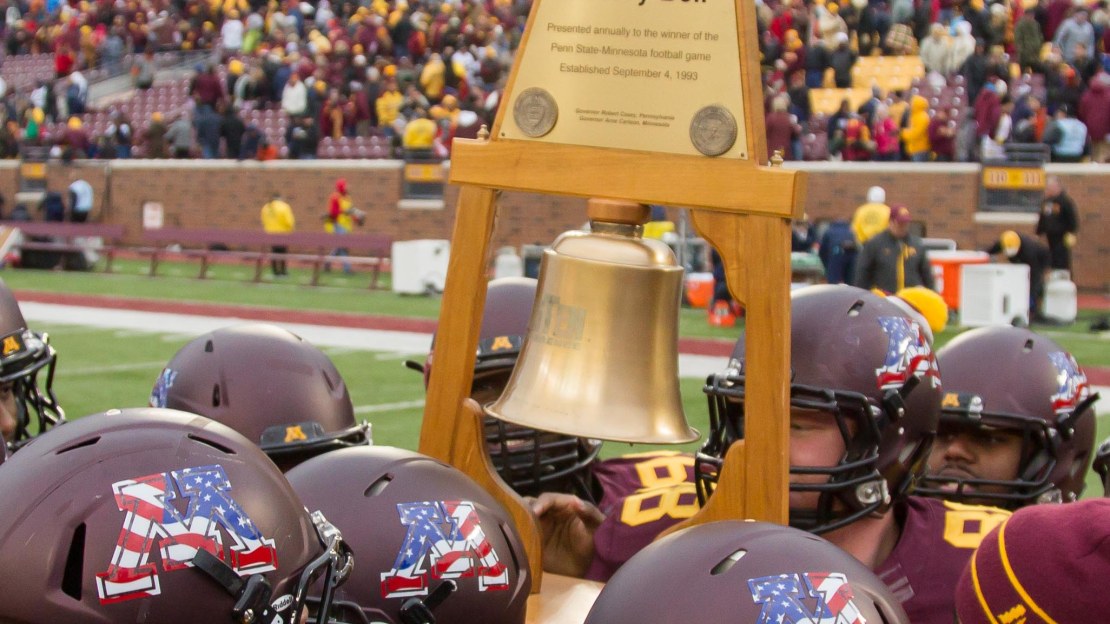 MINNEAPOLIS, Minn. - Just when you thought Minnesota?s season couldn?t get any better, another win happens.

That?s four in a row for the Golden Gophers after a methodical 24-10 triumph over Penn State. And I know they are keeping track in places like Fergus Falls, Ely, Mankato and Albert Lea. Why not? The last time Minnesota won four Big Ten games in a row was 1973. That?s history, which is what this team is making.

That 1973 squad closed the season with victories over Northwestern, Purdue, Illinois and Wisconsin to finish 7-4 overall and 6-2 in the Big Ten under Cal Stoll. Alas, the Gophers didn?t go to a bowl with Rick Upchurch leading the way.

This Minnesota team will go to a bowl. In fact, it figures to go to a good bowl-maybe a New Year?s Bowl, which hasn?t happened since it played in the Rose Bowl after the 1961 season.

Today?s win pushed the Gophers to 8-2 overall and 4-2 in the Big Ten. And the victory epitomized this team. It was a dose of equal parts blood and guts. There were 195 yards rushing, 185 yards passing and countless punches delivered to Penn State?s nose by running back David Cobb, who rumbled for 139 yards rushing.

No razzle. No dazzle. Just a workmanlike effort on a classic gray November day in Minnesota. Jerry Kill and his coaching staff wouldn?t have had it any other way.

?We played as hard as we could today and at the end of the day, that is what really matters,? said Kill. ?Everybody is doing their part for the team; we have an unselfish group of players.?

Back in August, most had Minnesota pegged to finish last in the Legends Division. Why not? The team went a combined 9-16 in its first two seasons under Kill, going 2-6 in Big Ten play each season. There was no apparent reason for grand optimism in the Twin Cities.

Minnesota began the year with promise, pushing to a 4-0 start vs. a soft non-conference schedule. But when the Gophers opened Big Ten play with a 23-7 home loss to Iowa, the groans of ?here we go again? began. That was followed by Kill?s health issues that caused him to miss the game at Michigan, a 42-13 loss.

So, Minnesota stood 4-2 overall and 0-2 in the Big Ten and saw its head coach take an extended leave to deal with trying to control his epilepsy. Were the wheels about to come off the 2013 season? Things looked dicey with games coming up at Northwestern and vs. Nebraska. But that?s when things changed.

?We never threw in the towel, even after we lost our first two conference games,? said acting head coach Tracy Claeys. ?We were disappointed at the time, but we could see ourselves getting better. I believe people who work hard eventually get rewarded, especially if they keep fighting.?

Minnesota fought, shocking most with a gutsy 20-17 win at Northwestern. But that was nothing compared to what happened next, as the Gophers scored the signature win of the Kill era with a 34-23 victory over Nebraska. Last Saturday, Minnesota took a wild 42-39 win at Indiana to keep the party going. That brings us to today, another victory party that has nearby Dinkytown on its ear.

?The players have worked hard every week and defeated a name brand like Nebraska,? said Claeys. ?I still think we have a ways to go as we continue this success.?

You almost expected Minnesota to beat this Penn State team, which has had issues on defense-and with playing on the road. Had it really come to this, expecting the Golden Gophers to beat a team with the pedigree of Penn State, even though it?s hamstrung by scholarship limits?

Minnesota delivered, taking care of business like a good team is supposed to do. Now, the Gophers can let their minds run wild with possibilities. The team is off next week and then finishes with a visit from Wisconsin and trip to Michigan State. Could Minnesota win the Legends Division?

The Gophers haven?t enjoyed these types of highs since Glen Mason patrolled the sidelines of the Metrodome from 1997-2006. During the halcyon days of the mid-2000s, Mason had the program rolling. The high-water mark was in 2003, when the Gophers notched 10 wins and were in the midst of a five-year bowl run.

That ushered in the disastrous Tim Brewster era, which was big on bombast but small on results. After three dreary seasons and a 15-30 mark (6-21 Big Ten), the plug mercifully was pulled.

We often hear about a coach being a good fit for a program. Well, if that?s true, Kill and Minnesota are like hand and glove. It?s a perfect match of underdog coach and underdog program.

Kill is college football?s ultimate dues payer. He didn?t get a plum job at 30 because of his last name. Nope, Kill has had a connect-the-dots career that has taken him from outposts like Pittsburg State, Webb City High School, Saginaw Valley State, Emporia State, Southern Illinois and Northern Illinois ? to here. Along the way, he has learned to succeed despite not having the best players, the best budget, the best facilities or the best of anything, really.

Kill wasn?t on the sidelines today. He hasn?t been since a seizure kept him from attending the game at Michigan on Oct. 5. Soon thereafter, Kill announced he was taking an open-ended leave of absence to tend to his health and epilepsy. But instead of fracturing a sputtering team, Kill?s health issues have served as a galvanizing force.

Kill has slowly worked his way back into a work routine, to the point where he goes to the office and practices and now wears a headset in the press box. Hey, it?s all working. In fact, some say the team plays with more calm with Kill sitting upstairs. It sure looked composed on this day.