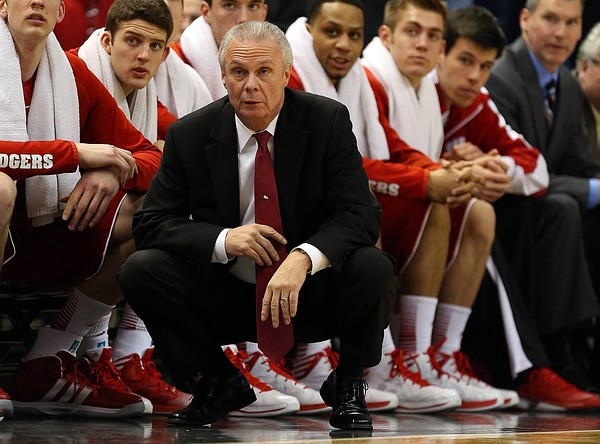 Let?s kickoff this Thursday with a fun video/photo piece from USAToday on the 10 angriest college basketball coaches. How do you define angry? That?s the point, it?s subjective. Regardless, the Big Ten is well-represented. No, Nebraska?s Tim Miles isn?t on this list. He?s at the complete opposite end of this scale! He is the Wally Cleaver of hoop coaches.

Devin Gardner was pulled late in the Michigan State game, but he says he wanted to finish. That?s over. The junior says he?s now ready for this week?s tilt vs. Nebraska. Good, because he?ll need to be a star.

Nick Baumgardner of Mlive.com says Gardner was sacked seven times and took countless other hits from the MSU defense. He was eventually removed from the game for Michigan's final drive in favor of freshman Shane Morris, a decision he says wasn't his.

"I would have liked to stay in," Gardner told reporters Wednesday. "But they said it was out of reach, and they wanted Shane to get an opportunity to (experience that environment)."

As far as Gardner's physical health is concerned, the junior quarterback says he's good to go at Nebraska.

Interesting take on Cleveland.com, which says despite being off this Saturday this is the most important week for Ohio State since 2007.

Six years ago, Ohio State's players and fans sat down for the most important weekend of the Buckeyes' college football season. And Ohio State wasn't playing. On that day, OSU went from No. 3 to No. 1 in the BCS standings after Missouri and West Virginia lost. The Buckeyes played for the national title.  This Saturday, the Buckeyes will be rooting to see if Alabama, Oregon or Florida State can lose to help vault it up the BCS standings again.

The great Bob Flounders of Pennlive.com answers questions in his mail bag. Among the interesting ones: Has the Nittany Lions defense taken a step back?

Flounders doesn?t think that PSU has regressed on that side of the ball. It just typically has issues with mobile quarterbacks. Lots of defenses do. Minnesota?s signal-callers aren?t super athletic, but they can run a bit. Beware, PSU.

The great Mike Griffith of Mlive.com takes a look at the Rose Bowl chase for Michigan State and other teams.

Know this, Spartans fans: If Nebraska defeats Michigan on Saturday in Ann Arbor, Michigan State will likely have to go where no Spartans team has gone before — and become the first team in school history to defeat the Cornhuskers. Michigan State is 0-7 all-time against Nebraska, and it's the one Big Ten program that Spartans coach Mark Dantonio has not beaten.

Remember when the Ohio State wideouts were considered to be a ?clown show?? Well, those days are long gone.

Philly Brown, Devin Smith and Co., have developed into one of the top receiving corps in the Big Ten. It has been an impressive transformation and added needed playmaking skill to the attack.

Lee Barfknecht of Omaha.com points out that Minnesota is on the brink of a historic win.

Minnesota has won four Big Ten games in a row. It the Gophers push the skein to four with a victory over Penn State, it will the first time the program has won four league game in succession since 1973-when acting head coach Tracy Claeys was 4.

?It just shows the progress we are making,? Claeys said this week. ?We're trying to establish new standards here. I didn't realize that. That's pretty amazing. Also says the Big Ten is a tough conference.?

Also, a victory for the Gophers over Penn State would produce the school's highest win total since a 10-win season under Glen Mason in 2003.

Marcus Fuller of the St. Paul Pioneer Press says Minnesota running back David Cobb is in the midst of a big season. No doubt. And it has been a key to the Gophers? run of three wins in a row, keeping alive Legends Division title hopes.

Cobb has ripped off three straight 100-yard games and is on pace to become the program's first 1,000-yard rusher since Amir Pinnix in 2006. He has 803 yards rushing this season, so Cobb would only need to average 49.3 yards in the last four games (including the bowl game) to reach 1,000.

"I would like to get it," said Cobb, who had a career-best 188 yards rushing in last week's 42-39 win at Indiana. "I think it's definitely attainable with a couple games left in the season. If not, I would be happy with a couple more wins, too."

Every player who has stayed four years under Michigan?s Tom Izzo has gone to a Final Four. Well, that streak in on the line, as seniors Keith Appling and Adreian Payne enter the season still Final Four-less.

?Me and Adreian do NOT want to be the class that breaks The Streak,? Appling said.

With expectations as big as they?ve been since the 2000 national championship season, the Spartans have their eyes firmly fixated on college basketball?s biggest prize.

I believe we have reached the point where more people are asking for RK3 to play. We have have come a long way. #huskers

My take: Throwing that Hail Mary was the best thing Ron Kellogg III could do for his career.

Kenny Bell continues to practice. Fisher said they're being careful to not overextend him in prep work. Jamal Turner still out. #Huskers

My take: The Nebraska receiving corps needs these guys at Michigan.

Either the Florida Sun-Sentinel had some really bad info, or OSU doesn't want it out there that Fick is interviewing during the season.

My take: And so the Coaching Carousel Dance begins.

Someone just e-mailed me to tell me he bought two tickets to the Iowa-Purdue game on StubHub for 25 cents each. http://t.co/gWqRzTHcFy

My take: Now this is a bargain.

My take: This is great news for Wisconsin.

No Outback Bowl reps coming to watch the #Gophers this week. But they're planning to attend the Wisconsin game on Nov. 23.

My take: This is good news. And it seems like a dream.