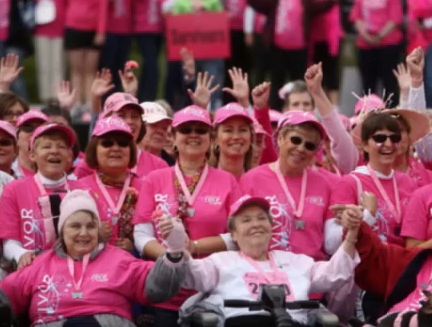 Nancy Brinker, a member of the University of Illinois? Class of 1968, has defined LiveB1G for more than 30 years.

In 1980, Brinker lost her sister, Susan Komen, to breast cancer. Brinker promised her sister that she would work to rid the world of the terrible disease. That promise became action, and the Susan G Komen for the Cure Organization was born in 1982.

In more than 30 years of fundraising, raising awareness and funding of research, the organization has made an enormous impact. Komen for the Cure has raised more than $2 billion, investing more than $790 million dollars into groundbreaking research and another $1.6 billion dollars into community outreach programs.

The organization has also helped more than 2.5 million breast cancer patients become survivors in the United States. Thanks in large part to the efforts of the Komen for the Cure organization, death rates from breast cancer have declined by 33 percent since 1990.

Brinker?s leadership has been recognized by the White House on a number of occasions. Brinker served as United States Ambassador to Hungary from 2001 to 2003 and as President George W. Bush?s White House Chief of Protocol from 2007 to 2009. She also received the Presidential Medal of Freedom from President Obama in 2009. In 2010, Brinker put pen to paper, writing the book ?Promise Me: How a Sister?s Love Launched the Global Movement to End Breast Cancer.?

While personal accolades have come, her focus on beating breast cancer has remained paramount.

In September, Brinker made a significant transition. She is now the organization?s Founder and Chair of Global Strategy. In this role, Brinker will focus on building strategies and partnerships to continue the mission of the organization - improving and saving lives impacted by breast cancer.

Another exciting development is the launch of Brinker?s own website, which includes her personal blog. Here, patients and partners, organizations and individuals can keep up with what Brinker is doing to continue keeping the promise she made to her sister more than 30 years ago.

Check out her personal site, nancygbrinker.com, and the home site for the Susan G. Komen For the Cure Foundation, ww5.komen.org.