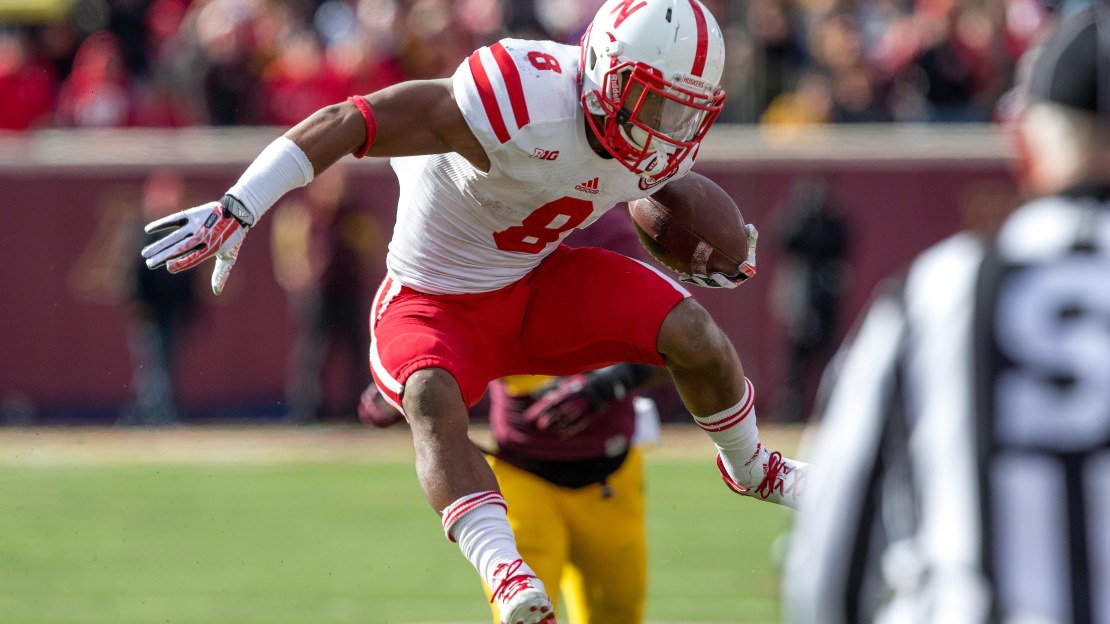 The nation is still buzzing over the Hail Mary pass (Watch it!) that Nebraska completed in the dying moments last Saturday to beat Northwestern, 27-24. But it wouldn?t have happened if Ameer Abdullah had not picked up a huge first down on the fourth-and-15 dump-off pass featured in the video above.

It was just another big play for the Nebraska running back in what?s becoming a special season for him.

The 5-9, 190-pound junior from Homewood, Ala., is the top rusher in the Big Ten after his 127-yard effort last Saturday. Abdullah now has 1,108 yards on the ground and six scores, averaging 7.1 yards per tote. Wisconsin?s Melvin Gordon is No. 2 with 1,074 yards, averaging 8.7 yards with 11 touchdowns. Ohio State?s Carlos Hyde also is considered by most to be one of the league?s top backs, but his numbers are muted because of a three-game suspension served to start the season.

Abdullah may be the best of this holy trinity of Big Ten backs.

Without a doubt, Abdullah has been the Cornhuskers? top offensive player in 2013. And the team will need to ride him down the stretch, beginning with a big game at Michigan this Saturday. A visit from Michigan State follows in what is a huge two-game skein that will determine if Nebraska (6-2 overall, 3-1 Big Ten) can win the Legends Division for a second year in a row.

Abdullah caused a bit of a stir the other day when he said he doesn?t like Michigan, which whipped Nebraska, 45-17, the last time it visited Ann Arbor in 2011.

?Me, honestly, I?m not a big fan of Michigan,? Abdullah told reporters on Monday. ?Nothing would make me happier than to go up there and shut them up.?

I caught up with Abdullah as he prepped for the Wolverines.

Q: What?s it mean to lead the Big Ten in rushing?
A: It feels good. But we have a lot of games left. I can?t get caught up in that now.

Q: Do you think you?ve been overlooked among Big Ten backs, what with the big seasons by Wisconsin?s Melvin Gordon and Ohio State?s Carlos Hyde?
A: No. Me and Melvin have been friends since we graduated high school. We played in the same high school All-American game. I just started to follow Carlos Hyde on Twitter, trying to build a little relationship with him. They are dynamic players. Carlos Hyde runs with such aggression and speed. Melvin is a great balance between finesse and power. Those guys deserve their accolades. They work hard. They both have a special place in my heart for running backs. To see what they have done is amazing. I always wish them the best.

Q: How would you describe your style?
A: First, I?d like to say that I?m fortunate. I have a great supporting cast. I think I have the best blocking receivers in the Big Ten and maybe the country. I have an o-line that cares about me no matter who is in after we had a few guys go down with injury. They understand the importance of the running game for our team and they give it their all every play.

Q: Who is you all-time favorite Nebraska running back?
A: I would probably say Ahman Green. Maybe Rex Burkhead, too. Rex was a great teacher for me. I learned a lot from him when I first got here. Ahman Green, what an athlete. 6-1, 230, could run a 4.3, had balance, speed and was patient. He was a great back here and I love watching him. He?s the most modern back I can watch and really learn from.

Q: What has been your favorite run so far this season?
A: I think it was a run vs. Southern Miss earlier this season. It was a 30-something-yard run. It was Zone Stretch Right and I stretched along, did a good job cutting off the front side and I cut and I thought I was gonna fall. But I put my hand down for a couple steps and the defense thought I was down and I got up and ran for a touchdown. That was a real special run for me.

Q: Aside from Nebraska?s Memorial Stadium, what?s your favorite Big Ten venue to play in?
A: They all are good. The stadiums are all big in this league. But I would have to say Ohio State or Camp Randall. Those two places are special.

Q: Inside, outside? No preference?
A: No. I don?t mind going between the tackles. And I can go outside, too, if needed.

Q: Where would you take a visitor to eat in Lincoln?
A: A nice place? I?d take them to Misty?s. It?s downtown. It?s really good. Great service. They have good steaks. For a casual meal, there is a new place called The Topper Grill. The owner is a great guy. He?s hilarious. He makes the best Philly cheesesteak I ever have had in my life.