Dienhart: Here's what I learned in Week 10 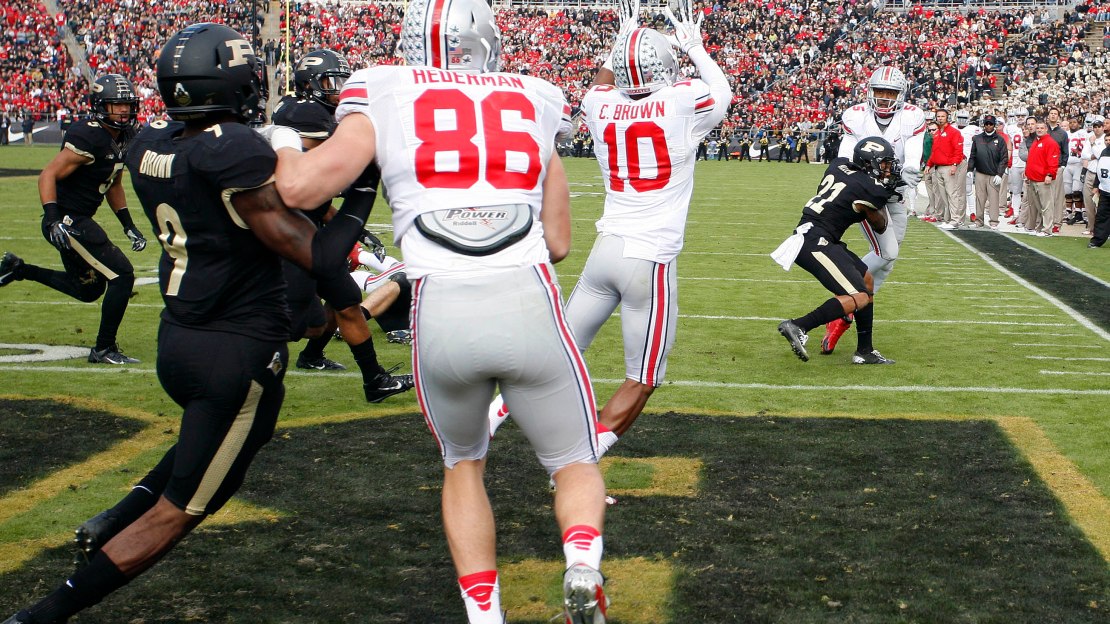 There was so much to learn on Saturday, one of the most exciting days of action all season. A last-second win by Nebraska ? a close finish between Minnesota and Indiana ? overtime between Penn State and Illinois. Here?s what I learned.

1. If you haven't noticed it yet, Ohio State is good. Really good. For the second game in a row, the Buckeyes annihilated a foe. Last week, it was Penn State (63-14). This week, it was Purdue (56-0). So, add it up, and that?s a 119-14 advantage for OSU the last two weeks. This is exactly what a team in hopes of inching up the BCS standings needs to do. I pity the upcoming teams on the Ohio State schedule. That would be you, Illinois, Indiana and Michigan.

2. Ohio State vs. Michigan State would be the best Big Ten title game we could have. Honestly, it may be Ohio State-Wisconsin, but they can?t meet because they are in the same division. The Buckeyes won their meeting vs. the Badgers in Columbus, 31-24. But I?d love to see them play on a neutral field. But, hey, Ohio State-Michigan State in the Big Ten title game would be a heck of a prize.

3. The Buckeyes? BCS hopes would be boosted if Michigan State can win out and take the Legends Division title with an 11-1 mark. By then, the Spartans likely would be fairly highly ranked, giving the Buckeyes a game vs. a touted team that would help its BCS ranking if it would beat MSU.

4. How big could Minnesota?s season-ending trip to Michigan State be on Nov. 30? There is a slim chance the Gophers-Spartans game could be for the Legends Division title. Who would have dared type that back in August? At the least, Minnesota could be a big spoiler for the Spartans, as the Gophers have become a hot team with three wins in a row. And they could still be rolling when they come to East Lansing.

5. Indiana?s bowl hopes are over. Yes, the Hoosiers are 3-5 with four games left. Win three of the four, and Indiana will qualify for the postseason for the first time since 2007. Illinois and Purdue come to Bloomington. Have to like IU?s chances in both of those games. But the problem? The other two foes are Wisconsin and Ohio State on the road.  Can Indiana win either of those? Not likely.

6. Nebraska is the only viable threat to Michigan State in the Legends Division. The Cornhuskers have just one league loss, while the Spartans are still perfect. But Michigan could do Michigan State a big favor by beating visiting Nebraska next Saturday. A Wolverines? win vs. the Huskers would give MSU-which is off this Saturday–a two-game cushion in the Legends, taking some importance off the Spartans? trip to Lincoln on Nov. 16.

7. Nebraska?s Ameer Abdullah may be the top running back in the league. At the least, he?s in the conversation with Wisconsin?s Melvin Gordon and Ohio State?s Carlos Hyde. Abdullah has rushed for over 100 yards in seven of eight games this season. Abdullah has a league-high 1,108 yards rushing to Gordon?s 1,074. Hyde may be leading them all if he hadn?t missed the first three games with suspension.

8. I will be shocked if Northwestern gets bowl eligible. The Wildcats have lost five in a row after a 4-0 start. The last three setbacks have come by a combined 13 points. (Close losses were an issue in 2012, too, when NU blew second-half leads to Penn State, Michigan and Nebraska.) NU has home games left vs. Michigan and Michigan State, as well as a game at Illinois. Can the Wildcats win two of those? I don?t think so.

9. Tracy Claeys, Big Ten Coach of the Year? How about it? The guy is now 3-1 as acting head coach of the Gophers, filling in while Jerry Kill tends to his health. It has been a remarkable run for Minnesota under Claeys? stewardship, as the Golden Gophers are 7-2 overall and 3-2 in the Big Ten.

10. Iowa is a big tease-but no more. It?s this simple, really. The Hawkeyes are good enough to beat the teams they?re supposed to beat-and nothing much more. That fact played out in the home loss to a superior Wisconsin team. The Hawkeyes have beaten a pedestrian collection of teams in Missouri State, Iowa State, Western Michigan, Minnesota and Northwestern. Iowa has lost to Northern Illinois, Michigan State, Ohio State and Wisconsin-who have a combined three losses. So, if this pattern holds, Iowa figures to finish 6-6 overall and 3-5 in the Big Ten ? average.