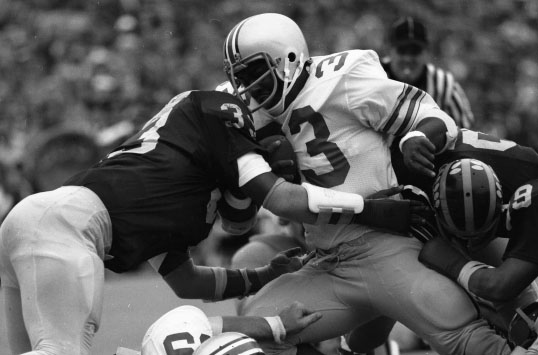 Ohio State's Archie Griffin, the game's only two-time Heisman Trophy winner, stopped by the BTN broadcast booth during the Ohio State-Purdue game Saturday at Ross-Ade Stadium. We asked Griffin about the memorable 1973 Ohio State-Michigan 10-10 tie, which BTN/BTN2Go will profile in a one-hour documentary called Tiebreaker. Watch our interview with Griffin now, and don't forget to catch Tiebreaker at 7 p.m. ET Saturday, Nov. 16.

Want to know more about Tiebreaker?

The 60-minute documentary examines the aftermath of the 1973 Ohio State v. Michigan football game that ended in a 10-10 tie. With both teams sporting identical 7-0-1 conference records, Big Ten Athletic Directors were left to vote on which school would represent the Big Ten in the Rose Bowl. At that time, only one Big Ten team could play in a bowl game. In a controversial vote, the Big Ten Athletic Directors voted to send Ohio State to Pasadena. Michigan head coach Bo Schembechler called the decision ?the lowest day of my athletic career.?

Tiebreaker features rare archival footage and interviews with student-athletes, coaches and administrators. The film includes drama and excitement from the battle on the gridiron, featuring audio from legendary Michigan radio announcer Bob Ufer, as well as details surrounding the controversial vote.

And here's a preview to the documentary: