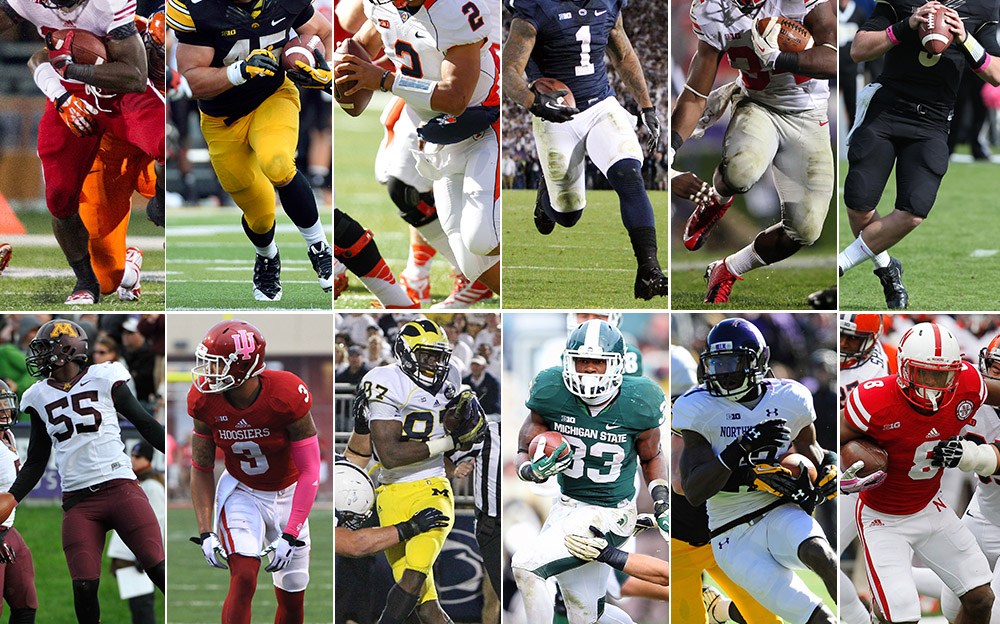 It?s an intriguing slate of six games, the first time since the third week of the season that all 12 teams are in action. Are you are ready?

1. If your team needed to drive 80 yards in the final minutes of a game for a winning touchdown, which quarterback would you want to lead your team?

Answer: D. It has to be Miller, right? Now that he looks to be 100 percent healthy, he?s among the most dangerous quarterbacks in the nation. His ability for improvisation is uncanny, as he can buy extra time with his nimble feet to extend plays and find an open receiver. And, if all else fails, Miller can tuck the ball and run. He?s Ohio State?s top playmaker and the Big Ten?s most exciting player.

Answer: C. The Hawkeyes were coming off a 4-8 season that saw the team lose its last six games.  Look at Iowa now. The Hawkeyes are 5-3 overall and 2-2 in the Big Ten, still in the thick of the Legends Division race with wins over Minnesota and Northwestern. A game at Purdue on Nov. 9 should allow Iowa to punch its postseason ticket. But the Hawkeyes have to be thinking bigger. And they will have ample opportunity to impress with games vs. Wisconsin this Saturday, as well as a visit from Michigan and trip to Nebraska.

3. After this Saturday, what?s the most intriguing remaining game?

B. Nebraska at Michigan, Nov. 9

Answer: A. ?The Game? takes the honor. Why? Because the Buckeyes figure to be 11-0, trying to cap a perfect regular season and stay in the hunt for a spot in the BCS title game. And, Ohio State will have to walk through its biggest rival in one of the sport?s most iconic rivalries to get win No. 24 in a row. It just doesn?t get any better than this, does it? But, I do like the Michigan State at Nebraska game, which could be a de facto Legends Division championship game.

The Wisconsin sophomore has been a sensation in 2013. Gordon paces the Big Ten with 1,012 yards rushing, averaging 9.5 yards per carry with 11 touchdowns. Hyde has been a mega force since sitting out the first three games due to a suspension. Hyde has rushed for 590 yards and seven touchdowns, averaging 6.7 yards per carry. He has been on a roll the last three games, rushing for over 100 yards in a single half in each game en route to running for 168, 149 and 147 yards. He literally carried the Buckeyes to victory in games at Northwestern and Iowa. Still, Gordon is the Big Ten?s most dynamic runner, a longer strider who can get the edge and go the distance or pound the ball between the tackles.

5. Aside from Michigan?s visit to Michigan State, what is the most intriguing matchup this Saturday?

A. Wisconsin at Iowa

B. Minnesota at Indiana

Answer: A. The Badgers and Hawkeyes haven?t met since 2010. And in that game, Wisconsin used a fake punt to help seal a victory. Wisconsin became a Big Ten power by modeling its program after Iowa. And now, the Badgers have passed the Hawkeyes in the league pecking order. A win by Iowa would easily be the team?s most impressive of 2013 and stamp it a legit Legends Contender. The Badgers want to win out in hopes of maybe earning a BCS at-large bowl berth.