How does Michigan fill those slots? 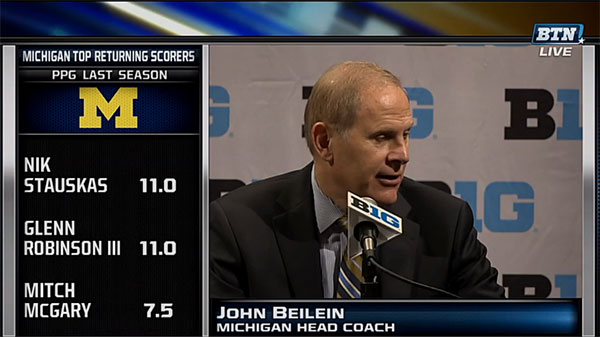 Michigan lost key players in Trey Burke and Tim Hardaway, Jr., from a team that reached the national title game. But this edition of the Wolverines looks formidable even though it has a combined 33 points to replace with Burke and Hardaway gone. A key guy: Glenn Robinson III.

?Really, last year he was not an inside player at all,? said John Beilein.? So he's been a perimeter the whole time. I think the biggest difference is what I just alluded to. There's 80 more minutes and there's a good 20 to 30 shots, scoring opportunities that Trey and Tim rightfully took upon themselves last year that are wide open. We want him to fill a lot of those opportunities, attacking from all different sides. We can play big. We can play guards - all guards. We can do a lot of things. He'll probably be on the floor no matter what we do.?

Robinson surely will get help from freshmen Zak Irvin and Derrick Walton. Irvin is an uber-talented wing who was Indiana Mr. Basketball. Walton is a touted jet-quick point man. They?ll blend with veterans like Mitch McGary, Caris LeVert, Nik Stauskas and Jordan Morgan. What?s it all mean? Michigan can count on having a target on its back after last season?s 31-8 effort-no matter if Beilein believes the target is getting bigger.

?No, I don't think about that at all,? Beilein. ?I think all the time that we are — we're just trying to be the best that we can be. And we have enough things to do to grow our program right now let alone worry about any target on our back. We just keep playing and trying to improve and take each day trying to improve, really.?