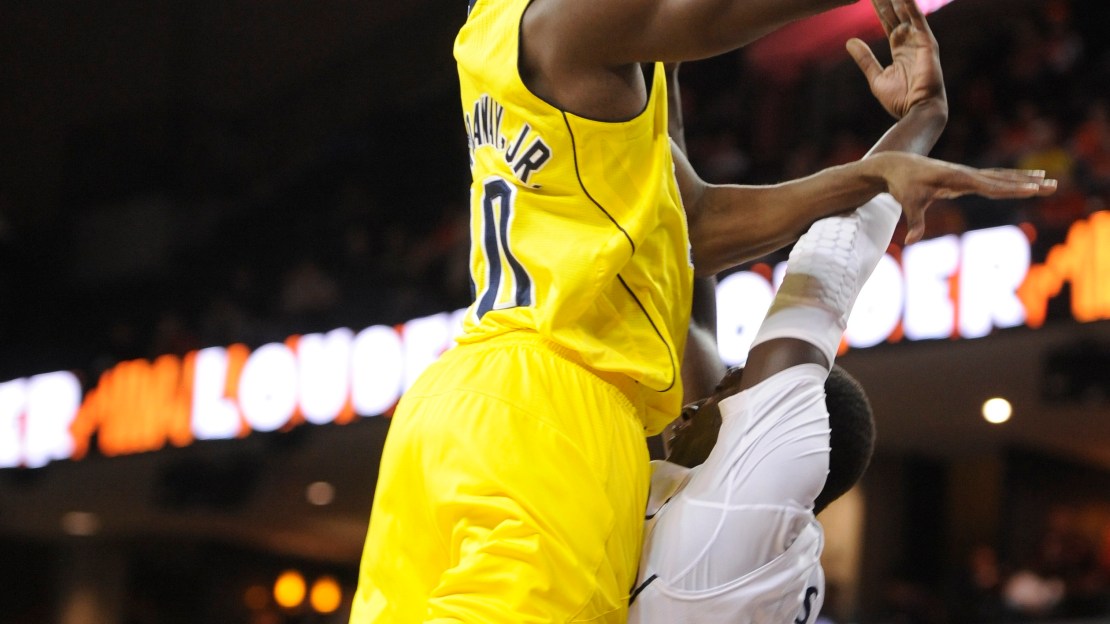 Brace yourself, fans: There could be a lot of fouls called in games this season as players adjust to two new rules changes that figure to have a profound impact. Officials are supposed to whistle hand-checking a foul. No more: no harm, no foul. You touch a player cutting through the lane, and you?ll hear the shrill of a whistle. The goal: To boost sagging offensive numbers.

Officials also will call the block/charge differently. The alteration on the rule was made by the NCAA after studies showed that referees too often were getting the block/charge wrong. Too often, charges were being called on the offensive player and not enough blocks on the defense.

Here is reaction to those two changes from Big Ten coaches:

I don't know yet. Honestly, I don't want to avoid the question. I've gotta see it — I've gotta see it for a couple of weeks. And I want to see it across the board, if that makes sense. And then I think the coaches that I've spoken with, we have to take — if it's going to be this way — now some guys are saying our exhibition game wasn't that way, it was just like it always is. Others are saying, oh my. So for all of us, I think we're looking at saying, okay, we've got about a two-, three-week window where we have to look at this and analyze. It may be subtle changes, it may be big changes that we have to make just in terms both offensively and defensively to adjust and as all coaches try to do gain an advantage.

If I talk to my buddies, I'm concerned. If I go off our exhibition game, you know, and it's hard to tell when you play with the team and you beat them handily, it's hard to tell. But we did bring in officials for four or five different practices. And it's a little concerning. I think sometimes we have knee-jerk reactions and it will take the veteran guys to make sure they understand. I'm really in favor of the block charge because I felt people were just running under guys and falling down like bowling pins. And I didn't like that. But if we want to make this into a complete non-physical game, you know I worry that is that going to be longer games, boringer games, is it going to up scoring, are people going to play more zone?

There's always different things that go with each rule change. But we'll adjust and players will adjust and officials will adjust and our conference office and everybody I think will come up with it. But a little bit of a concern that first couple of weeks since we have a couple of big games, and I'm sure there will be pressure on the officials, pressure on the players, pressure on the coaches, on how it's called and what you do, and we'll see. Some of the guys I've talked to around the country, friends of mine, former assistants, I've been paranoid about it because they played in games where there's 70, 80, 90 free throws being shot. And that's a little scary. But I think it will balance out. It will be all right.

It appears to me it's going to have a tremendous effect on the game. It only stands to reason there will be a lot more fouls called out and away from the basket. What I don't want to see is touch fouls away from the basket and guys getting mugged off the ball, because that won't work. I've been saying for years we need to clean up those collisions at the rim. So I think that is brilliant what they're doing there, to protect the driver. Too many guys that were talented enough to go by their man and three guys falling down before the guy even got to the rim. So I think to clean up those collisions at the rim is a great thing.

It will be interesting to see if the moves out front and the touch fouls will be sustainable. I think in theory it will work. In practicality it may make the games long and grueling, and it may have an adverse effect with regard to we're trying to open up the game and teams may have to play more zone because you have to protect your guys who are in foul trouble. So I think when it's all said and done, we really don't know what's going to happen. But I like the thought process. I'm an offensive guy. We're going to drive the ball to the basket. So those rules would in theory help us. So we'll see how it ends up.

The people that have changed the rules over time have really had a good record at doing this. There's some experimentation probably we would have preferred at times. But we led the country in not fouling last year. I think we were number one or number two in not fouling. So I don't think there's going to be a big change in how we coach.

And the block charge, I hope it simplifies things. I do not know that it does. We have to wait. And this is where I defer to the experts and say, okay, if they think it will work, they've done enough research on it, we just go and we adjust from there. But we've had a scrimmage and inner squad scrimmage. I haven't seen the difference, in particular, in how the game was called against us. And I think other teams have a drastic difference. But who knows.

I think in theory, in talking with them, it's something they feel they're going to stay with. If you're telling me the way the games are going to be called and exhibition games are the way they're going to call them in the Big Ten, we're going to have a lot of good players watching basketball. I don't think that will sit with people in this room, with players and coaches across the country. It's definitely not going to sit with the fans. I think there's a different way to increase scoring, if that's what they're trying to do.

The only thing I do as a coach is take what our officials coordinator tells us and adjust, and then within the course of a game try to get your players to adjust. So we're trying to be better in terms of position defense and keeping the ball in front of us without using our hands. But it will be interesting to see what happens here. If the way the games are getting called in exhibition games are the way they're going to be called in nonconference, then the reaction from everybody.