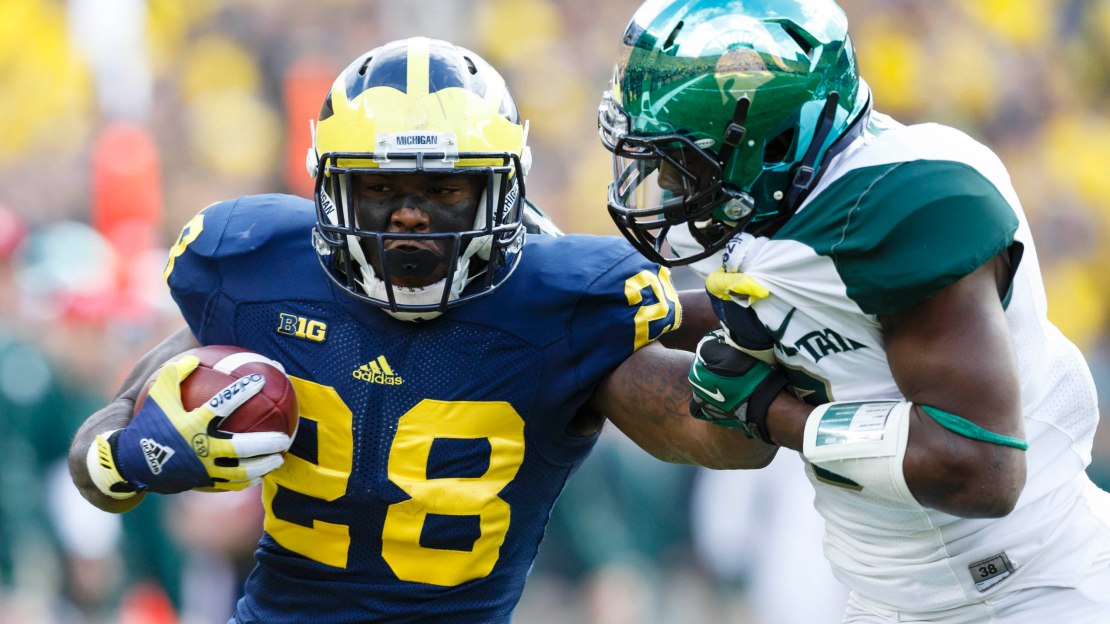 Speaking to reporters Tuesday after practice, Toussaint described how this rivalry has become "personal" for him over the years, and one he's taking overly serious this year. And he really doesn't care who knows it.

"We labeled them as a little brother," Toussaint said to Mlive.com. "And, you know, little brother always wants to prove themselves and try to beat up the big brother one day.

"I think they really take offense to that."

Some good stuff in advance of Saturday, huh? I love it.

And then there is this from Michigan State linebacker Max Bullough, who says ?we should win this game.?

Michigan State's All-Big Ten middle linebacker and senior team captain knows the difference between hype and reality, and he wants to make sure that this week's captive audience understands the Spartans' mindset, according to Mlive.com.

"And I think that they're probably saying the same thing, and I think every team says that every week. That's not me saying anything that's locker board material or anything."

If imitation truly is the sincerest form of flattery, than why do so many Iowa football fans despise the Wisconsin Badgers? Harty says it?s because imitation loses its appeal when the program doing the imitating becomes as good or arguably better than the one it used to imitate. As great as Hayden Fry was in rebuilding the Iowa program in the early 1980s, you could argue that his former Hawkeye assistant Barry Alvarez had even more success at Wisconsin a decade later. Fry and Alvarez both won three Big Ten titles as head coaches, but Alvarez also won all three of his Rose Bowl games, whereas Fry was 0-3.

Speaking of Wisconsin ? you can say what you want about Bret Bielema, but he didn?t leave a mess at Wisconsin while leaving for Arkansas.

Rather, Mike Hlas of the Cedar Rapids Gazette says Bielema left the Badgers? cupboard well-stocked for Gary Andersen. The players Andersen inherited are capable, and already knew how to win. Bottom line: Andersen is walking tall at Wisconsin. And he can thank Bielema.

The Wisconsin-Iowa game figures to physical. Badgers linebacker Chris Borland knows that. And, he looks forward to it. After a steady diet of mostly spread offenses, Borland and the UW defense finally get a chance to measure themselves against a power-running offense that many fans still identify with the Big Ten Conference - as outdated as that may be.

Check out Borland in this video talking about his hamstrings. He hurt one in the last game vs. Illinois.

David Jones of Pennlive.com says if you think Penn State is in bad shape, you should check out Illinois.

The Illinois defense has been a real sore spot. Jones notes that nothing about Illinois? defense appears functional. Its opponents? pass efficiency rating (163.4) is easily the worst in the league, allowing a runaway league-high in completion percentage (.663) and low in picks (1), this after facing not exactly a murderer?s row of quarterbacks. Then there?s the Illinois run defense, which has been gashed for a league-worst of 5.1 yards per carry and next-to-lasts in rushing TDs (17) and yards per game (219), exceeded only by Indiana. Oh, boy.

From the files of Doug Lesmerises of Cleveland.com: OSU is the only team in the country that hasn?t allowed a run of at least 20 yards this season. Impressive. Thirteen times last season an opposing back ran for 20 yards or more.

OSU ranks sixth in the nation against the run, giving up 96 yards per game. The Buckeyes haven?t faced a great back every week, but they have made it this far without Wisconsin?s Melvin Gordon or James White, Northwestern?s Venric Mark or Cal?s Brendan Bigelow running wild.

?Hopefully we learned from last year,? defensive coordinator Luke Fickell said. ?I think that's probably the biggest key to what we do — keep the ball in front of us and make sure we're running ourselves inside out and be aggressive. Everybody talks missed tackles. No, we can't worry about missed tackles. You miss a tackle with good leverage, you've got nine, 10 other guys coming to the football.?

So, I guess this Buckeye defense isn?t so bad, huh?

Taylor Martinez is ailing. And, because of it, he isn?t helping Nebraska. So says Sam McKewon of Omaha.com.

What?s it all mean? Tommy Armstrong, Jr., and Ron Kellogg III may get back onto the field vs. Northwestern this Saturday. And, you know what? That may not be a bad thing.

Now hear this: BCS schedule breakdown favors Ohio State and Florida State in the race among unbeatens to reach the title game. So says Cleveland.com.

But that's strictly based on the difficulty of the schedules. It doesn't factor in the possibility – or, depending on one's point of view, the likelihood – that Alabama and Oregon are good enough to go unbeaten regardless who they play.

You may have noticed that Nebraska?s defense didn?t look physical vs. Minnesota. Jon Nyatawa of Omaha.com tries to explain.

Nyatawa says it appears that too many Husker defenders are trying to be playmakers without a complete understanding of their responsibilities. So much of the emphasis has centered on being in the right spot that not enough players know what to do when they get there, or even why they're supposed to be there in the first place.

That might explain the apparent hesitancy across the board from Nebraska's defense Saturday, even though much of Minnesota's success came on plays that the Huskers had worked on during the two weeks prior.

What?s the top strength of Wisconsin receivers? Blocking, so says Jeff Potrykus of the Milwaukee Journal Sentinel. Tell me you aren?t surprised. Please.

Although no one wide receiver has emerged to complement senior Jared Abbrederis, who has 43 of the team's 115 receptions and 752 of the team's 1,517 receiving yards, Beatty cannot complain about the blocking.

Redshirt sophomore Jordan Fredrick and Abbrederis have excelled at the skill and will play key roles in UW's ability to run the ball when the face host Iowa.

The Nittany Lions have yielded 40 or more points in each of the last three games. Still, it?s tough to blame Butler. His troops are depleted. Butler is a bright mind and an intense coach. Fans need to relax.

Didn't realize this before – Ameer Abdullah leads the Big Ten in total yards per game with 160.6. #Huskers

My take: He is having a quietly good season.

RKIII's message to T-Mart: "Basically keep his head in the game. I don?t want him to feel like he?s being left out. Because we need him."

My take: Ron Kellogg III is a great leader. Period. End of story.

My take: Sounds like one team has an edge in the ground game over the other.

Ohio State's much-maligned defense: Ranked No. 14 in the country in total defense and No. 15 in scoring defense. #Buckeyes #SilverBullets

My take: So, I guess the defense isn?t so bad, huh?

For now, my story on Eddie George saying Urban Meyer was the "only guy" who could have saved Ohio State http://t.co/fY9nVrMGxx

My take: Yes, Urban Meyer is good. But I doubt he?s the only one who could have saved OSU.

Re-watching OSU-PSU. Nittany Lions look much more lethargic on TV than they did live

Love reading opinions on Meyer "running up the score" on Penn State. 2005 Penn State team put 56 on Illinois in the first half.