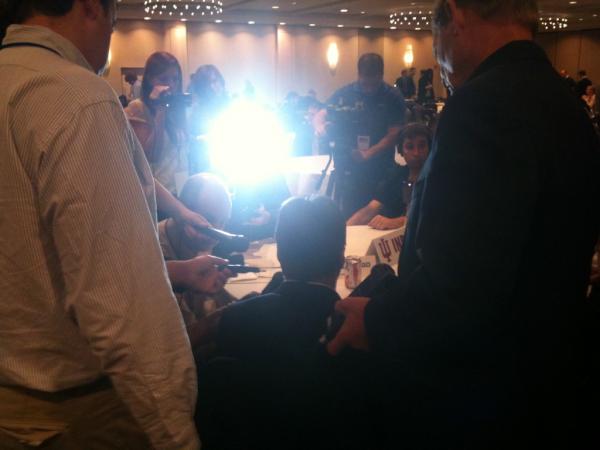 CHICAGO - With basketball season around the corner, BTN will cover the nation?s best basketball conference like no other network, with live coverage of media day, season-long pregame and postgame shows and studio and original programs, including the return of BTN?s Emmy-Nominated original series, The Journey: Big Ten Basketball 2014.

On Thursday, BTN will provide live television and streamed coverage of the Big Ten?s 2013 Basketball Media Day. For the first time, BTN and BTN2Go will provide live coverage of the men?s coaches? press conferences, while both the men?s and women?s coaches? press conferences will be streamed live, free of charge, on BTN.com via the Big Ten Digital Network (BTDN). Mike Hall will be in-studio hosting the day?s coverage beginning at 9 a.m. ET.

BTN will televise 67 men?s conference basketball matchups this season, including four Big Ten Tournament games and an additional number of non-conference games. BTN?s ?Super Wednesday? lineup, sponsored by Buffalo Wild Wings, will feature key matchups all season long. In addition, the network will have games on Tuesdays and Thursdays, presented by Quicken Loans, and frequent doubleheaders on Saturdays and Sundays. Additionally, The Big Ten Tip-Off Show airs game days on Wednesdays and Saturdays and The Big Ten Finale airs on Tuesdays, Wednesdays and Saturdays during the season.

About BTN:
A joint venture between the Big Ten Conference and Fox Networks, BTN is the first internationally distributed network dedicated to covering one of the premier collegiate conferences in the country. With more than 800 events, all in HD, the 24/7 network is the ultimate destination for Big Ten fans and alumni across the country, allowing them to see their favorite teams, regardless of where they live. Events include football, men?s and women?s basketball games; dozens of Big Ten Championship events; studio shows; coaches? shows; and classic games. The network televises and streams more Olympic sporting events and women?s sports than has ever been aired on any other network. Original programming highlights activities and accomplishments of some of the nation?s finest universities. The groundbreaking Student U initiative provides real-world experience for students interested in careers in sports television. The network is available to more than 80 million homes across the United States and Canada, and currently has agreements with more than 300 affiliates, including AT&T U-Verse, Atlantic Broadband, Cablevision, Charter, Comcast, Cox, DirecTV, DISH Network, Insight, Mediacom, Rogers Cable (Canada), Shaw Cable and Shaw Direct (Canada), Time Warner Cable and Verizon FiOS. For additional information, go to www.BTN.com.