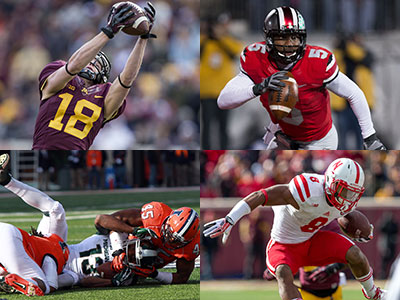 Week 9 of the college football season was filled with a little bit of everything. We had upsets, blowouts and plenty of top plays. Minnesota had a memorable 34-23 upset victory over Nebraska, making the Gophers bowl eligible. Iowa edged out Northwestern in overtime, while both Michigan State and Ohio State cruised to blowout wins over Illinois and Penn State, respectively.

Through nine weeks, Ohio State remains the only unbeaten team in the conference. With that said, let's dig deep into the twitterverse and pull the best plays and tweets from athletes, coaches and reporters around the Big Ten.

Did I miss something? Tweet it to me at @BTNSean.

Braxton Miller is making Devin Gardner look like the JV quarterback. Tonight is the varsity game.

We are seeing the fully weaponized Braxton Miller we've imagined for so long. (Pryor never got there.)

ICYMI: #Spartans Isaiah Lewis had a tremendous INT right before the half that kind of went unnoticed. WATCH – http://t.co/cCN2m6AXX8

That's a top-10 play we're not going to see again. RT @MikeWScout: Uh. So that interception by Isaiah Lewis was decent.

3. Ameer Abdullah hurdles a Minnesota defender and runs for 22 yards:

Ameer Abdullah is a pure back! #FeedHim

Have to say this though: Ameer Abdullah is a heckuva player. Nineteen yards from 1,000 already. #Huskers

Let's gooooo! RT @GopherSports: WOW! What a catch by Derrick Engel on 4th down! Touchdown #Gophers!!

Them gophers going to work! Finish strong and this will be a HUGE win for them!!

Nelson throws an absolute STRIKE to Derrick Engel on 4th and 11 for the TOUCHDOWN!! Amazing throw and catch! #Gophers lead 14-10! Ski-U-Mah!

That MSU TD was a bad pass turned into a miraculous catch by Bennie Fowler. Unreal