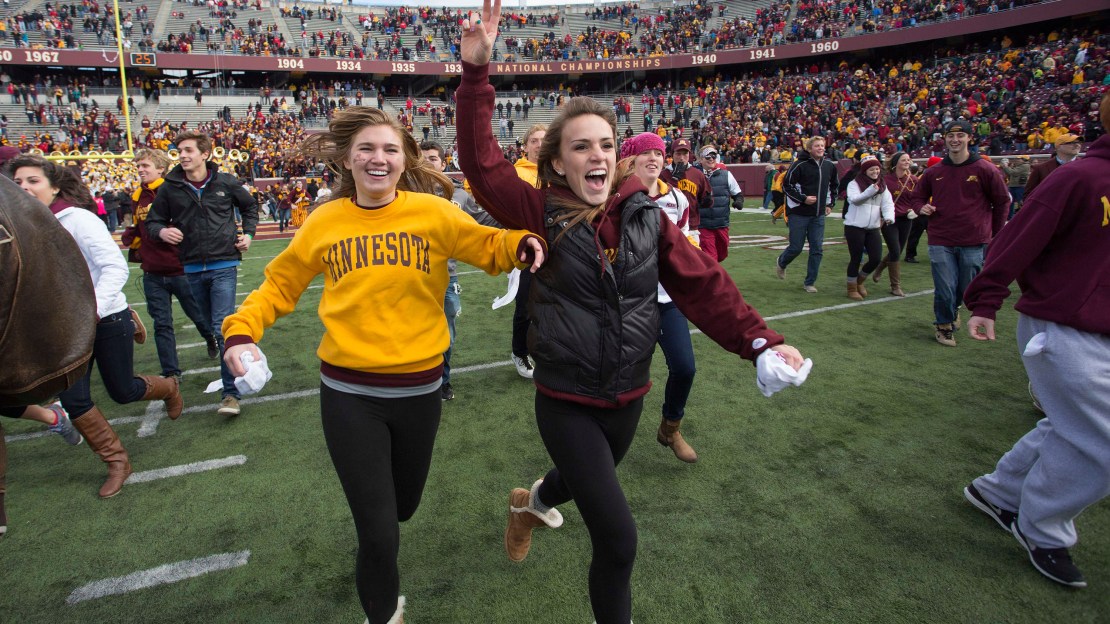 With just four games, it was an abbreviated week of action in the Big Ten. But there was no shortage of excitement. A big revelation: Michigan State looks like the class of the Legends Division. Oh, and Ohio State sent a heck of a message by trouncing a Penn State team that was coming off a win vs. Michigan. Here is a wrap on Week Nine.

Biggest surprise: No one saw Minnesota dumping No. 14 Nebraska. But the Golden Gophers pulled the big upset, taking a 34-23 win. Minnesota did nothing fancy, relying on their physical ground game to over match a Huskers squad that was coming off a bye. The Gophers ran 54 times for 271 yards (5.0 ypc) en route to notching 430 yards. David Cobb led the way with 138 yards on 31 carries.

Biggest disappointment: Nebraska. The Cornhuskers were supposed to be primed for a big second half of the season that began with what looked like a winnable game at Minnesota. Alas, the Cornhuskers got whipped, suffering their first loss to the Golden Gophers since 1960. Offense? Defense? They both struggled, as Nebraska had just 328 yards of offense and allowed 430. NU got out to a 10-0 lead. Then, things fell apart, as the Cornhuskers were outscored 34-13 the rest of the way.

Best play: With less than 15 seconds to go in the half and Michigan State leading Illinois, 7-3, Spartan quarterback Connor Cook dropped to pass and quickly was flushed from the pocket. He spotted Bennie Fowler inside the Illinois 5-yard line and fired a dart. The pass was deflected into the air by an Illini defender and caught by Fowler, who fell into the end zone for a 29-yard touchdown toss to give MSU a 14-3 halftime edge. The wild play capped a 15-play 99-yard drive.

Play this again: Iowa 17, Northwestern 10 (OT). This wasn?t a classic, but it was a fun game that was a tale of two halves. The Hawkeyes got out to a 10-0 lead only to see the Wildcats win the second half, 10-0, to force overtime. It also essentially was a must-win game for both team?s bowl hopes. Iowa is sitting pretty. Northwestern? Not so much so.

Never play this again: Michigan State 42, Illinois 3. Yes, Ohio State?s 63-14 whipping of Penn State was brutal. But, let?s go with the Spartans? demolition of Illinois. The Fighting Illini actually took a 3-0 lead-then saw the Spartans score the next 42 points. Michigan State dominated this game in every facet, notching 477 yards to Illinois? 128. MSU has 29 first downs to the Illini?s eight. Time of possession? 39:06 to 20:54 in favor of Michigan State. Get the point?

Connor Cook. Was this really the same quarterback who struggled last week in a 14-0 win vs. Purdue? Cook hit 15-of-16 passes for 208 yards and three touchdowns at Illinois. Against Purdue, Cook completed 13-of-25 passes for 107 yards and no touchdowns.

Minnesota. The Gophers? 34-23 win over No. 24 Nebraska made Minnesota bowl-eligible. The Golden Gophers have won two in a row, prevailing at Northwestern last week to end a two-game skid.

Ohio State BCS hopes. If style points matter, the Buckeyes scored a lot vs. Penn State. Will it help in the BCS standings?

Michigan State rush defense. Honestly, the entire defense was dominant at Illinois. But the Spartans rationed the Illini 25 yards rushing on 21 totes. MSU is the lone team in the nation that has yet to allow a 100-yard rusher.

Jake Rudock. He was OK vs. Northwestern, completing 19-of-27 passes for 169 yards. But his touchdown lob to C.J. Fiedorowicz in overtime was a sign of maturation, as Rudock stood in vs. a fierce blitz and dropped the winning score to his tight end.

Tracy Claeys. The Minnesota acting head coach and defensive coordinator is proving to be a quick-study and steady hand with Jerry Kill away tending to his health.

Illinois? Big Ten losing skid. It?s now at 17 in a row with no end in sight. The best chance: Nov. 23 at Purdue. Will the Illini be favored in West Lafayette?

Jeremy Langford. That?s three 100-yard rushing games in a row for Langford, who ran 22 times for 104 yards and two touchdowns at Illinois. The last three games, Langford has rushed 69 times for 344 yards and five touchdowns.

Delton Williams. The Michigan State true freshman running back continues to emerge, running five times for 78 yards and a score at Illinois.

VIDEO: You have to see this TD run from @MSU_Football's Delton Williams. #orvillemoment WATCH – http://t.co/yEayd7Q9Xd

Kain Colter. The Northwestern quarterback played well in his return from an ankle injury, hitting 11-of-14 passes for 104 yards and a touchdown. He also ran 18 times for 60 yards. No doubt, NU?s attack is much better when he?s taking snaps.

Ameer Abdullah. The Nebraska back did his part, running 19 times for 165 yards. But, it wasn?t enough.

Nebraska. What?s next for the Cornhuskers (5-2, 2-1) after a stunning loss at Minnesota? Nebraska still has games vs. Northwestern, at Michigan, vs. Michigan State, at Penn State and vs. Iowa.

Iowa rush defense. It was No. 5 in the Big Ten (114.9 ypg) entering the weekend. But the unit was ripped for 225 yards by Northwestern.

Northwestern bowl hopes. A 4-0 start has melted into a 4-4 reality after a 17-10 overtime loss at Iowa. And the Wildcats still have games left at Nebraska, vs. Michigan, vs. Michigan State and at Illinois.

Illinois offense. This was the strong point of the Illini squad. Well, vs. the Spartans, Illinois was limited to 128 yards and three points.

Hawkeye offense. Yes, Iowa got the win over Northwestern, but the offense took a step back. The Hawkeyes had just 305 yards and no second-half points vs. a Wildcats defense that had been struggling of late.

Taylor Martinez. There was no appearance by ?T-Magic? at Minnesota. He looked rusty after missing three games, hitting 16-of-30 passes for 139 yards with a touchdown and pick. He also ran eight times for just 16 yards. It wasn?t a grand return.

A full week of Big Ten action, with all 12 teams suited up. The last time all 12 teams played on the same weekend? Sept. 14. Without a doubt, the top game is Michigan at Michigan State. The Spartans need no motivation vs. Michigan. Before losing, 12-10, last year in Ann Arbor, Michigan State had won four in a row in this oh-so-heated rivalry. Before the Spartans ripped off four wins in succession from 2008-11, the Wolverines won six in a row from 2002-07.