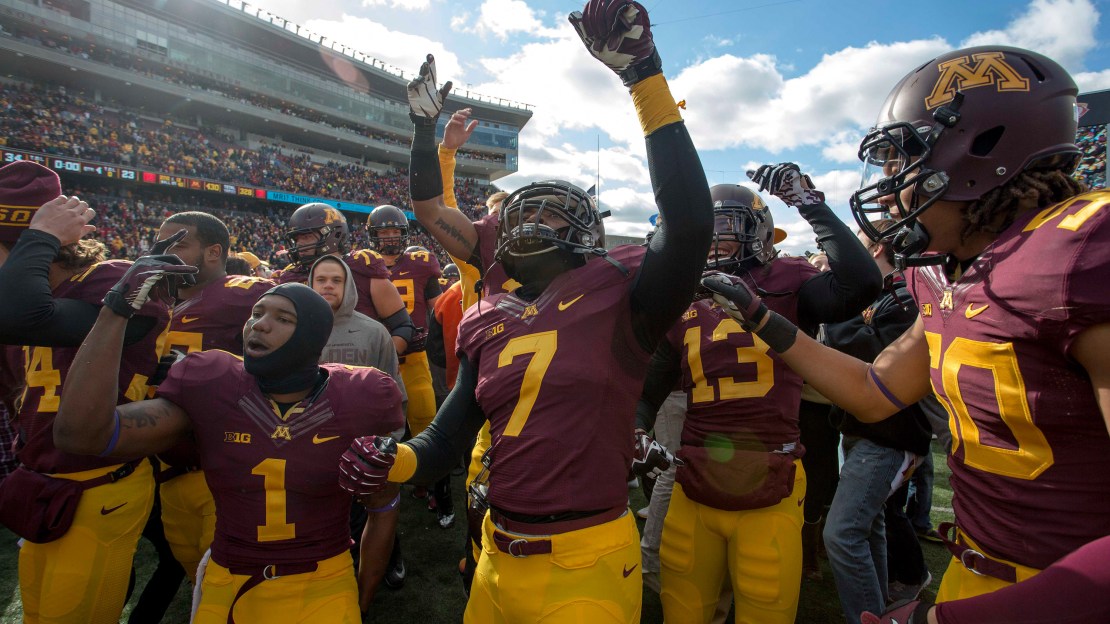 This was a program-defining win for Minnesota under Jerry Kill's watch. But really, it was much more than that. The Golden Gophers? 34-23 upset victory over No. 24 Nebraska was a testament to the foundation that Kill has laid since arriving in the Twin Cities in 2011. It also embodied the toughness Kill possesses as a coach and in his fight to control his epilepsy.

His players don?t want to let him down while he?s away dealing with his health issues. They want to make him proud. And, they did that today. It?s just too bad that Kill wasn?t on the sidelines to enjoy it. But, no doubt, his influence and spirit continue to permeate this Golden Gophers? team-his Golden Gophers? team, which he watched from the press box for a second game in a row.

"I think this victory says a lot about our kids,? said acting head coach and defensive coordinator Tracy Claeys. ?We talked about how Nebraska had two weeks to prepare and we're not sure what we're going to see from the other team, and Nebraska came out right away and got after us. Our kids kept staying positive, though and we moved the ball while taking some time off the clock and allowing the defense to regroup. I told the team to play hard and do their job and when they look up in the fourth quarter they're going to have an opportunity to win and sure enough we did."

Claeys follows the script that Kill laid out years ago, back to 1995 when Claeys first joined Kill at Saginaw Valley State. It?s a script that works, Claeys knows it. Offensive coordinator Matt Limegrover knows it. That?s why the staff didn?t waver when Nebraska had the ball late and trailed just 27-23. Minnesota?s defense made the stops, and the offense did its job by delivering a game-sealing 1-yard touchdown run by quarterback Philip Nelson with 48 seconds left en route to a domination of Nebraska.

The Gophers fell behind 10-0 but slowly found their groove. Look at the numbers: Minnesota had 430 yards to Nebraska?s 328. And the Gophers had their way with the Husker defense on the ground, rushing 54 times for 271 yards, even though everyone in TCF Bank Stadium knew Minnesota was going to run the ball.

David Cobb led the way by running 19 times for 165 yards for a Minnesota that had lost 16 in a row to the Cornhuskers, last beating Nebraska in 1960. The pass? The Gophers attempted just 17, completing eight. It didn?t matter.

"We were able to stay committed to the run,? said Claeys. ?There were some times when we didn't get more than a yard or two, but David Cobb had some great runs that gave us a big spark."

The Gophers are suddenly confident, winners of two in a row after taking a 20-17 win at Northwestern the week before. It?s quite a turnaround. Minnesota started 4-0, then lost to Iowa and at Michigan, as Kill stepped aside to deal with his health issues. No one knew how the players would respond. Would things fall apart?

Nope. The team is thriving, rallying around Kill?s spirit and is inspired to carry on in his absence. When will Kill be back? Hopefully soon. But, until then, it?s comforting for the Gophers to know this team isn?t just surviving-but it?s thriving sans its leader, who spoke to the team at halftime.

?He just said to keep doing what we were doing because we came out in the first half fired up so they didn?t really want us to change too much,? said Minnesota receiver Derrick Engel. ?Keep playing hard and playing our game ? not trying to do too much but just go play by play and give 100 percent. That?s what we did and I think the results speak for themselves.?

Minnesota is 6-2 overall and 2-2 in the Big Ten, already bowl-eligible but thinking about so much more. Up next is a game at Indiana followed by visits from Penn State and Wisconsin with a season-ending trip to Michigan State. How many wins can the Gophers? notch? How high can they go? The possibilities seem limitless.

Nebraska can?t say that. To say that the Cornhuskers are at a crossroads would be a massive understatement. The loss today at Minnesota was the nadir of the program under Pelini. This staff has been unable to plug leaks in the defense for over a year and half. Ask any Husker fan, and they?ll be able to recite details of the three epic meltdowns last season.

It was brutal. And, at times, it was embarrassing for the Huskers, especially the loss to the Badgers in the league title game when it often looked like Wisconsin could run any play it wanted and gain big yards.

In the offseason, the Nebraska staff talked about how the defensive issues would be solved, about how progress was being made. Some felt the injection of new, young players would help. But, when the 2013 season dawned, the Cornhusker defense looked similar to what it did last season.

Alarms were sounded after a 37-34 season-opening  win over Wyoming that saw Nebraska allow 602 yards.

An awful 41-21 home loss to UCLA caused even more rumblings, as the Bruins roared back from a 21-10 halftime hole en route to notching 504 yards.

Shortly thereafter, a salacious recording of Pelini ripping fans back in 2011 was released, causing an uproar across the state.

Now, this loss at Minnesota is the latest body blow for the Husker program.

The Cornhuskers are now 5-2 overall and 2-1 in the Big Ten. Yes, they are still in the Legends Division race. But, Nebraska will have an uphill climb. A struggling-but-desperate Northwestern team comes to Lincoln next week. Then there is a trip to Michigan, a visit from Michigan State, a trip to Penn State and visit from Iowa. The Huskers could lose as many four of those games.

The offense doesn?t get off the hook in today?s loss at Minnesota. Taylor Martinez missed the last three games dealing with a turf toe injury. He hadn?t played since the UCLA game on Sept. 14. And, it showed. Martinez hit just 16-of-30 passes for 139 yards with a touchdown and interception. He ran eight times for 16 yards. T-Magic made no appearances on this day.