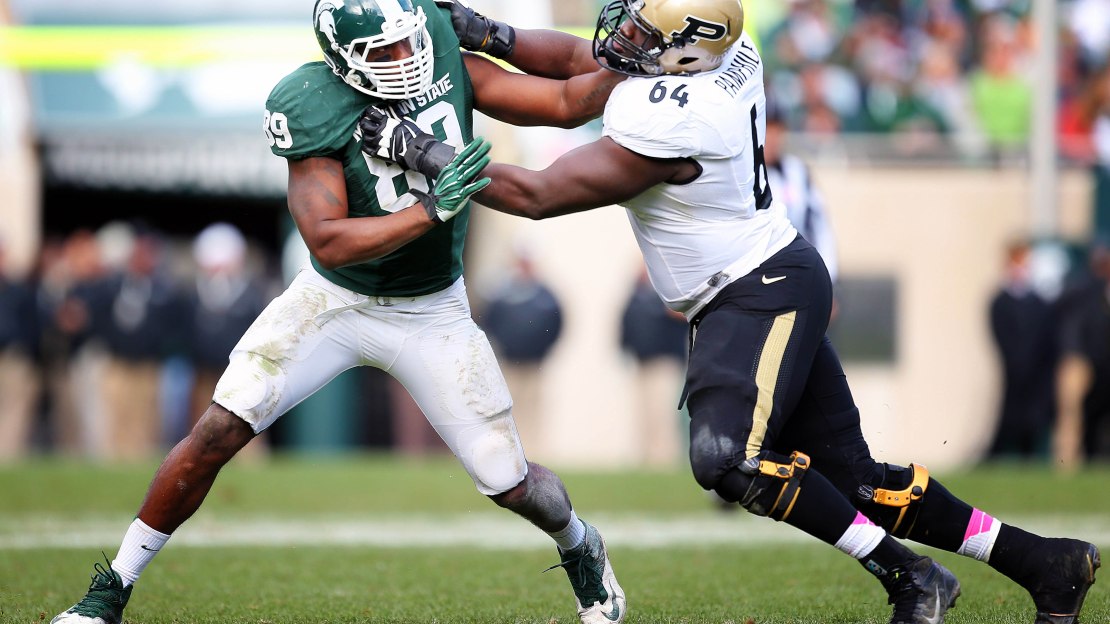 Here is an interesting place to start today?s daily links. The great Mike Griffith of Mlive.com has five alarming things we don?t know about this Michigan State team. Griffith?s most revealing item: Is the Michigan State defense a paper tiger? Interesting.

Check out his take:

Purdue ran the ball down Michigan State's throat on its opening drive last Saturday. The defense adjusted, but not before we saw the Spartans get knocked off the ball by arguably the worst rushing attack in the Big Ten. What will happen against a quality run attack? Nebraska, anyone?

Then, the secondary. We all saw what happened against Notre Dame - the only decent, balanced offense the Spartans have played this season. A couple of the pass interference calls on the cornerbacks were questionable against the Irish, yes. But a couple of them weren't.

The schedule is starting to get tougher. Stay tuned.

If you didn?t already know this, Nebraska?s reputation isn?t what it used to be. Sam McKewon of the Omaha World-Herald deftly explains in this story. And, I think he?s correct. The Nebraska brand doesn?t buy the school the benefit of the doubt, especially when it comes to pollsters.

He sums the Huskers? plight well here: ?Reputations are built through results, not romance. The Huskers have to win often, win big, and help redeem the Big Ten, because league membership points aren't going for much on the ratings market.?

?There's no question that's a big part of it,? Hoke said. ?The threat that Devin is vertically down the field, I don't think there's any doubt that he had a lot of attention from Indiana and their secondary. That in turn obviously helps Jeremy.?

?I?ve got close, but never,? Gallon said. ?I do it myself in the video game but I never imagined myself doing it in real life. It?s a lot more fun.?

It seems Urban Meyer isn?t pleased with Bradley Roby?s ejection from the Iowa game for targeting. He says ?everybody is going to want to re-look at that rule.?

"That was not the intent of the rule," Meyer said. "That play ?? I can say that without, I'm sure, getting in trouble. That rule was not put for that play. ? We teach them to get your pads down, hit with your shoulder pads."

So, there is that. Honestly, I felt more players would have been booted from games thus far. Oh, and I think Roby?s hit merited ejection from what I learned at the official?s clinic this summer.

"I didn't think it warranted an ejection at all." – @howardgriffith, on Bradley Roby's hit. WATCH – http://t.co/X2ZQAc1N5J

On the subject of targeting, Nebraska receiver Kenny Bell isn?t a fan of the new penalty for the infraction.

"You celebrate a good play in football," Bell said. "They're just trashing the game. It's sad. It really is sad. You hit someone too hard now, you're going to get a penalty. You could be ejected. It's embarrassing.

"We signed up to play football," he said. "We know exactly what we signed up to do. And for Stanley (Jean-Baptiste) to get ejected over that (hit), it blows my mind. It's really disappointing."

Iowa?s task of topping Northwestern got more difficult when the Wildcats released this week?s depth chart listing Kain Colter as the starting quarterback. He missed last week?s loss to Minnesota.

However, running back Venric Mark still is out with an ankle injury. Colter and Mark combined to rush for 328 yards in Northwestern?s 28-17 victory against Iowa last season.

?We?re not being successful enough on offense right now for us to win,? Pat Fitzgerald said. ?If guys don?t show us consistent effort and improvement this week, we?re going to start rotating guys at different positions.?

So, what are the problems? This story identifies three areas: Trevor Siemian?s awareness, the offensive line and drops by the receivers. So what does all of this mean? The gang at InsideNorthwestern.com says two weeks ago, people were talking about NU playing in the Rose Bowl. Now, bowl eligibility doesn?t seem like a guarantee.

Bob Flounders of Pennlive.com has another edition of Penn State Numerology 101.

My favorite number: 0. Punts by the Buckeyes in their 34-24 win over Iowa Saturday in Columbus. Braxton Miller & Co. amassed 30 first downs, 495 total yards and Ohio State kept the ball for 35 minutes.

Kenny Bell said he and Enunwa watch film of Wisconsin WR Jared Abbrederis all the time: "He's the best to do it in the Big Ten." #Huskers

My take: Some big respect.

Have an MSU fan telling me today Michigan 'ran up the score' vs Indiana late, while MSU 'took a knee' to keep it classy vs Purdue.

MSU basketball media day pushed back a day to Tuesday. The power of Leyland.

My take: This was a bit of surprise. Should MSU hoops get bumped by the retirement of a manager who never even won a World Series?

#illini Beckman: We have to play youngs guys. We won't sit them.

My thoughts on cheating? If you KNOWINGLY CHEAT..you are BANNED from coaching in NCAA Athletics..5 game suspension?? My backside..BANNED!!