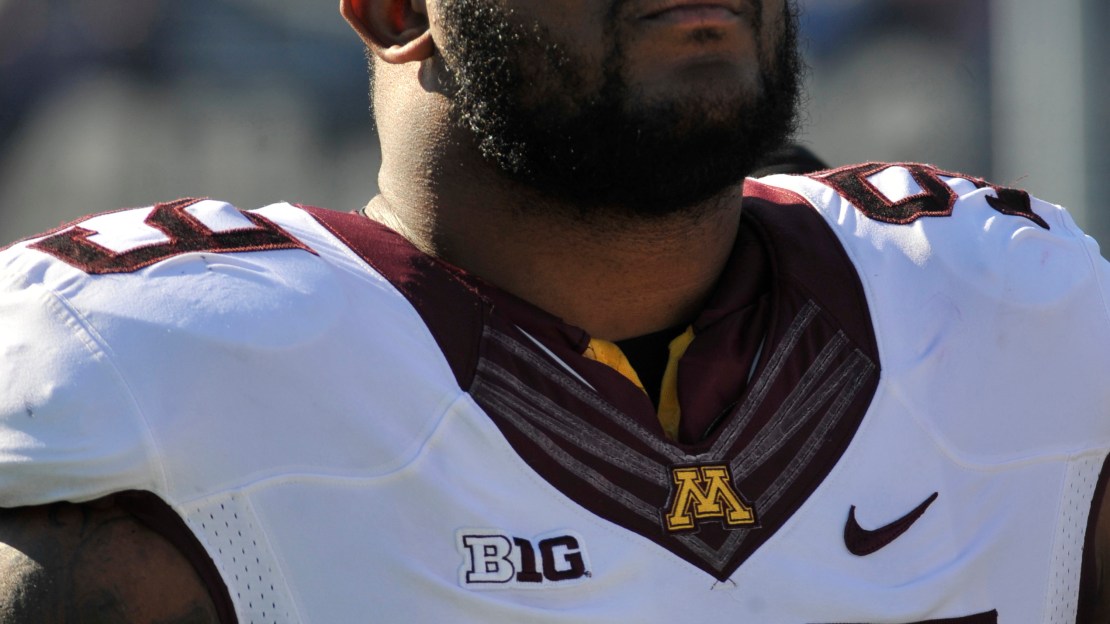 Ra?Shede Hageman arrived at Minnesota in 2009 as a tight end, fighting for a place to fit in on Tim Brewster?s roster. Now, the 6-6, 311-pound senior has become arguably the best defensive tackle in the Big Ten under a new regime in the Twin Cities.

Hageman began to emerge in 2011, when he recorded 13 tackles (10 solo, three assisted) with four tackles for loss, including two sacks and forced one fumble. Last season, Hageman notched 35 tackles and was second on the team with 6.0 sacks en route to being named honorable mention All-Big Ten by the media.

This season, Hageman is continuing to make plays. In fact, the fifth-year senior is coming off one of the best games of his career last week, when he picked off a pass and knocked down three others in a big 20-17 win at Northwestern. For the year, Hageman has 24 tackles, 6.5 tackles for loss, has batted down six passes, blocked a field goal and blocked an extra point. He has just one sack, but the big fella has been dealing with constant double-teams.

I caught up with Hageman, a product of Washburn High in Minneapolis, as he and Minnesota (5-2 overall; 1-2 Big Ten) prepped for a big game vs. Nebraska.

Q: Was the game at Northwestern last Saturday one of the better efforts of your career?
A: I would say so. Up until that point, I really wasn?t making a lot of plays in the backfield. I tried to do what I could as far as swatting down balls. And I got my first interception. I was just trying to find ways to help the team win.

Q: Has there been a reason why you were struggling to make big plays?
A: The fact I get double-teamed a lot gets to me. But double-teams are part of the game, so I strive to make as many plays as I can. Some games, it just might not work out, so I have to find other ways to make plays. It takes a toll on me. Last year, I had six sacks. This year, I only have one. I can?t be selfish. I just have to find other ways to be productive.

Q: Is there anyone who you pattern your style of play after?
A: I don?t usually watch a lot of NFL players, but the one who sticks out to me is Ndamukong Suh. He?s just a beast. J.J. Watt, too. I mix those two and use them to enhance my game. Watt is so quick, is a good pass rusher and swats balls, too. Suh is just a beast. He?s super strong, and I just feed off of that.

Q: How close did you come to turning pro after last year?
A: The only thing that stopped me from turning pro was the fact I didn?t have my degree. I think I would have regretted leaving without my degree. At the end of the day, you know how valuable a degree is. And last year was only my second year really playing d-tackle and I felt like I had a lot more work to do. I want to be fundamentally sound before I head to the next level.

Q: Who is the best blocker you have faced?
A: I have to give props to No. 77 for Michigan, Taylor Lewan. He?s tough. He?s fundamentally sound. It was tough to get off him. I?m not trying to brag, but one-on-one blocks aren?t usually an issue. It?s the double-teams. But Lewan is good.

Q: You battle your o-linemen in practice often. Who are some of better offensive linemen on your team?
A: Jon Christenson. He?s our center. He has that high motor. Sometimes I hate it because he?s always going 100 percent, but that helps me. And Josh Campion at left tackle, he?s tough, too, especially in pass blocking. But the entire o-line goes 100 percent in practice to make me and the other linemen better. But those two definitely stick out.

Q: What?s it like not having Coach Kill around?
A: Coach Kill is a tough guy. He would want us to keep moving forward. Just the fact we don?t have that voice and that whistle always ringing in practice and him screaming seems strange. But at the end of the day, you know why you?re here. Coach Kill is taking care of himself to get back with us. It?s hard to get used to, but we know he wants us to keep doing what we?re doing.

Q: What?s your best pass-rush move?
A: My one-hand stab. I do a lot of stutter-steps to get the o-linemen off guard. But pretty much just a bull rush with a one-armed stab creates separation and drives them back and creates pressure on the quarterback. I have more moves but not a lot of names for them now. But I feel like I?m really perfecting the one-arm stab. That really helps to get me where I need to go.

Q: How did you switch from tight end to defensive tackle?
A: This is a funny story. It was my freshman year and Derek Lewis was the tight ends coach. We were doing drills in camp, and I had three or four tight ends in front of me. So, my self-esteem already was down because I didn?t think I was going to play. I was being distracted watching the o-line and d-line work out during a practice. Coach Lewis saw me, yelled at me and winked. I knew right there, he knew what to do. After practice, he introduced me to the d-line coach. Coach Lewis told him he thought I?d be more productive on d-line. He read my mind. It was something I always wanted to do. I was a d-end in high school. At that moment, Coach Lewis knew what I wanted to do. Defense is so aggressive and so am I.

Q: Do you miss catching the ball?
A: I was a tight end my whole life. Watching the previous tight ends makes me a little jealous. But at the same time, I?m glad defensive tackle chose me. I still can catch the ball. I still have soft hands. I had that pick vs. Northwestern.