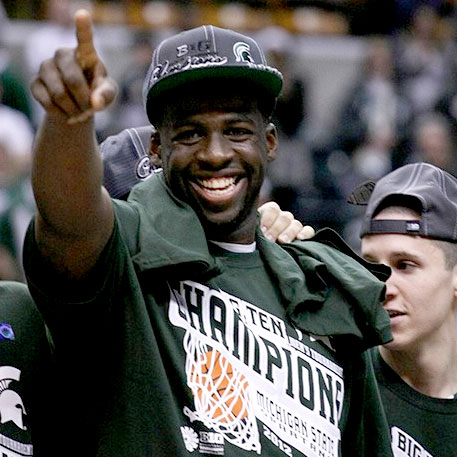 Coming off a 27-9 season, expectations are extremely high for the 2013-14 Michigan State men's basketball team. Tom Izzo's club returns four starters this year, including reigning Big Ten Freshman of the Year Gary Harris, who is picked by many to be the conference Player of the Year this season.

The last Spartan to be named Big Ten Player of the Year? Draymond Green.

The former All-American had a standout four year career for the Spartans, leading the program to two Final Four appearances and a Big Ten Championship in 2012.

Green, now a member of the Golden State Warriors, finished his college career as one of three players in Michigan State history to record more than 1,000 points and 1,000 rebounds.

We asked our twitter followers to submit their best questions to Green as he prepares for his second season in the NBA.

@BTNSean: dayday, what would you say to a potential MSU basketball recruit to convince them to play for IZZO?

Green: It's hard to not want to play for a coach who is a proven winner. Coach Izzo wants you to reach your goals and live your dream just as much or more than you want to.

@BigTenNetwork would you take anyone over Ben Brust in the B1G if you need a 3 pointer with 10 seconds left in the game?

Green: Of course I think Gary Harris is the most clutch shooter in the Big Ten and possibly throughout the nation. He was 0-13 in a game last year and took a 3 with under 1 minute left in the game with no hesitation and nailed it… That's just one example!

@BigTenNetwork who's the best projected player of the upcoming season, and why? #B1G

Green: I think this team will have so many weapons as to where there's no need for anyone to really stand out like that. They all will stand out by the amount of wins and the success of the team. I think there will be about six-or-seven guys averaging or right around double figures.

@BigTenNetwork how did Tom Izzo prepare you for the NBA?

Green: Coach Izzo prepared me for the NBA by putting me in big game situations, and having me guard and play multiple positions. He prepared me mentally for the NBA on and off the court, and also turning me into a gym rat when I arrived on campus… Of course, that didn't happen overnight, but it was something that he was able to do.

@BigTenNetwork how was the transition between college basketball and the NBA?

Green: From a mental aspect, the transition wasn't that tough for me because of all the situations Coach Izzo put me in. The same can be said with playing in big games. However, the speed of the game and the schedule and travel was a HUGE adjustment.