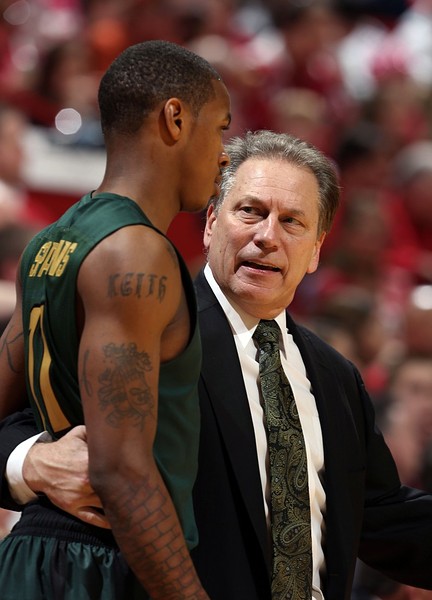 The release of the USA Today coaches poll is another indicator of how close we are to beginning basketball season. I was not shocked to see five Big Ten teams ranked in the new poll: 2. Michigan State, 9. Michigan, 10. Ohio State, 21. Wisconsin and 24. Indiana.

I thought Michigan State could have merited being the No. 1 team in the nation. Alas, Kentucky got that honor. But the Spartans are loaded with the likes of Gary Harris and Adreian Payne. They didn?t bypass the NBA draft to finish second. And don?t forget about Branden Dawson. Here are a few more thoughts.

No problem with Michigan at No. 9. Just imagine in Trey Burke and Tim Hardaway Jr., had come back. Heck, if anything, the Wolverines may be a bit underrated with Glenn Robinson III and Mitch McGary back along with a nice collection of newcomers, headed by Indiana Mr. Basketball Zak Irvin.

Ohio State is fine at No. 10, even without Deshaun Thomas. LaQuinton Ross looks primed to be a star for a deep team that will play good defense. And Aaron Craft is back. Enough said.

In some ways, I am a bit surprised to see Wisconsin in here. The Badgers annually seem to be underrated and ignored. And I thought that would happen again with massive frontcourt losses in Jared Berggren, Ryan Evans and Mike Bruesewitz. But, the coaches like Ben Brust, Sam Dekker and Co., and so do I. Remember: The Badgers have finished no worse than tied for fourth for 12 consecutive seasons.

My biggest beef: Where?s Iowa? The Hawkeyes finished fourth among ?others receiving votes,? which equates to a No. 29 ranking. (Illinois received two votes.) I think Iowa deserved to be in the poll, but I guess I can see where skepticism is warranted.

This is a program that hasn?t been to the Big Dance since 2006. Still, Iowa has five starters back led by Aaron White and Roy Devyn Marble. Plus, this is a hungry squad with something to prove.

No doubt, Indiana is getting a massive benefit of the doubt by appearing in this poll after losing four 1,000-point scorers. The stalwarts gone: Cody Zeller and Victor Oladipo. Yes, Indiana welcomes the most decorated collection of newcomers, led by Noah Vonleh. Still, Zeller and Oladipo were seasoned franchise players.

And the last time I saw Yogi Ferrell, he was getting blanked in the NCAA tourney by Temple and then Syracuse. I think IU has some growing pains in the early going. No way this team should be ranked and Iowa isn?t.