How many B1G stars made CBSSports' top 100 players? 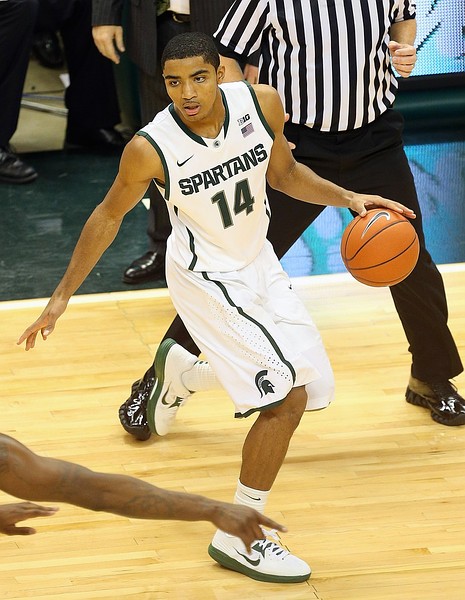 Thirteen Big Ten basketball stars land on CBSSports.com's recently released top 100 players of 2013-14. Michigan State's Gary Harris leads the way, at No. 7, while Ohio State's Aaron Craft comes in right behind Harris. That's it for the Big Ten as far as the top 10 goes, however Michigan's Mitch McGary is No. 11 to kick start the remaining 11 players.

For what it's worth, Michigan State put four players on the list, Michigan three, Indiana and Ohio State two, and Minnesota and Wisconsin one.

"Harris battled injuries most of last season and has done the same this preseason. But he should be healthy soon and good enough to become the Big Ten Player of the Year."

"One of the nation's premier defenders and leaders, Craft is ready to take on a bigger offensive role with Deshaun Thomas gone."

The sophomore big averaged 14.3 points and 10.7 boards in the NCAA tournament; can he do that consistently this regular season?

"Payne is a beast of a forward for Michigan State and said to be in great shape and ready to dominate the league. He plays taller than 6-9 because he gets above the rim on both ends."

"Robinson's NBA stock should be for the better after returning to school. He has a smooth stroke and a great pro body."

"Ross scored at least 17 points in his final three games last season. He will need to do that on a regular basis this year."

"The skilled sophomore started to hit his stride in Big Ten play; Dekker could breakout with the Badgers losing their entire frontcourt."

"There is opportunity for a freshman to blossom in Bloomington this season. The talented Vonleh is the best candidate to do so."

"Half of the unrelated all-Hollins backcourt, Andre can do a little of everything and will be asked to do more this season under first-year coach Richard Pitino."

"Dawson's scoring numbers took a hit in the second half of the season, but he's a terrific offensive rebounder."

"Stauskas won't be a third or fourth option on offensive anymore, not with Trey Burke and Tim Hardaway Jr. gone. He'll have a chance to show he's not just a 3-point shooter."

"Sheehey is Indiana's leading returning scorer and one of the few Hoosiers you'll actually recognize from last season's team that earned a No. 1 seed in the NCAA tournament."

"The Spartans need Appling to be better and more consistent than he was last season. If he is, Michigan State could win the national championship."

Quick thoughts: It's great to see LaQuinton Ross getting some love following his coming out party in the NCAA tourney. He's always had the talent, and now it will be fascinating to see how he handles the go-to-scorer role. I'm pretty sure Sam Dekker will be higher on this list should there be a postseason version. As for guys who are worthy recognition, how about Iowa's Devyn Marble, Penn State'sTim Frazier or Purdue's A.J. Hammons?