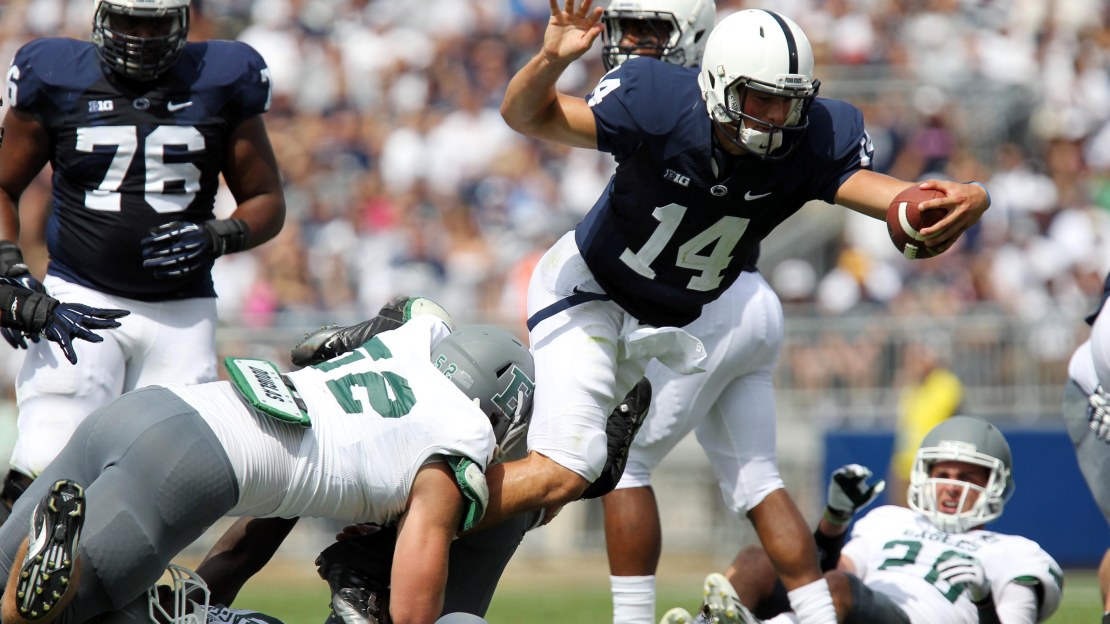 Happy Hump Day, America! There is a lot going on in the Big Ten as he turn the corner and head toward Saturday. Where to begin? How about right here with this pressing issue for Michigan defensive coordinator Greg Mattison: To blitz, or not to blitz Penn State freshman quarterback Christian Hackenberg. That?s the conundrum facing Mattison.

When in doubt, blitz. I don?t care what the name of the quarterback is, none of them do well with someone in their face. Plus, Hackenberg is just a freshman. And Penn State doesn?t seem to have many targets outside of Allen Robinson. So, go get Hackenberg, Mattison.

Penn State has its own issues. One is spotty defense. Linebacker Glenn Carson tries to explain what?s wrong with the Nittany Lions defense in this video.

Cleveland.com asks the question: Who is Ohio State?s MVP so far?

Is it Kenny Guiton? Philly Brown? Jack Mewhort? Really? This one is simple: It?s Guiton.

Mike Griffith of Mive.com tackles the MSU issue of the week: How can Michigan State fix its red zone issues?

Michigan State ranks tied for 59th in the nation in red zone offense, which ranks teams based on the percentage of times they score once they reach the red zone. The Spartans have reached the red zone 19 times this season and kicked eight field goals while scoring eight touchdowns. Griffith thinks taking the redshirt off bruising true freshman running back Delton Williams is a move to help MSU gain the tough yards in the red zone, which is a start to curing the red-zone blues.

The great Loren Tate of the Champaign News-Gazette thinks he knows what Illinois? issue is: The Illini need more beef in the trenches.

Tate says it takes muscle to win in the Big Ten. Mature, weight-trained muscle. Until the Illini can match that muscle, they?ll need magic tricks. Of course, Tate is correct. He always is. He?s Loren Tate.

There?s a lot to like about Ohio State?s 6-0 start. But the Buckeyes have work to do. In fact, Urban Meyer called the pass defense ?very alarming.?

The secondary has been shredded three times in six games. Part of the problem, an issue dating to 2011, is missed tackles. Meyer pointed out that two of Northwestern?s biggest gains Saturday were purely because of missed tackles.

Oh, and remember how Meyer said Kenny Guiton would play a bit in each game after Braxton Miller?s return from injury? Well, that hasn?t happened yet.

Meyer said the coaches are having conversations this week about how to incorporate Guiton into the game plan, though Meyer says knowing when to do it is difficult.

"It's very complicated when you take a quarterback out, when you put him back in," Meyer said. "I don't know."

Pat Harty of HawkCentral.com says the jury is still out on the Iowa offense.

There is enough evidence to show that Iowa is moving in the right direction compared to last season, but not enough for Iowa to avoid being an underdog in five of its last six games. The one exception: The Nov. 10 tilt at Purdue.

So, Iowa may never try to return a punt again? Really? This seems a bit extreme.

?I think if you pressed me today, I?d say we may never return a punt again,? Ferentz said during the Big Ten teleconference. ?Just because when you do that, to block guys you have to turn and go with those guys to shadow them.

?When you do that, you open the door. And Michigan State did a good job of taking advantage of that.?

The Hawkeyes have been burned by six fake punts since 2010. But Iowa did return two punts for touchdowns three weeks ago vs. Western Michigan.

Good to hear that Jerry Kill is doing well after his latest seizure. Hope to see him on the sidelines when Minnesota plays Northwestern following a bye this weekend.

Ohio State-Northwestern was the most-viewed non-NFL sporting event of the weekend. The telecast averaged 7,355,000 viewers.

My take: That?s a lot of eyeballs.

My take: I still get a feeling Miller is gonna get hurt again at some point. The question: How serious will it be?

Quinton Washington with the quote of the day on playing at Penn St: "You can't prepare for (the noise). I just feel bad for the offense."

My take: This will be a nice test to Devin Gardner.

Yes, Funchess will continue to work with the tight ends … for now. He's just too good (and Michigan too needy) for him to not split out.

My take: He is talented. But it is kind of amazing that Michigan must turn to a tight end for big plays on the edge.

Tim Beckman touched on it today; #Illini missing defensive difference-makers on the line. No pass rush, no turnovers. #dechr

My take: Beckman is exactly right.

Etling said more people are noticing him on campus. Thinks most view him "as a tall 8th grader" #purdue

My take: This is too funny. Like the self-deprecating humor.

#Purdue coach Darrell Hazell moving Bruce Gaston to end 'to get him away from all those double-team blocks' and 'create some problems.'

My take: That?s well and good. But who?s gonna protect the interior now?