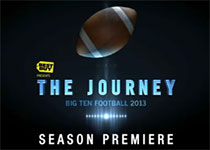 Everyone here at the network is really excited for the second season of The Journey: Big Ten Football to debut tonight. Last year?s debut season was really well-received and it even won a few awards, including the 2013 CableFax Award for Best Show - Sports, against some pretty stiff competition.

As a former Spartan, one with a Michigan alum for a brother and dozens of friends with Big Ten ties, I am a true fan of the show and look forward to watching week after week. As a PR professional for the network, I enjoy promoting each episode, and working with the entire Journey crew throughout the season.

I had the pleasure of talking to Coordinating Producer, BTN Originals, Bill Friedman earlier this week. He gave me some insight and creative background surrounding this season and what fans can expect.

Tina – What makes The Journey: Big Ten Football different than other football shows on television?

Bill – There are certainly a number of football shows on television. I feel that our team does a great job of focusing on how we want our show to look and feel and not get caught up in what other shows are doing.

First and foremost, we want The Journey to be real. That?s a word we often use to describe the show. There is no narration. All the narrative is told through the subject?s voice. We avoid ?portrait? or ?staged? shots (e.g. shots where subject looks directly at camera for dramatic effect). We pride ourselves on being able to make our show visually compelling by capturing footage as it happens, instead of directing someone to look tough or sad.

We emphasize cinematography - especially during games. We want the footage that we shoot to feel like a documentary film and not a television show. We also want to use our music effectively. One of the great parts of this series is that our theme song has become recognizable. Viewers expect to hear that song and we want the music to help brand the show.

When you put all those factors together, I think The Journey certainly has created its own vibe and soul, and as a result it has distinguished itself from many other similar shows in the genre.

Tina – What was your favorite moment from last season?

Bill – That?s a hard question, as I was very proud of all 10 shows we did last year. When I think back on last season, I think our Senior Day material from Penn State stands out to me. Given the unique circumstances surrounding the senior class at Penn State last year, compounded with the fact that the week prior Michael Mauti had torn his ACL, it really made our game treatment from that week stand out.

I?ll never forget the pure, raw happiness that we captured in the locker room after the game. To see how excited the team was when Bill O?Brien entered into the locker room. To hear them chant ?OB, OB, OB,? and then to see O?Brien let down his guard for just a moment and rush the pile in the center of the locker room, it was one of those special moments that I think is a hallmark of this series.

Tina – What can fans expect this season?

Bill – Every year, when the Journey team sits down to discuss the upcoming season, our primary goal is to provide Big Ten football fans with the best storytelling they can find on television.

We want to spotlight the people we feel are compelling characters in the Big Ten conference. Sometimes that means we profile star players, as we did last year with Denard Robinson, Michael Mauti, Braxton Miller and Montee Ball. Other times it means we profile those with fascinating background stories like the pieces we did last year on Minnesota?s Connor Cosgrove and Iowa?s Anthony Hitchens. Or we focus on the atmosphere around a big game.

This season, our expectations are to use our storytelling skills (interviews, cinematography, music, editing, etc.) to give Big Ten football fans a deeper understanding of the people and personalities that make the conference special.

The second season of The Journey: Big Ten Football, presented by Best Buy, debuts at 7 PM ET tonight on BTN.