Connor Cook: 'Of course we can' win Legends 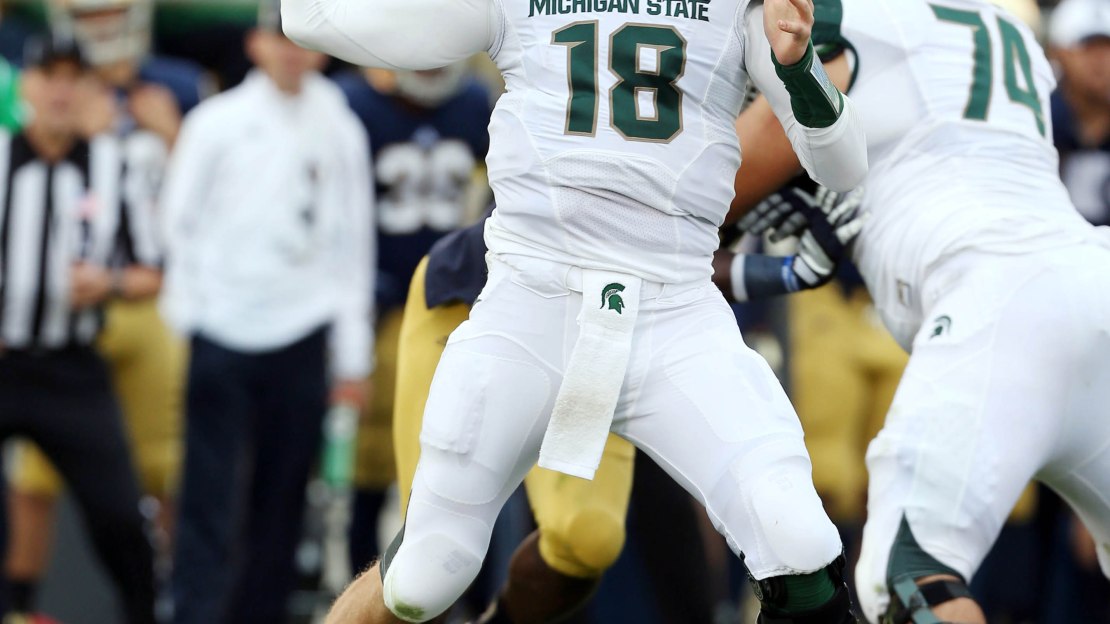 Connor Cook looks like the answer to the riddle that has been the Michigan State offense. The Spartan attack went in fits and starts to begin the 2013 season with senior Andrew Maxwell as the starting quarterback. The sluggish start saw the MSU coaches mix and match signal-callers until finally anointing Cook the starter in the third game of the season vs. Youngstown State.

In that game, Cook–who caught the attention of many when he came off the bench to rally MSU past TCU in the Buffalo Wild Wings Bowl last season–hit 15-of-22 passes for 202 yards and four touchdowns in a 55-17 triumph. But he was up and down at Notre Dame the next week, completing 16-of-32 passes for 135 yards and a touchdown. In fact, Cook was pulled in favor of Maxwell for a final desperation drive. The move failed in a 17-13 loss in South Bend.

Even worse: The move caused a stir among media and fans, and Cook also was miffed by the decision.

"I was a little disappointed, you know?" Cook said to reporters later. "I don't know why they pulled me. They said I was a little inaccurate, but I would have wished that the coaches had faith in me to keep me in there in a critical situation like that."

But Cook seemingly has the support of everyone now after making a strong statement in last week?s 26-14 win at Iowa. Cook hit 25-of-44 passes for a career-high 277 yards with two touchdowns and an interception.

The 6-4, 218-pound sophomore from Hinckley, Ohio, will look to take another step in his development this Saturday when Michigan State (4-1, 1-0) welcomes Indiana (3-2, 1-0) to East Lansing, Mich., in a battle for the Old Brass Spittoon.

I caught up with Cook as he prepped for the Hoosiers.

Q: What did that performance last week at Iowa do for your confidence?
A: It definitely elevated it, playing in an environment like that in Kinnick Stadium, playing in front of those fans and how loud they were and rowdy they were. That definitely boosted by confidence. But the whole team played great. The wideouts played great, the offensive line did an exceptional job blocking for me. It seemed like I had all day to pass. All of those things opened up the door for me to succeed. It was a good team win. Our defense played great. We played exceptionally well in special teams, too.

Q: Do you and sophomore wideout Macgarrett Kings Jr., have chemistry?
A: We are building off of our performances week by week. Ever since he came here, he worked with me a lot on the second team. We had some chemistry going on there. He?s just playing really, really good right now. He?s comfortable in our offense, he knows what we are doing. He?s just a great player to rely on. He?s not that big (5-10, 183), but he?ll go up and make plays.

Q: What part of your game is underappreciated?
A: My running ability. I think I showed good run ability the first couple of weeks than I have of late. But I don?t think people give me enough credit. I may look kinda slow with my long stride, but I am faster than you think.

Q: What?s your relationship with Andrew Maxwell like?
A: He has been a leader ever since I came here. Times when I needed help, he has been there with answers. When he was playing last year and would come off the field, we would talk about what he was seeing out there. The same thing is going on this year. He?s also giving out advice and eager to help.

Q: What?s your favorite play?
A: The one play that Macgarrett scored on (at Iowa), I was licking my chops. We had repped that play a lot during the week. And pretty much every time we ran it, it was just like that. I don?t want say what the play is called or how it works.

Q: What did it mean to your development to come in during the bowl game last season vs. TCU and rally the team to victory?
A: My coach gave me an opportunity to show what I could do. He put me out there in that critical two-minute situation and I did whatever I could to help my team win. I?m thankful for that opportunity because without that who knows what would be going on right now.

Q: Are you over the disappointment of being pulled late in the game at Notre Dame?
A: Oh, ya, that?s definitely over. We have put that behind us. We don?t really want to talk about that. It just showed that I?m a competitor and that I want to be out there to help my team.

Q: How is the running back situation developing?
A: I think they all are doing a great job. Jeremy Langford is a tough guy who has good hands and can catch the ball and get vertical. Nick Hill is a tough back who can take any hit and get right back up. Delton Williams, we pulled the redshirt off him. He did well for himself on the road at Iowa last week. He can break tackles. We are deep at running back and have a lot of guys who can be effective.