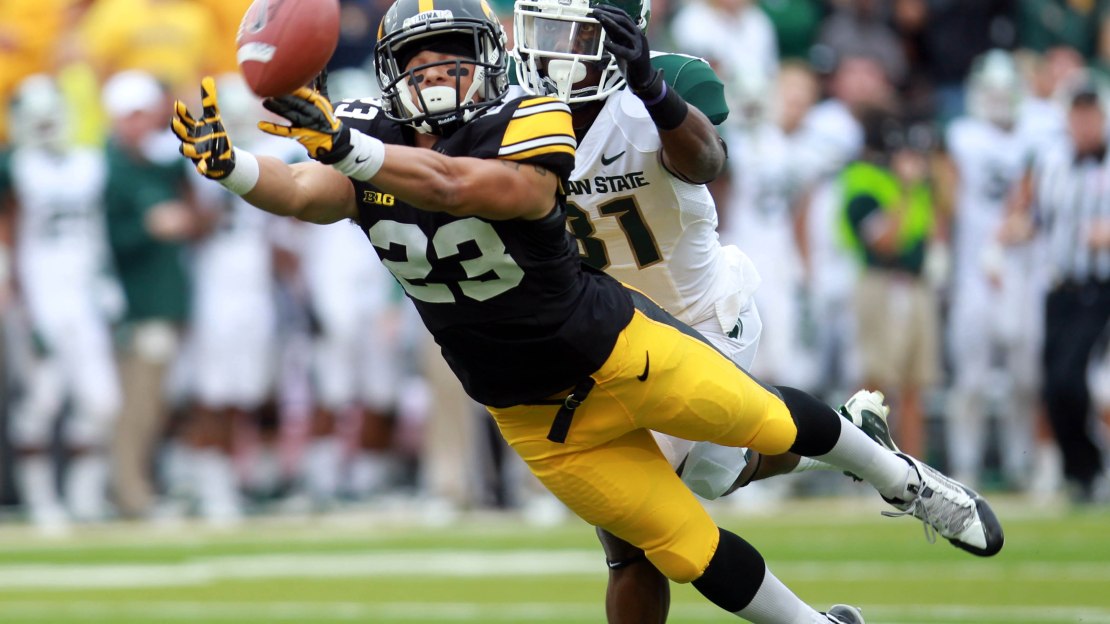 This should get your attention on a Tuesday morning in early October. Interesting meetings going on at Big Ten headquarters, where league officials and conference athletic directors are discussing a possible football federation.

Scott Dochterman of the Cedar Rapids Gazette says it?s possible the new football structure and rules could be voted upon at the annual NCAA convention Jan. 15-18, 2014 in San Diego.

?Northern Iowa and Iowa, for example, we might vote similarly for basketball, for wrestling,? Iowa A.D. Gary Barta said. ?But there might be certain things in the sport of football because of the size and scope of our programs, we need to vote a little differently. So we?re trying to figure out could we stay within the NCAA, stay as Division I but then just have some areas and most of them probably related to football, where there is more of a federated vote??

?Maybe there are some things where a school like Iowa might say yes on, and the Big Ten might say yes on, in order to keep this thing moving and all stay together, were we given that opportunity. I think there?s some open-mindedness to that.?

This train has left the station-and there?s no stopping it. I think without a doubt there will be a separate federation for football. Hey, the big boys always get what the big boys want. That?s just how life works, people.

Is Michigan a contender or a pretender? I know, it sort of a difficult question, isn?t it? We have seen good Michigan (Central Michigan, Notre Dame, Minnesota) and bad Michigan (Akron, UConn). Nick Baumgardner wrestles with the question.

I don?t think we?ll get a real read on this Wolverine team until it plays at Michigan State on Nov. 2. This week?s game vs. Penn State and the next vs. Indiana won?t tell us much about Michigan. So, stay tuned.

More Michigan: Sounds like there is a chance linebacker Jake Ryan could return to action from a knee injury suffered in March this Saturday at Penn State.

Anyone who watched Michigan last year saw that Ryan is the most productive defender the Wolverines have, playing at the strong-side linebacker position. So, it goes without saying, getting Ryan back would be a huge boost.

Another question for you: Could Penn State be looking at an 0-3 Big Ten start? Bob Flounders of Pennlive.com wonders. And, I think he may be on to something.

The struggles may just be starting for this shorthanded Nittany Lions club that?s coming off a mind-numbing 44-24 loss at Indiana. Up next: A visit from Michigan followed by a trip to Ohio State. PSU?s cause would be helped if it could generate more turnovers. Penn State has come away with only six turnovers in five games (five interceptions, one fumble). That is the second-lowest total in the league behind Illinois (five).

Ohio State is 6-0 and rolling. In fact, the Buckeyes may be favored in every remaining game. But will winning out be enough to get Ohio State into the BCS title game? Maybe not.

The Columbus Dispatch points out that Alabama thumped the worst team in FBS, Georgia State, and still controls its fate regarding the BCS title game. After that, it looks like the Pac-12 and ACC champions are next in line. It is becoming clear that Ohio State sits fourth in line right now.

So, bottom line: The Buckeyes have to win-out and hope there are myriad one-loss teams among the top conferences by early December. That?s lots of wishful thinking.

Yes, Iowa?s loss at home to Michigan State was disheartening. But, Andrew Logue of the Des Moines Register has six reasons why the Hawkeyes won?t crumble and go away this season.

The one area I like: The defensive front seven is stout. Logue notes that James Morris leads a linebacking trio that may be on par with any in the Big Ten. The tackles and ends continue to evolve as a formidable run-stuffing unit - with zero rushing touchdowns allowed.

Will that be enough to knock off the Buckeyes in two weeks? Probably not. But things are not as bleak as they appeared Saturday vs. Michigan State. Cheer up, Herky.

Everyone has someone in their life who has inspired them. Wisconsin?s players have written the names of those people on a team helmet that?s always is with the team. Pretty cool idea.

?I think it?s important to give credit to people who have helped you get where you are,? said Badgers quarterback Joel Stave.

The great Mike Griffith?s of Mlive.com is still jacked about the Spartans? win at Iowa. Here are five things he learned about MSU in the big victory.

Among the things Griffith?s learned: big freshman running back Delton Williams can help the MSU ground game that?s still looking for better production. No doubt, the Spartan passing game showed life vs. Iowa. But the search is still on for steady production from the ground game. Could Williams really be an answer?

Purdue true freshman Danny Etling will make his first start when Nebraska comes to Ross-Ade Stadium on Saturday. It will be the culmination of a life-long dream for the Terre Haute, Ind., native.

No doubt, Etling offers hope in West Lafayette. And that?s needed more than anything right now for a floundering team.

No #PennState practice availability again this week. I guess after losing to Indiana they don't wanna expose us to any potential flaws….

Penn State fans: How much do sanctions get O'Brien off the hook for losses? What if team struggles against Illionis/Minn/Purdue?

Wisconsin doesn't face Michigan State, Michigan or Nebraska. That is insane. It's like Glen Mason made the conference slate.

My take: A favorable slate.

Just remember, "The People" wanted a playoff, so this controversial committee comes with it. #BCSworked

My take: It?s always something, isn?t it?

Nebraska gave up at least 2 sacks in 11 games last year. Happened just once this year and NU hasn't allowed a sack in its other 4 games.

Northwestern looked like class of the Legends Division Saturday, yet is about to fall to 0-2. UW is better both offensively and defensively.

My take: Not sure if Wisconsin is better offensively than Northwestern. But I think it is on defense.

Bo Pelini said QB Taylor Martinez remains day to day. "I think he can run full speed. But can he get to full speed in a hurry?" #Huskers

My take: If I am Nebraska, I don?t play Martinez at Purdue.

#Gophers AD Norwood Teague told @washingtonpost about coach Jerry Kill: ?We all want him to coach here for a long time."