OSU-Northwestern game was one to remember 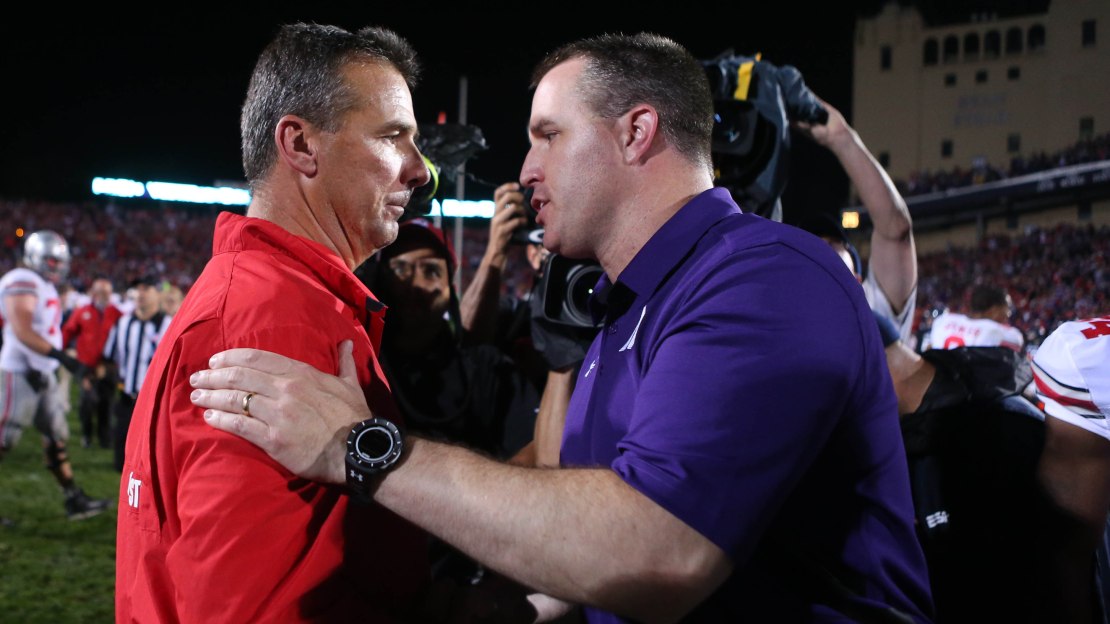 Carlos Hyde took the handoff, he broke a tackle, the chains moved. Another handoff, same result. Another handoff, a burst to the outside, another broken tackle – and this time in for a touchdown. Time was running out for Northwestern. A dream was flying away with every missed tackle, every missed blocking assignment, until the clock hit zero, and the scoreboard read 40-30 in favor of Ohio State.

The game lived up to all the hype that surrounded it. The outcome was not what Northwestern fans wanted to see, but from a neutral fan standpoint, this was Big Ten football at its finest.

[ MORE: Dienhart: Nothing was going to stop OSU on this night ]

And he?s right. Until the final play of the game, which resulted in an Ohio State fumble recovery for a touchdown, these two teams were never separated by more than 10 points. These are two very talented teams, but the Buckeyes are used to playing in these types of games. Urban Meyer?s team was quicker, more disciplined, and more efficient in big moments, capitalizing on 7-of-13 third down attempts (54 percent), compared to Northwestern?s 36 percent clip. They took advantage of their size advantage in the trenches, out-rushing the Wildcats by 154 yards.

?That front five right there, those guys are awesome,? Hyde said of the Buckeyes? offensive line. ?Coach told us just play for each other and that was our mindset the whole game, that we were going to play for the guys next to us.?

Hyde was the biggest star on the field Saturday night, rushing for a career-best 168 yards and three touchdowns. The questions about Northwestern?s defense being able to stop Ohio State?s potent rushing attack were valid.

The Buckeyes went to their bell-cow back time and time again down the stretch. They fed him the ball so many times in the fourth quarter that he had to be taken off the field on several occasions to catch his breath. His third and final touchdown run came with 5:22 remaining in the game, and put the Buckeyes ahead, 34-30. At that point, you got the feeling that Northwestern needed to put together a time-consuming scoring drive, because if Ohio State got the ball back with time on the clock, they were going to score.

The Wildcats had their chance. But a fumbled snap on a crucial 4th-and-1 with just over two minutes left in the game proved to be the undoing for Pat Fitzgerald?s club. The Wildcats recovered the fumble, but a booth review showed that the ball was indeed short of the chains, and the night would belong to the Buckeyes.

It wasn?t the outcome that the Wildcats were hoping for, but what a game. The best part of the college football season is when you can watch a late-night game from start to finish, with no affiliation to either team, and leave saying, ?Wow, that was a great college football game!?

With the win, Ohio State improves to 6-0 on the season and Urban Meyer remains unbeaten in his Buckeyes coaching career. But make no mistake, Northwestern isn?t going anywhere. This is the type of game that makes college football fans across the country take notice of the Big Ten conference.

Years from now, this epic Saturday night showdown may be remembered as ?the Carlos Hyde game? or ?the 4th-and-1 fumble? game. But it should also be remembered as a statement game for the Big Ten conference.

?It was a street fight, a 12-rounder,? Meyer said following the game. ?Anytime you survive 12 rounds against a team like this, it makes you tougher.?

Ultimately, it was that very toughness that led Ohio State to the victory Saturday night under the lights.

And for Fitzgerald?s Northwestern team, they will have their toughness tested again just seven days from now when they take on Wisconsin in what should be another Big Ten classic.

There?s never an off-week in this conference, and that?s what makes it so special.

Hope you didn?t have plans for next Saturday.